How to bond chickens to their coop?

I had 3 chickens that would get in the coop no problem. At the time I had no pop door and eventually a fox took one of them. Installed a door, and replaced the one with a young hen. Since then I've had problems with them sleeping outside.

I think it's the new one being dominant. How can I bond them back to the coop?

I would set them up for an extended sleepover with no outdoors for at least several days (3-4)
*Some might say longer.
They need to learn that it’s their home and a safe and cozy place.

Just keep putting them in at night, they get it eventually....
Usually it's easy, instinctive, they just do.
But then you have some that I swear have brains the size of peas.
I had a bunch of silkies that took forever when I initially put them outside with a temporary coop, every night picking them up and putting them in, then they got it.
Then I put them with the rest of the flock in the big coop, same thing, forgot they were supposed to be inside at night.
I don't get home till about 10pm, every night picking them up and putting them in, even during freezing rain looking like a bunch of wet rats they would huddle outside in the dark and not go inside the open door. And it wasn't like they didn't go inside during the day, they ate inside and used the nesting boxes. After a couple months they got with the program.

"Coop" them up for a bit (Pun intended!) and all should be fine. Maybe a week or so but a few days may do it too.

hmm... I think you need to think about why they may be choosing to roost outside. What's so appealing about the outside roost? If you don't want them to roost there, can you eliminate that roost?

You also mention a new chicken. How does everyone get along? Is there enough roost space that they don't have to all cram together if they don't like each other? When I added 2 new girls the 2 new ones would roost together in one spot and the old chickens would roost in a different spot, they all got along, but they would not roost together for months. They had enough room to be able to do this in the coop, but if not, I don't know, maybe they would have resorted to roosting outside or sleeping in the nest box.

Just some things to think about.

Some hens just prefer to roost outside...I just pick them off their chosen inconvenient roosting spot and pop them where I’d like them to be ...after about a week they get the message. It’s usually my new hens or chicklings that do this..the old ladies know where to go. ..I’m a big believer in allowing their natural instinct and as predators are unable to get into their run easily I do let them roost wherever in the summer here in Derbyshire (uk) I have a secure run , no coop door ..then in the morning they are let out into the garden.

@PirateGirl has great suggestions. I might also add that what I did/do is I have a battery-operated little night light that I put in the coop for a few days. As it gets dark out, then are drawn toward the light. It's worked great for me.

What are the actual dimensions of the coop: L x W x H? How many l.f. of perch in that coop? What does it have for windows and ventilation? How many birds? Have you done a thorough coop inspection for mites?

Coop dimensions are 36"x48"x48"tall, and nest boxes are separate of that. No windows. More than sufficient ventilation at the roof(picture attached). There's about 5.5 ft of perch for 3 birds, and they only ever use the lower perch and typically huddle together. I haven't searched for mites, but I just started using litter a month and a half ago. Until then it's been bare floor and haven't seen anything crawling around.

I've been putting them in the coop for about 6 months on and off. Some nights they go in, others they don't. I've found that leaving the exterior light on resulted in them going inside, and thought it was just too dark, but came out to find them on the gate again. 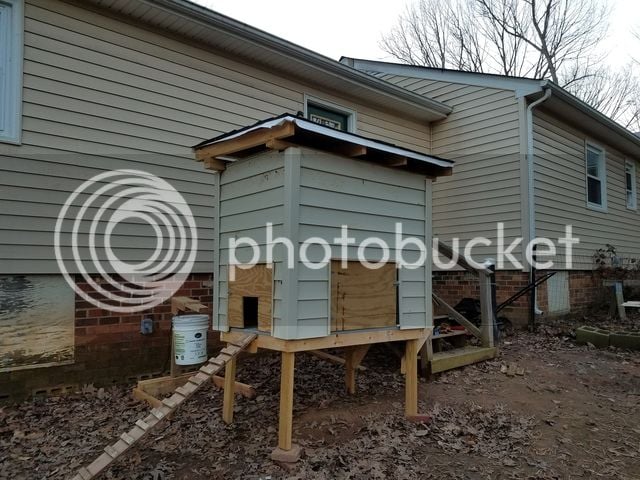 lazy gardener said:
What are the actual dimensions of the coop: L x W x H? How many l.f. of perch in that coop? What does it have for windows and ventilation? How many birds? Have you done a thorough coop inspection for mites?
Click to expand...

How would I inspect for mites?

Littles won't stay in the coop.
2

Sleeping on Coop Floor because of Bullying

Are Some Hens Prone to Laying Outside the Coop?