How to Raise Chicks

The first 2 days​
For the first 2 days of a chicks life, they don't need to be fed, because they'll live on the yolk that's still inside them. but you should give them heat.
On the 3rd day, give them immediate food and water.


Bedding--the good and the bad​
-Pine Shavings: they're a good choice, but just make sure the chicks don't eat them. You can stop them from eating them by putting soft dish towels or rags on top of a 1 or 2 inch layer of them, and then remove the towels when they are at least a month old, for they will be less likely to eat them then, rather then newborn chicks.

-Newspaper: don't use newspaper, it can create splayed leg, a common leg disability in chicks.

-Straw: it's okay, but doesn't absorb that well, so it will need to be changed regularly.

-Hay: don't use hay, as it gets damp and can cause fungal spores that can cause aspergillosis.

-Shredded Paper: don't use, it's clots together and isn't absorbent


Heat​
Make sure your chicks have a constant heat source.
Go down five degrees each week, starting at 95 degrees farhenheit.


Those are the basics. Ask questions and I'll do my best to answer them!
Hope this helps!​

I have been feeding a finely ground organic non-GMO starter that is about 20% protein since hatching to Java chicks who are now almost 4 weeks old. There are quite, but not fully feathered. They are inside on wood chips. I am free feeding in a large line feeder as well as giving them soaked feed 2-3 times a day. With them is a gosling of the same age, but not the size of course.
This is my first time raising chickens and geese. About when should I switch to grower?

henaynei said:
I have been feeding a finely ground organic non-GMO starter that is about 20% protein since hatching to Java chicks who are now almost 4 weeks old. There are quite, but not fully feathered. They are inside on wood chips. I am free feeding in a large line feeder as well as giving them soaked feed 2-3 times a day. With them is a gosling of the same age, but not the size of course.
This is my first time raising chickens and geese. About when should I switch to grower?
Click to expand...

It really depends which brand you're using.
Some brands require switching to grower feed at 12 weeks, while some at eighteen.

How often do you need to change the bedding? There are nine chicks in the brooder and they poop alot! 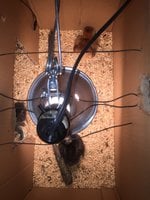 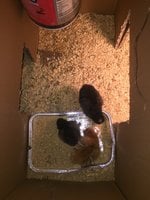 Speaking of bedding, we like to do things a little differently. What I've found seems to work really well is a combination of some fine, friable leaf litter or similar and some good, clean dirt (by this i mean free of chemicals, paint chips, obvious vectors for disease, etc.--like good organic garden soil). Preferably this soil comes from our own yard or garden in or near where the chicks will be living as adults.

If the chicks will be incorporated into an existing flock, we incorporate some of the old, active deep litter or earth from that system too. The idea is from day one to exposed their immune systems to small amounts of the coccidia or other organisms good or bad native to the environment they will be living in, analogous to probiotics or vaccination respectively--as opposed to brooding in an isolated, nearly sterile environment before abruptly introducing them to the native ecosystem later on.

The exact ratios or types of materials vary and are still something we will continue to experiment with.

But when dryish, a mix of soil (with all its native microbes) and fine carbonaceous material is excellent at absorbing moisture and odor--better than anything else we've used. This diverse substrate is also a source of natural grit and entertainment as they scratch over it (if bugs or worms in it too so much the better!)

We use enough to make a litter layer in the brooder several inches deep. it is stirred/cultivated with a garden handtool regularly if it gets caked. Depending on the size of the brooder box and number if chicks, it may be changed once or not at all before they go outside at around four weeks. Having a moisture-proof bottom of some sort is important.

We also rarely have issues with the dreaded "pasty butt" with this system, but its hard to say what if any part of it is responsible, though i do suspect a link with the access to soil. I can say that we used to often have those problems when we didnt use dirt but now almost never do...

I prolly missed a couple deets but thats the general idea... thanks for starting this helpful thread, and cheers!
Last edited: May 20, 2017

Chickening101 said:
It really depends which brand you're using.
Some brands require switching to grower feed at 12 weeks, while some at eighteen.
Click to expand...

Yeah, chicks do poop a lot.
To be extra clean, you could clean up the poop whenever they poop, but you can also clean it everyday or every other day.
It really depends on how clean you are.
Hope this helps!
T

If people do like scooping out poop and changing bedding every day, thats fine!

but...it really isn't necessary if you follow these three points: 1, provide a large enough brooder space for the number of chicks; 2, use a suitable litter substrate of some sort with both good absorbant and microbial properties (perhaps such as described in previous post); and 3, make it as deep as is practical or possible--then it can be "stirred" without needing to remove or add anything during the brooding period (since the key to manure management is really more about the ratio of bedding to poop, not the frequency of changing it). This is what we try to practice. and we NEVER allow it to stink (this is not good for the chicks)--or if it does, we change it promptly. actually it stinks less than when we used to do shallow straw or shavings over newspaper and clean it every day. but like i mentioned before, we dont normally have to empty it if we follow the above guidelines...

deep litter is used for full-grown chicken coops full of big birds with big turds, where it is never removed for years at a time sometimes. so there is no reason why the same can't be used in a brooder that is only occupied by tiny chicks for a few weeks--and indeed plenty of people do.

It has huge labor saving potential and i find it much smoother and natural to manage. if done properly its a lot more than just "lazy mans bedding"--it actually does a better job at managing smell and hygiene than many alternatives...

What food should I use?

Prevention dose of corid for chicks
2 3

Chicks don't seem to be eating food because its too large