Can you tell I am excited about my baby chickens?!

I moved to a small town in Texas last year after living in the Houston suburbs for 14 years. I wanted to have a little backyard flock for probably close to 10 years but our HOA restrictions forbade it. So, when we were looking for an old house that we could live in and renovate in a small town, the first thing I did was check the city ordinances to make sure I could have chickens.

I have been stalking this site since I ordered my chicks from MyPetChicken back in November. I ordered 7 chicks that arrived healthy and happy on April 12th: a Black Copper Marans (Princess Lay-a), a Blue Copper Marans (Bonnie Blue), an Exchequer Leghorn (Dixie Chick), a Blue Ameraucana (Betty Graybill), a Swedish Flower Hen (Mayzie) and a Cream Legbar (Daisy), and a Lavender Orpington (Violet). The Swedish Flower Hen was supposed to be Daisy, but I guess I was too excited to bother with correctly identifying my chicks when they arrived. By the time I realized my error 3 weeks later, the names had already stuck and there was no switching them around.

So far, it's looking like MyPetChicken correctly identified the sexes of my chicks. I had my doubts about Princess Lay-a (the black copper Marans) for a couple of weeks but am now feeling more confident that she is, in fact, a girl. Her nickname has become Hulk because she is that big - seriously, a giant next to her sisters.

My "official" reason for getting 7 chicks was that if a couple died, I would still have enough for a little flock and wouldn't have to reorder. My real reason was that I was completely unable to narrow down my selection of chickens I HAD to have to less than 7. I tried. I really did. My chickens' purpose will be to provide eggs and compost for my garden. They are far too young to lay eggs yet, but they are taking their jobs as poop producers for composting VERY seriously!

My babies are almost 7 weeks old now. They have been in their coop and 10W X 14L X 8-10H run, which I call the Coop of Paranoia (so named because it is completely enclosed in hardware cloth) for almost 2 weeks now. I intend to let them out for an hour or two a day in our enclosed back yard while I am out in it to supervise. Don't want to leave them out unattended as we have large hawks, raccoons, and a barn owl that lives in one of our trees.

And there you have it - a Texas-sized introduction from a Texas transplant.

And good luck to your chicks. My neighborhood doesn't allow chickens either but I just ignore their rules and got them i hid them in the backyard where their are tons of trees my neighbors don't seem to mind when the free range I've had them for a few years and no one can make me get rid of them

Welcome to BYC, and good luck with your girls.

Chickens are almost allowed everywhere in Texas...bill should be passed into a law by September.

Chickens are so addictive! i'm already trying to figure out the next breeds to add to my flock. so far I have Plymouth Barred Rocks, Asian Blues, Ameracaunas, White Leghorns, and Rhode Island Reds.

Thank you for joining us at Backyard chickens

Chickens are so addictive! i'm already trying to figure out the next breeds to add to my flock. so far I have Plymouth Barred Rocks, Asian Blues, Ameracaunas, White Leghorns, and Rhode Island Reds.
Click to expand...

Can I see your Asian Blues...a pic?

You sure have come to the right place for all the fun and learning! Good luck with your babies and we hope you enjoy BYC! 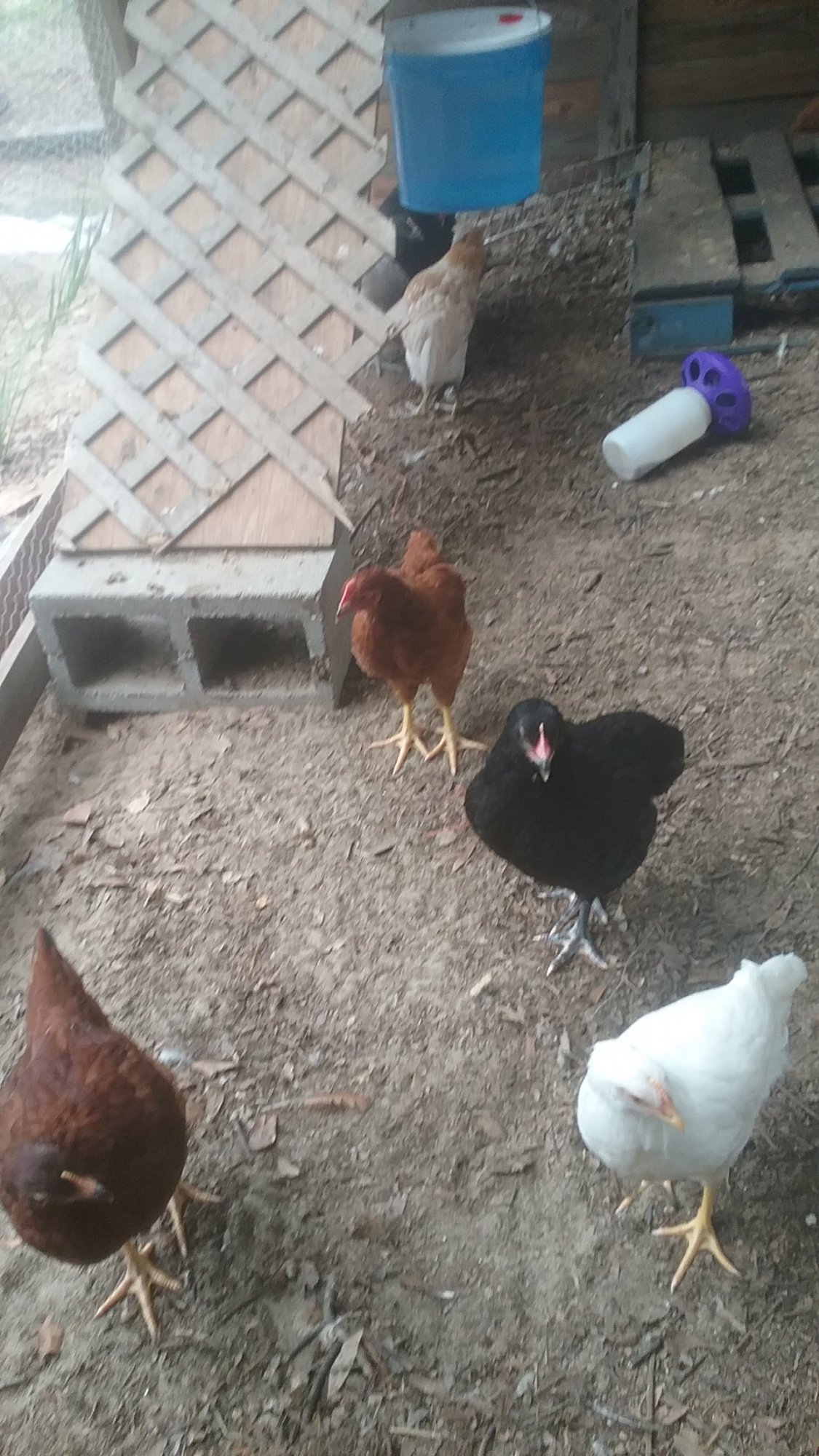 Norma Jean is the black chicken in the pic. I got two of these from Tractor Supply during chick days. I think they're a X between an Australorp and something else. i love their personallities though.
Share:
Reddit Pinterest Tumblr WhatsApp Email Share Link