Today I enclosed the underside of our deck with galvanized wire and made a door to go under it by removing a piece of fencing from the chicken run. This gives my birds and extra 10x12 feet of shaded space, which they really need in the hot NC summer months! They had a ball going under there and scratching all around.

In the middle of nowhere!!!

This is one of the reasons WHY I want a porch.....
We dont' have one, but I would so love to sit on a porch just knowing that I had chickens under there waiting for little treats to drop between the cracks......


They and You are gonna love it...

Any pics? Would love to see how it turned out. I have been considering the same.

I have a large covered front porch and also a large back deck. I have been considering fencing under the back deck as it is about 10x20 and would be a nice shady space for them. Also, it is enclosed by my "dog pen" which is just a playpen for my indoor dog. That has 4 foot no climb horse fencing topped with 8000 volt electric tape. And my property has perimeter 5 strand electric tape fencing also. Small dogs hop right between the strands in the perimeter fence but can't get over the 4 foot no climb with electric on top. Big dogs get nailed getting through the perimeter fence and would get nailed trying to go over the no climb.

If nothing else, I would have good dog protection. See? Pic is from before we added the electric. I am planning on letting the big fat hens who can't get any air flying roam in here supervised. It is 200 feet of fencing in a large oval, so is a nice sized area. 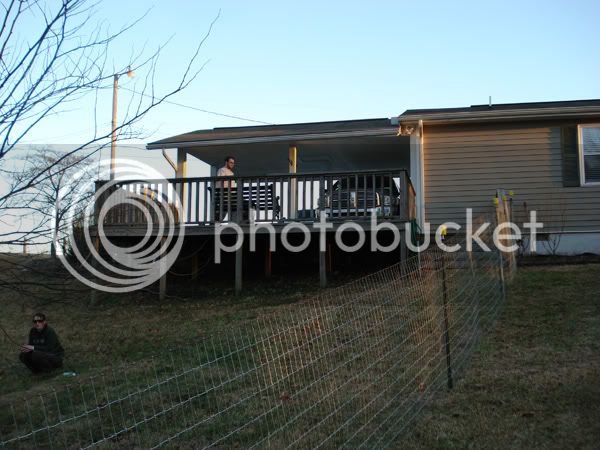 My front porch has lattice already, so would be okay once they are grown up and we reinforce the eletric perimeter with the the 4x4 cattle type fencing topped with electric. And it is about 8.5' by about 30'. So a nice sized space for them. Not predator proof for nighttime, but might be a nice playpen for daytime. Lots of bugs under there too! And as the porch is covered, it would be a nice shelter from bad weather. I wonder if it would be warmer since it butts up to the house.....(pic was from after I added the railing...not yet painted!) 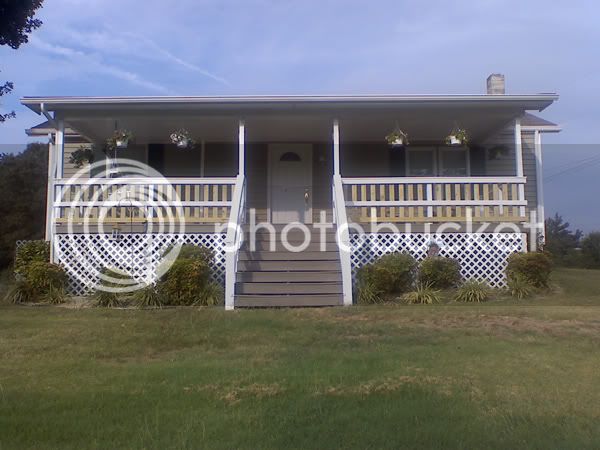 Maybe when I build my "real coop", I will use these as extra "playpens" to give them more space? Especially since I ended up with, uh, more than I expected.

The only thing I'd be worried about is the chicken smell right there by the house. Make sure it isn't humid under the porch and that it drains well

Quote:
No, I forgot to get some pics. I'll update with some in the next day or two.

Quote:
This is actually the first thing I thought of too when I read this.

I think if you had a small number of chickens there and cleaned (raked?) regularly, it would be reasonable. No different than the people who put coops right up by the house.

Otherwise it would be kind of gross if it was "overstocked" and/or not cleaned regularly.

You need to consider some sort of easy access into the area under the deck for people so that you can clean up - otherwise it would be a real chore. Plus you will probably need to be sifting through there daily to find eggs when they start to lay - not all hens lay inside nest boxes. They do have that knack of finding the most inaccessible little nooks to lay...

The doorway is big enough for chickens and people. Our coop & run is right up beside the house and we went through having it there last summer. Flies... that was the worse part of it. We learned to NOT use the doors at the back of the house during fly season. We only have 4 chickens so far, 2 standard & 2 banties, so coop/run clean up isn't too bad.

I'll definitely have to be on the lookout for hidden eggs under there... my banties are notorious for hiding their eggs!

My husband did a grand job.