I'm very sad today. I lost my first chicken - and way too soon. She was just turning two years old this spring. She hadnt been feeling well for a little while so I took her to the vet yesterday. Her only symptoms were being tired and having trouble getting up on the roost. I thought maybe she was injured or eggbound. She had a lot of fluid in her abdomen. I watched the vet drain some out but there was a lot more that would have to come out. Today he went in to see what was going on and said she had ovarian cancer. He could barely tell which organ was which. Since her ovary was so messed up, her egg yolks were releasing in her body and rotting. She died while he was in there. I sort of knew last night that she probably wasnt coming home. She was so tired she just slept in my arms. I got to hold her for a while before I left her with him yesterday. Poor girl. At least I got the easy way out this time and didnt have to make the decision to put her to sleep, although I knew I was going to have to probably tell him to do it. I feel better knowing what was wrong and that there's nothing going through the rest of the flock. I know some people will think I spend too much money on my girls. But I think it's money well spent if it helps me to know how to diagnose problems better in the future. Being new to chickens I feel so overwhelmed with all there is to know and watch for. So far, things have not gone easily with them. I'm hoping that this will be the last problem for a long while. I just want them to be happy and it's heartbreaking to see them not well.
Thanks for listening. 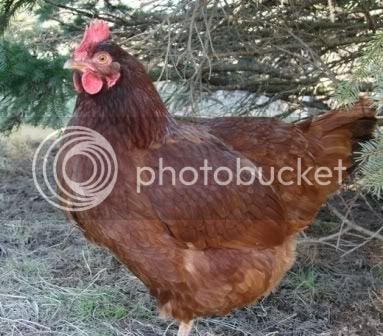 someone should make a memorial.

She was so pretty, I'm so sorry you lost her at such a young age.

I'm sorry, it as always so hard to lose a beloved pet...

What a beautiful lady, I am so sorry you lost her,

I'm so sorry! I lost my first one when he was about 6 months old... not including the couple of chicks I lost.

I'm sorry for your loss.

It's tough to lose friends isn't it?

So sorry to hear this, she was a beautiful lady. You have my sympathies.

I'm so sorry for your loss. She was beautiful!!

My Chicken Has Cancer!!

Can vets test chickens for cancer etc. ? Anyone have a good experience at an avian vet?

My chicken suddenly died today & I don't know why

Finding lost chick!? How can i locate her at this time?
2

Ill chicken, totally lost as to what to do