Ideas on how to landscape and/or "decorate" my PLAIN coop!

We built this coop last summer. It's 8x12, and houses 5 BA and 5 RIR girlies. It's nice, insulated, windows on both sides, etc etc....more pics can be seen on my BYC page.

But, it's very plain, I have not done anything in the way of landscaping it yet. It is right in our front yard area, for all to see. The run faces our house, the other side faces the road. I would love ideas on plantings, an easy to put in walkway (stone type maybe?), maybe solar lights on each side of the door, it obviously needs SOMETHING! It still does need some trim work on the sides by the soffit...you may notice this. 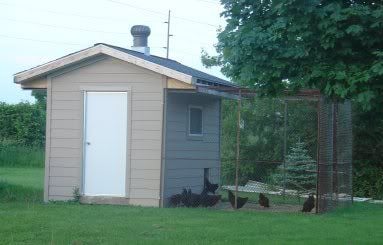 Maybe put a mamosa(spelling ?) tree to the side of it. Those are so pretty and will give some shade as well. Maybe get a climbing flower and put it in the front where it faces the road. Have it climb the side of the coop.

I'd add some annabelle hydrangeas to the opposite side from the run. They get about 4 ft tall, take amazingly little maintenance and give a nice soft look to an otherwise plain wall.

I don't really like landscaping around the run as then you can't really see the chickens....

Walkways aren't terribly difficult. I happen to like the look of flagstones (easy to get in our neck of the woods) with the grass growing between, but you'd have to trim the grass with a weed whip. I just installed a cobblestone walkway into my vegetable garden, fashioned from flat-ish rocks that were unearthed from my backyard. I spread sand between the stones. It's really quite pretty.

I like your idea of solar lights by the door. Maybe something old and "farmy" looking over the door instead of on each side? Or maybe a handpainted sign over the door? Could be fun.

If your chickens don't free range, you could do small flower beds on each side of the front door.... I wouldn't really recommend it if they get out of their run, though, because it will be gone pretty quickly... I think that pink geraniums would be pretty beside your door. They are large (mound shapped), perennial, quick growing and have nice flowers ALL SUMMER LONG.

Thanks for the replies so far! Not having a green thumb, I gotta look all this stuff up!

Flagstone...that's exactly what I had in mind. With the cracks in between. Looks more rustic looking!

And I agree, I don't really want to do anything with the run, because it would block my view of the girls. The backside would be ok....but I want to see them. But I'd at least like to plant something on either side of the door, and on the road side of the coop itself...just to give it a little something. I like the idea of a sign. Originally I was thinking like two solar hanging lights, one on each side of the door, and some sort of signage above the door....something "chicken-y," but I have no idea what!

I've even considered doing some painting on the inside, or hanging some decorations up (I know they'd get really dusty though!) because it's just plain white walls in there. I saw those "Wallies" wallpaper cutout things you can put on walls, but I figure with the humidity and dust, those things wouldn't stay. But I worry about painting anything, and having to move the girls because of the fumes. Guess I should have thought ahead there....so that may be out! But if I could dress it up somehow. I thought of a lightpole in front, or two, and planting some clematis there to grow up the pole, but that would be just another thing to have to mow around, and my hubby probably wouldn't like that! So guess I'll have to stay with something simple. I was thinking shrubs or something....but I'm open to ANYTHING that's not easy for me to kill!

Oh, and no, unfortunately the girls don't free range during the day....we live on a busy highway, and have a lot of predators around here...

Plant some sunflowers, like those really tall 8 foot ones and the chickens I am sure will enjoy the seeds they drop.

There are great signs on ebay if you don't want to paint one of your own....

I stenciled words inside my coop. The paint isn't thick, so it dried super fast.

What practical extras can I add to make a coop cute?
3 4 5