Last week my wife's 2006 Mazda5 started running really rough and we could tell it was misfiring. Check engine light came on and we took it to a mechanic. The error code was P0301 Code - Cylinder #1 Misfire.

He pulled the cap off the hole where the spark plug sits and it was gross inside. Oily gunky residue... looked VERY different from the other 3 sparkling clean cylinders. He cleaned off the plug and cleaned out the hole a bit. It looked as though there was a chip / hole in the "well" (cylinder) where the spark plug sits and could possibly be where the gunk was coming from. After things were mostly clean he reset the error code so we could do a drive and see if it was still having a problem. Well, the problem was gone... so that was good news.

Well, I was still very concerned that we didn't know how it got so gunky inside and also that there was that hole / chip in the wall of the cylinder. The mechanic thought it could have been caused by corrosion or a bad molding job at the factory.

We checked our warranty and it expires THIS MONTH... like in 20 days!!! So, I quickly took it to the dealer so they could check it out. I got a call back to come pick up my car and here is what I learned:

1. Since the error code had been cleared they didnt have proof that there was really any problem. (Obviously there is a problem the cylinder is a TOTAL mess compared to the other ones what good will the code do them?)
2. They noticed that there is water, moisture got inside the cylinder. Spark plug looks rusted outer side. Tech removed it and spark plug looks normal. (Well, they is way more gunk in there than just water and rust!)
3. They dont have proof that the hole in the cylinder wall wasnt caused by some other mechanic during service. (Looking at the hole it sure doesnt look like any mechanics tool could have caused the hole maybe a dentists drill, but why would a mechanic be using one of those?

)
4. The car had been in a minor fender bender (old lady backed into my wife in a parking lot) and they are saying that might have caused the problem. (No way that a fender bender could have caused a hole like that in the side of the cylinder)
5. If it was a manufacturer default/problem it would have shown up a long time ago. (I dont know that I agree with this. If it was a bad mold at the factory and water, coolant, oil, whatever finally made its way through and got bad enough to cause a problem couldnt that take a while?)

So, Im hearing all this and it sounds to me like Im getting the run-around to avoid them having to do costly service to my car at least not until it is out of warranty and they dont have to pay for it.

I talked to the service manager and said Id like him to look inside the cylinder with me. He said he didnt need to because he trusted his technicians and could go by what they wrote. Well, they didnt write anything about all the oily gunk and nothing about the hole in the cylinder wall. He said any mechanic could have caused the hole and I asked him to look and see that there is no way that could be the case. Again, he said he didnt need to look. I asked how Mazda decides what is and isnt covered under warranty and he said it is his decision. I pleaded with him to look into the cylinder and was adamant that there was no way for him to make a decision without all the information or looking at the actual problem. He said the decision is his and that he didnt need to look and that it wasnt covered.

So, anybody out there work for a dealership or know about this stuff? Am I wrong with any of the above (Im not a mechanic and am just making observations as best I can)? Is there anything I can / should do before my warranty expires in 20 days?

Below are two pics: The first is of the dirty hole. The second is of the other hole (clean) but with the rubber cable thing that was down in the first hole (dirty).

Ill try to take a better picture of the sidewall of the hole. 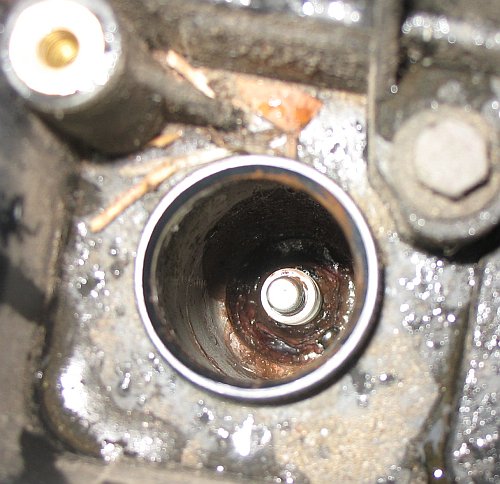 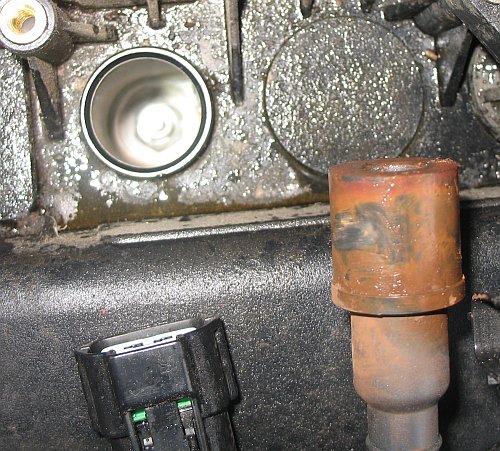 Yes, it does sound like you are getting the run around. Can you get him to sign something saying he won't look at it? (yeah, I know, fat chance.) I would see if you can have your mechanic write a statement for you. (I'm guessing he is a trained technician.) Then I would take the statement to your dealer. Maybe even send it by certified mail, so the date is on record. You might have to take them to small claims court, so you need to start a paper trail.

I hate it when people are unethical.

Have bator, will hatch

I had a problem with my Chevy HHR a couple weeks ago. I told the service guy: the door locks on the back doors don't always lock or unlock all the way when I use the FOB or the button on the front doors... PLEASE FIX IT... He gets the car and has a tech look at it and comes back to me a little while later... "sorry ma'am, we can't get the doors to do what you said they are doing. we can note it on your car's ticket and if there's a problem in the future we can fix it" I raised a lil heck and said "that's not going to help me when the warranty is running out in about 10,000 miles!" He caved and fixed them both. I KNEW if he "noted the problem" it wouldn't be covered later.
Your best bet (if you ask me) is to call someone in the Mazda corp office... explain what happened (and how rude the service guy is being) and see if they can help.
there is a record of you bringing the car in the first time, right?

Nothing you can do if you didn't take it to the dealership FIRST. They have a right to say "no it's not covered" if you take it to someone else first. Like it or not, that may be the best you get from them. Sounds like time to trade up...and NEVER buy another Mazda again.

I've seen bad castings with both heads and engine blocks. It's uncommon but it happens. Oil would leak out and mix with moisture that condenses in there when the car is cold.

The good news is it shouldn't cause any major problems if you keep it clean. The gunk buildup probably shorted the plug and reduced the intensity of they spark, thereby causing that error code.

As for the dealer, I would consider it a manufacturer's defect in the engine casting and threaten legal action if they don't replace the head. Scream loud enough and they will listen. You can also try other dealers. Dealers vary a lot from town to town.

Rob, carefully and throughly detail out what happened and send it to the corporate office certified mail. Then you will have proof that you reported the problem BEFORE the warranty expired. Go from there. With Toyota, when I did that, over a horn falling off they wanted to charge me $300 to screw back on, corporate made it right eventually.

If it were mine, I would now take it to an ASE certified shop and get them to check it out including a pressure test of the cooling system. If they find anything, then take the report and the vehicle back to the dealership and ask them for the contact number for the regional service rep. Water in the cylinder is not good and we all know that. The computer isn't going to show anything until the water renders the affected parts damaged and the service manager knows this. It isn't going to throw a code after enough water gets in there and glues the rings to the cylinder wall resulting in a stuck engine.

I wish you luck with this>>>

Quote:
i think your pics might be reversed but i can see the difference. and i certainly do believe they are giving you the run around at the dealership. what reason would you have to take a 4-5 year old vehicle in to have that kind of repair where a mechanic would cause damage like that! looks like metal fatigue/crack could cause that. my dad works with inspecting metal on a grander scale and he also fixes cars/motorcycles.

when you took it in the first time and had them check and then 'reset' the code they should have a record that was done if you paid for the service. if you have the bill of service i would take it back in with you and speak to the manager again. they should not be refusing to submit something covered on your warranty if it was mechanical failure and it was OEM to begin with.

the only way i believe they can 'null' your warranty is if you had broken parts while racing you car or using it in ways you shouldn't. and they do not have to fix or cover parts that aren't genuine Mazda from them. i found this a few years ago while looking into my Subaru Impreza and someone mentioned that because they had racing stickers posted on their car their broken turbo charged Baja (still under warranty) wasn't going to get fixed by the dealership they bought it from.

i don't know if you bought your car new or used but this may help.
http://www.ftc.gov/bcp/edu/pubs/consumer/alerts/alt155.shtm

and according to MazdaUSA.com
http://www.mazdausa.com/MusaWeb/displayPage.action?pageParameter=ownersWarranty&bhcp=1
notice under the 'parts & accessories' section. if you've never had this part repaired/replaced by anyone other than the dealer i would seriously complain to someone higher up a that dealership!

Thanks for the great feedback and ideas everybody! Honestly, we really like the vehicle and since buying it have seen 3 other peeps at church get the same one. I just hope they never need service from this location.

I'm going to think this over a bit and will either go to a mechanic that specializes in Mazdas and get his thoughts and hopefully a letter of some type and / or go to another Mazda dealer and insist that they look into the cylinder with me and:

Otherwise I want them to find and fix whatever is causing the problem before their magic warranty period ends.

Some Feedback Please on These Design Upgrades
2