We have 10 days left in Auckland and easy access to certain breeders and stock, so... I made an impulse buy, of sorts, from our local exotic bird shop.

With my last hatch, I realised the limitations of my tiny broody who can only sit 7 and shipping eggs usually being sold by the dozen. So, I got myself a basic incubator, curated the temp and humidity with calibrated sensors to ensure it stayed in the sweet spot, but only achieved a hatch rate of 30%. Could it have been better under a broody or were my shipped eggs just doomed by inter-island travel? And are there any broodies better than Silkies? None of my other girls are putting their wing up, so I drove on down to my local exotics shop because I know they breed silkies and frizzles - and who doesn't want a 'fun' chicken? (I needed grower feed anyway - who knew 5 week olds could figure out how to cheat their way into a grandpa feeder set above their weight).

They're a bit picky with their girls, don't sell them till POL and in the POL pen were a few whites and 3 blue silkies. I've been wanting to add a bit if blue to my flock and missed out when my Orpingtons all came out black, so yes, yes, yes!

The flock's having a bit of a transition phase at the moment. We lost our 3 older shavers over winter, leaving our 3 year old white silkie, a 2 year old SLW which was hatched by said silkie, and a 1 year old project hen based on breeding a NZ equivalent for Ayam Cemani.

Our recent incubator hatch gave us four golden campines - two pullets and two roos, and 2 Black Orpington - one of each.

These babies have been super quick to integrate, only needed 3 days of isolation before they were safe to blend in with the flock. And did I mention this was at 4 weeks old? They're 5 weeks now and having their first night in the coop - lots of tears, but they've settled in under the nests and seemed quite cosy last I checked.

Well, I got her... A lovely patchy blue hen who I really need to get pics of. Her name is now Pom Pom and Pom Pom took over the integration pen no longer being used for the chicks.

Now, my cemani girl, Morticia, is head hen and defensive of her spot. She had some interesting behavior when we introduced the chicks and seemed to have it out for the little roos, but brought that up to 11 for Pom Pom. She puffed up, dropped a wing and did a very interesting little strut. My husband and I were perplexed. The shavers were only ever 'murder mode' when we did integrations.

I gave them a few hours like this, with a short fence between them, till evening when I opened the fence to see what would happen. There was a bit if squabbling, a little neck tugging, but it seems our head girl just wants respect and isn't out for bloodshed. With me there playing rooster, she behaves herself and Pom Pom quickly learns she can run to me and Morty will back off.

There was a bit of mingling. The babies might still be a bit too young to care about flock dynamics and happily accepted Pom Pom. She would give them a 'outta my way' peck on occasion, but mostly found them safe company. My other silkie, Foofy, was pretty much indifferent. She had a good look, then went in her way doing her own thing as she does (quite an introvert, that chicken). The SLW, Boo, has had one go at her, but ususlky just fluffs up when she gets near, but isn't one to chase. She lets her get within a foot before staunching her out. With Morty, that's a meter... And will chase her for about 1-2 meters, then give up the pursuit. My run is quite fun - lots if places to break line of sight, moderately planted with big bushy plants like lavender and a giant kaka beak my birds live under most if the day, and perches with ramps scattered about like a jungle-gym.

I think I've either hit the jackpot for agreeable chickens, or the girls think it's about time I brought in more hens! Needless to say, mingling is only going to happen when I'm there to play rooster for Pom Pom, but not looking like it'll take long.

Still haven't gotten my frizzle though... They had one in the "no sale\too young" pen. Going to try to convince the poultry manager to let me buy them when he's in on Sunday, but apparently he likes to keep frizzles for breeding... Will push my luck and see how I get on. They looked to be around 8 weeks or so. I think there was one a bit younger in another pen too. Fingers crossed!

Oh, and did I mention we're moving soon and currently urban? Technically there's a hen limit and no roos here, but we back onto rural land and my run is very generous. With a pheasant cock in the back pasture, I doubt anyone will be complaining with us being out in a week.

Our new home is hectares of land and they'll be getting the 10 metre greenhouse for their new coop - all in all, around 30sqm, so heaps of space for new additions.

The boys will be getting the current coop (made to accommodate 6 hens) as their own little boys-only clubhouse.

Just need to sort runs for them once we're up north and we should be away! Predators seem to be a big non-issue as it's next to reserve and everyone traps in the area (and aren't catching much, apparently). I do love how predator-free NZ is compared to other countries. Hawks will be my only worry and a covered run will sort that out.

Now if I can only think of a creative way to get through the half-eaten bag of starter crumble left over....

I seriously need to get a new phone with a working front cam... So hard taking pics with a selfie cam alone.

That's our little orpington roo hanging out in the background. 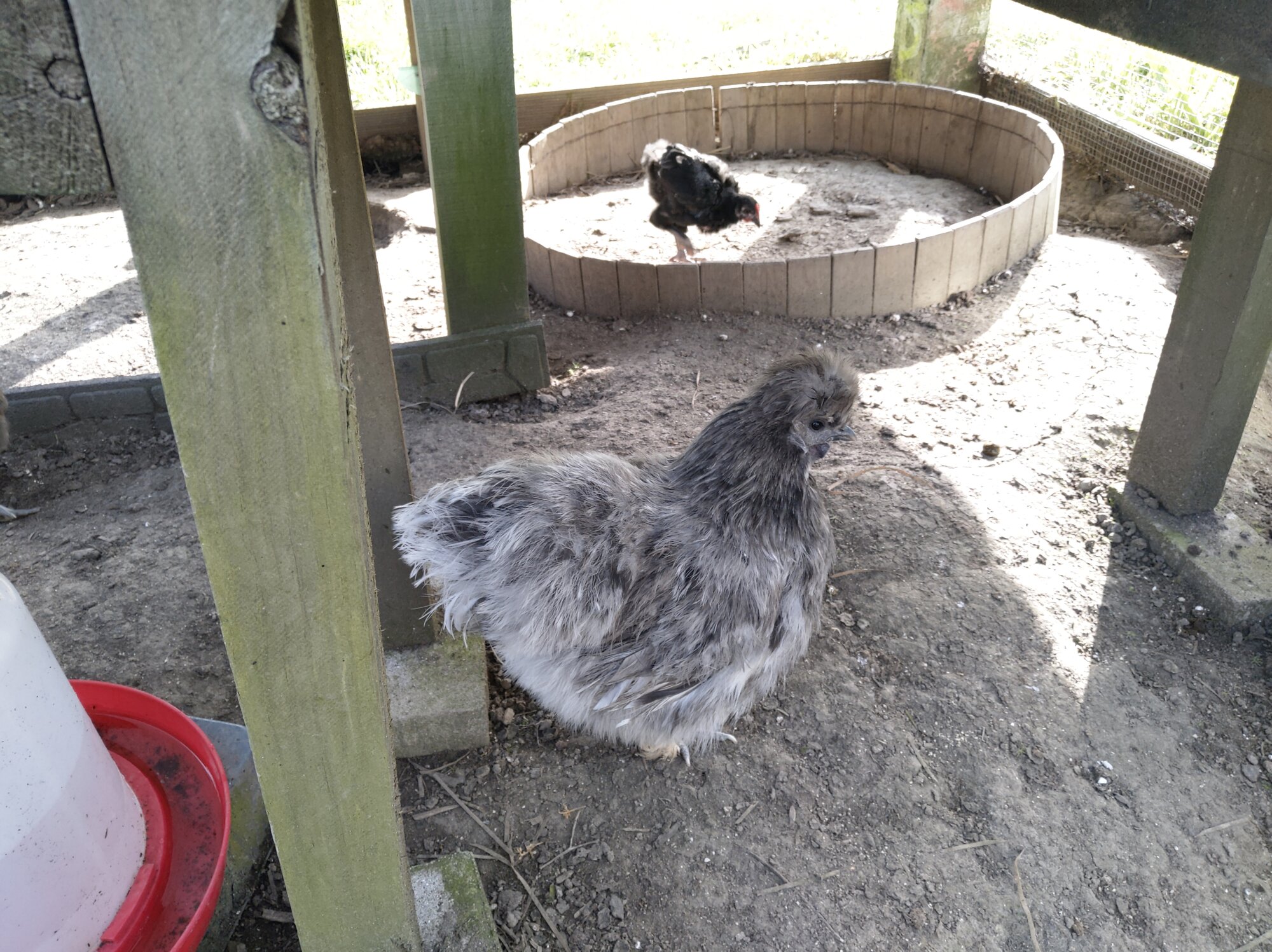