Hi Everyone,
I'm new to this group and new to duck life. Meet Duct and Tape! They joined our family the first week of August when they were a few days old. They're our only ducks and very imprinted on each other.

About three weeks ago, Duct was fine when he went into their nighttime duck house, but limping when he came out the next morning. He was quite lopsided! No cuts or punctures, no signs of Bumblefoot, so I assumed he had sprained or twisted his leg. I increased his Niacin and applied Prep H. A week later, he was about 40% improved, but I was still so worried and so new at duck stuff that I took him to the vet. (Tape rode along and accompanied him as his own emotional support duck!)

The vet examined his leg and said the muscle felt really tight, so he was diagnosed with muscle strain. No breaks or dislocations. The vet said he'll gradually work his way out of it, said swimming would be good exercise for this, and prescribed Meloxidyl.

It's been a week since we saw the vet. Duct has definitely but gradually improved - standing on it more, getting himself in and out of the pool, and making his way into the yard for mud digging/bug hunting. Well, I don't know if this started today, but today is when I noticed the injured leg is really swollen. It feels hot, but I don't know if that's just where he's been laying on it.

He's been swimming today, has a great appetite, is talkative, has mighty wing flapping strength (actually caused some windchimes he was under to spin), is alert, seems very content chilling with Tape in the pine shavings. He does not seem "sick." I'm wondering if being more active (especially jumping in and out of the pool) has caused this muscle strain to flare up and that explains the swelling...or do we need to go back to the vet?

Any thoughts would be appreciated.

You could confine him in a small cage for a few weeks to heal, best if they can all see each other when in the cage.

Or put both Into small enclosure . What did form of niacin are you using? And Welcome!!

I would also confine them to a very small location, with nothing to jump in and out of.

Also, I would call your vet and ask what he thinks about the swelling. He will probably just tell you over the phone if you need to bring your duck back in.
D

Wouldn’t hurt to give him some liquid BComplex it’s great for leg. Health. TSC has best one we’ve found 1ml over a small amount of a treat so he gets full dose. You may. Have to ask for it some stores keep it in the cattle dept others where they keep meds. 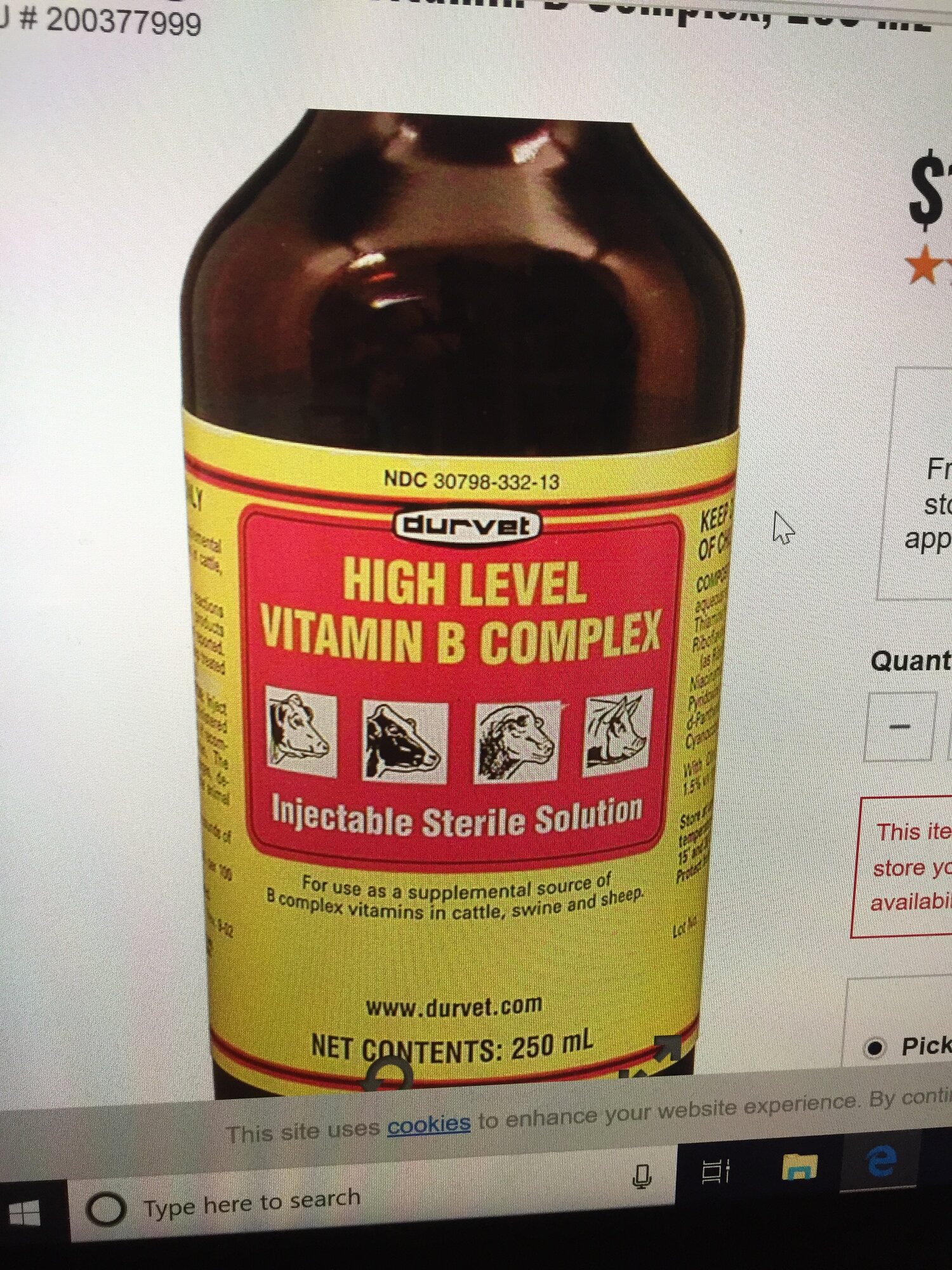 What does that do??

It support leg muscles which Pekins can have problems with. Because of weight and also because they may have a niacin deficiency. This can happen when they are young duckling and can be very noticeable and sometimes not so much. But if it can help even a little worth. Using
D

Thanks so much for all the feedback. I'm really glad I found this site. I was wondering if he needs a more focused convalescing and not so much freedom to keep restraining this leg. Your input confirms that, so they're now together in a smaller area and seem very content. Duct got some good R and R this afternoon, too, and the swelling has gone down some, so that's encouraging.

I was already planning to go to TSC in the morning and will add the liquid B3 to the list. As for what kind of niacin I was using, I now think it wasn't the best. It's a capsule and we were dumping the contents into their water, but it's a flush free and I just read that they need the straight up B3. So that's what we'll get. We did use these capsules back when they were a few weeks old and showing signs of a deficiency and both made remarkable turnarounds, so I assumed it was okay to use, but maybe not?