Injured or Vitamin B Deficiency ?

I have a Jersey Giant/RIR hen. That started to limp a couple weeks ago. While she walks her toes roll under her and other times it's almost like she flicks her toe forward and has a normal step. I had hoped that alittle time would help with the problem but it doesn't look to be the case. So i have her confined to a small space now 3x4. I used vet wrap and wrapped her middle toe and up her leg. This helped alot with her walking. I tried a splint under at first but it looked to be causing her foot to fold under so I removed and just went with wrapping it. She is still eating and drinking fine.
After some reading I came across some post about Vitamin B Deficiency. Figuring it wouldn't hurt I gave her a dose of .5 ml of the following. My dosing was based upon some calculations I did from another product by rooster booster B-12. 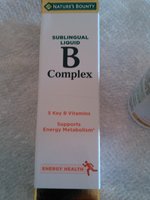 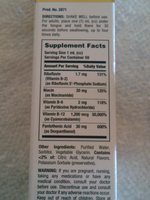 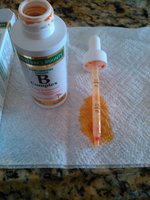 The .5ml(cc) was basically just a few drops which i put onto bread pieces and gave to her and she had no problem taking them.
This was also $10 for the bottle compared to $20 for the B-12 supplement from TSC.
Anyone else use this product? How did I do with dosage? Also should I give that amount only once a day or twice maybe? Any ideas would be great.
FYI , Vitamin B Deficiency is also common in vegetarians so I guess it makes sense that depending on what the chooks are being feed it can happen to them also.

It does sound like a nerve problem, which could be injury related if there is a pinch somewhere, or could be illness or deficiency. Either way, vitamin B complex is good for nerve health and will not hurt your birds, as in they won't overdose. I have only used this product in ducklings. I believe I did the whole dropper twice a day for the bird that had visible problems. I don't remember exact dosage, but I would give it twice a day to keep the vitamin B in their system. In my case I noticed improvement within a few days time. Hopefully someone else will chime in with an appropriate dosage.

I think it is injury related but not 100% sure as I did not see it happen. It could be the Jersey Giant in her as to me it seems her middle toe is long as heck compared to the other chooks. One good thing i believe is as I was holding her toe to wrap it I could feel her trying to curl her toe on me. At least it seems she does have some strength in it.

Your dosage of 1/2 ml is more than enough given daily to get riboflavin into her. You could even go down to 0.25 ml daily. It is hard to overdose B complex.

If it is riboflavin (B2) deficiency, the treatment should be started as early as possible for the best chances of recovery. It usually occurs in both feet with curled toes, and walking on the hocks or knees. Mareks disease can also present this way, but hopefully it is just a deficiency or an injury. Let us know how she gets along, or if any new symptoms occur. Here is a good link about riboflavin deficiency:
http://www.thepoultrysite.com/publications/6/diseases-of-poultry/217/vitamin-b2-deficiency/

Did she ever recover?

Brahmachicken240 said:
Did she ever recover?
Click to expand...

Yes I believe it was an injury, still has a slight limp while walking. One if my best layers. I am actually going to incubate a couple of her eggs this week. I think it was more of a hip verus toe/foot injury. Or something like a slipped tendon that did heal right.

Does this look more like Marek’s or a vitamin deficiency?
8 9 10

S
Help! Turkey being treated with vitamin B deficiency

L
How much vitamin E, B vitamins and Selenium should a 10 day old chick be getting? Help Please!