The husband got the walls up this weekend and it is a little different than I expected.

I thought the front wall was going to be 8 feet tall, then the back wall a couple feet shorter to make a sloped back roof.

Looks like the front wall is going to be 9 or 10 feet tall and the back wall will be 8 feet! So it is a really tall coop!

What can I do to take advantage of it? Roosts all the way up to the ceiling? A "loft" over half the coop so they have more floor space?

If I do the loft idea, should we make a ramp up to it? Or would a ladder of roosts be sufficient for them to get up there?

They will roost as high as they can get, especially a roo.

If you create a loft up there they will just go up there and roost and nest in it. Hmmm, figuring square footage you just might have plenty of room for a few more chickens in that high roofed coop house.

I'd make a loft and use it for storage. With doors to block off access. It'd be a nightmare to clean if the chickens get up there. And it would probably be warmer in the winter if the ceiling were lower than 9 feet.

Hmm, yeah, my husband was saying storage, but I was with Miss Prissy on the more sq footage = more chickens aspect.

I'm just looking for someone to tell me that it would be SO much better for the chickens to turn it into extra living quarters!

Put a little weight behind my argument. C'mon internet, don't let me down now!

Finally got a picture of the work in progress. He is building an 8x8x8 cube, then adding 2 feet to the front wall so we can have a sloped roof and some ventilation.

He now wants to run a spiral ramp up around the interior edge of the coop. I'm not sure why... Just because he can I guess. The interior design debate will be open for a while I suspect... 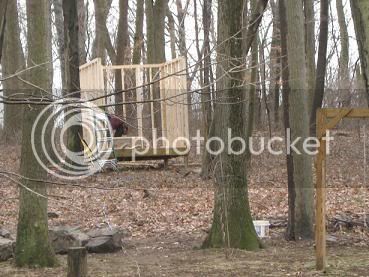 So every time my husband comes in the house for another beer or something, the plan changes...

The coop will still be 10' high on one side and 8' on the other, but instead of putting wire mesh and a flap to open and close for ventilation for the last 2' on the tall side (like we initially planned), he is going to put real open/closeable windows on two sides (east and south) of the coop.

Since the chicken and human doors will be on the north side, I figure that should be plenty of ventilation.

And now he mentioned putting in a sky-light

At this point I think I will just hand him my credit card and tell him to show me when it is done.

Well, you could make it a two story chicken coop - more chicken space.....? Be a shame to waste all that height! ?

What a fun coop building. Dear Husband is really into this, isn't he? I vote for giving him full rein so he can enjoy the entire process. After all, he's doing all the hard work, isn't he?

I can hardly wait to see what the final coop has in the way of chicken amenities.

My dh got really into building our coop-mind you we did have 3 of our old banty girls stolen, so it prompted us to build closer to the house. Let him go wild! It looks good so far-keep us posted with the progress.

I'll keep updating with pics as we see progress. This weekend he got all 4 walls up. Next weekend being Easter, not much is going to happen.

We did get some good ideas from shadetree's coop thread. I showed DH the pics of the inside of their coop and he agreed:

That seems a much more sensible arrangement than some of the stuff we were thinking of.

But as things seem to change hourly around here...

J
How much ventilation does a small coop need?
2