Is that a chick's egg?

Hello to everyone! I found a small egg in my coop today. And I have 2 chicks in my coop for 6months. You think this is a chick's egg? 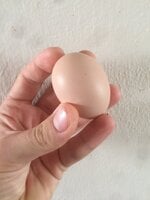 Nope - either a pullet egg or the egg of a hen about to take a break in the laying cycle.

LightSussexBR said:
And I have 2 chicks in my coop for 6months.
Click to expand...

A 6 month old female bird is called a pullet, not a chick.
<scratcheshead>
Actually, I call all the female chicks pullets as soon as I know they are females.
I guess you could call them all chicks until they stop peeping...or lose their down.

Normal behavior for an easter-egger mother