Is this cuckoo Marans a rooster? (I am STILL undecided!)

I've been trying to figure out if my three marans are roosters or pullets. I can't remember when I got them, but I think they are about 3 months old now...maybe a little less. I think they hatched around the end of March?

The one on the left has two identical twins. The one on the right is the only 100% for certain rooster. He is starting to crow, he makes a little alert noise when the girls get upset and runs to see what the problem is, and so on. 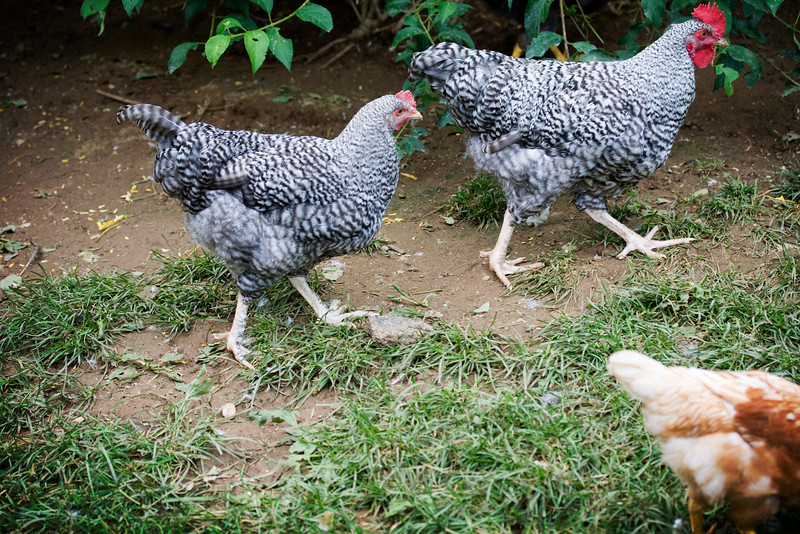 For the one on the left and its two twins...

Tail feathers--? They don't look exactly like the rooster but they also look rather droopy for a pullet tail.
Neck feathers--I can't tell, the barring throws me off.
Comb/wattles--red and somewhat large, but not as huge or as rapidly growing as the rooster.
Legs--seem to be the same thickness as the rooster
Personality--none are pre-crowing, they make little pullet-ish noises when you hold them while the rooster almost honks and has a deep voice
Coloring--For Marans, all four of my birds are light...none are dark like pullets. They are all the exact same shade including the rooster.

So what do you think? I am getting ready to trade three of them for (hopefully!) pullet chicks of the same breed, but I want to be sure that they are definitely roosters before I do that. We are kind of attached to them, I'm sad to say goodbye! They are such sweet chickens.
Last edited: Jun 17, 2009

I think that the one pulling up the rear is a pullet. If those chickens are siblings and of the same age, there's no way that one could have that much more of a start on his comb and wattles than if the others were roos. His is redder and much, much larger.

They are from the same hatch (I assume siblings) and they are the same age. They also eat the same food and drink the same water. lol

The one in question has saddle feathers. I've never had a Marans pullet or hen that light of a color.

both roos, I had a hatch like that and I convinced myself the one with the smaller/lighter comb was a hen despite the lighter typical rooster color. "She" is now crowing and doing other rooster things so I guess I can no longer hold out hope!
Last edited: Jun 17, 2009

That's what I've been thinking all along...maybe the 3 with the smaller combs are just slower developing roos. Or maybe the one with the huge comb is just extremely manly.

im thinking it's a pullet