Is this wry neck in goose?

This is Amelia, my sebastopol gosling. She is almost 4 months old, is 1/3 the size of her clutch mates and doesn't have any feathers yet, not to mention her neck is all crooked. Anyone seen this before? A ll the wry neck pics I have seen go down, not sideways like this...

Probably. But i can't find any posts on wry neck in geese. Wry neck is usually a result of injury to the head, from a vitamin deficiency, or from a disease such as Mareks diease. I would get her on some vitamins, especially all B's E, and if you can find E that has selenium in it, that would be good. You can buy selenium by itself, but you have to be careful not to overdose them. Here is a good source for info (be sure to note the add in the vitamin part for Vit. E with selenium): http://oureggbasket.blogspot.com/2013/04/wry-neck-or-crook-neck-understanding-it.html

Pammmely, I’m reviving this thread because your gosling looks just like my baby.

This is Casper. He is 3 1/2 weeks old, and developed a crooked neck 2 or 3 days after hatch. I believe he is very small for his age, he still has yellow down, and his eyes look sick. He can eat and walk, but stumbles a lot. His bill and legs are very pale and I can see veins in his feet.

He had a difficult hatch; he was a day or so late and I had to intervene to get him out. His shell was still full of blood vessels and although his yolk was fully absorbed, by the time I got him out, there was a fair amount of blood in the shell and he was very weak. He wouldn’t eat the regular mash I give babies so I fed him Kay Tee Exact for Baby Birds for the next week just to keep him alive. I’m wondering if there is something essential to geese that the Kay Tee doesn’t supply.

I have been giving Casper the wry neck regimen of prednisone, vit E and B-complex, and selenium for two weeks without improvement. He can stretch his neck out but won’t keep it that way. BTW, he does not stay in this brooder all day. In fact, he makes regular (walking) trips to the duck pen to see his buddy Tiny, he stays in a dog crate in the living room in the evening, and he sleeps in a cat carrier by my bedside at night, although that’s going to have to change soon because his poop output is becoming unmanageable.

He is the product of either a father-daughter or brother-sister mating. The mother is 1/2 Chinese & 1/2 African. Her brother is the same parentage and her father is pure Chinese.

So, I guess what I’m asking is, how did it turn out with Amelia? Casper isn’t the prettiest gosling in the world but I’ve gotten very fond of him. He follows me around like a puppy. 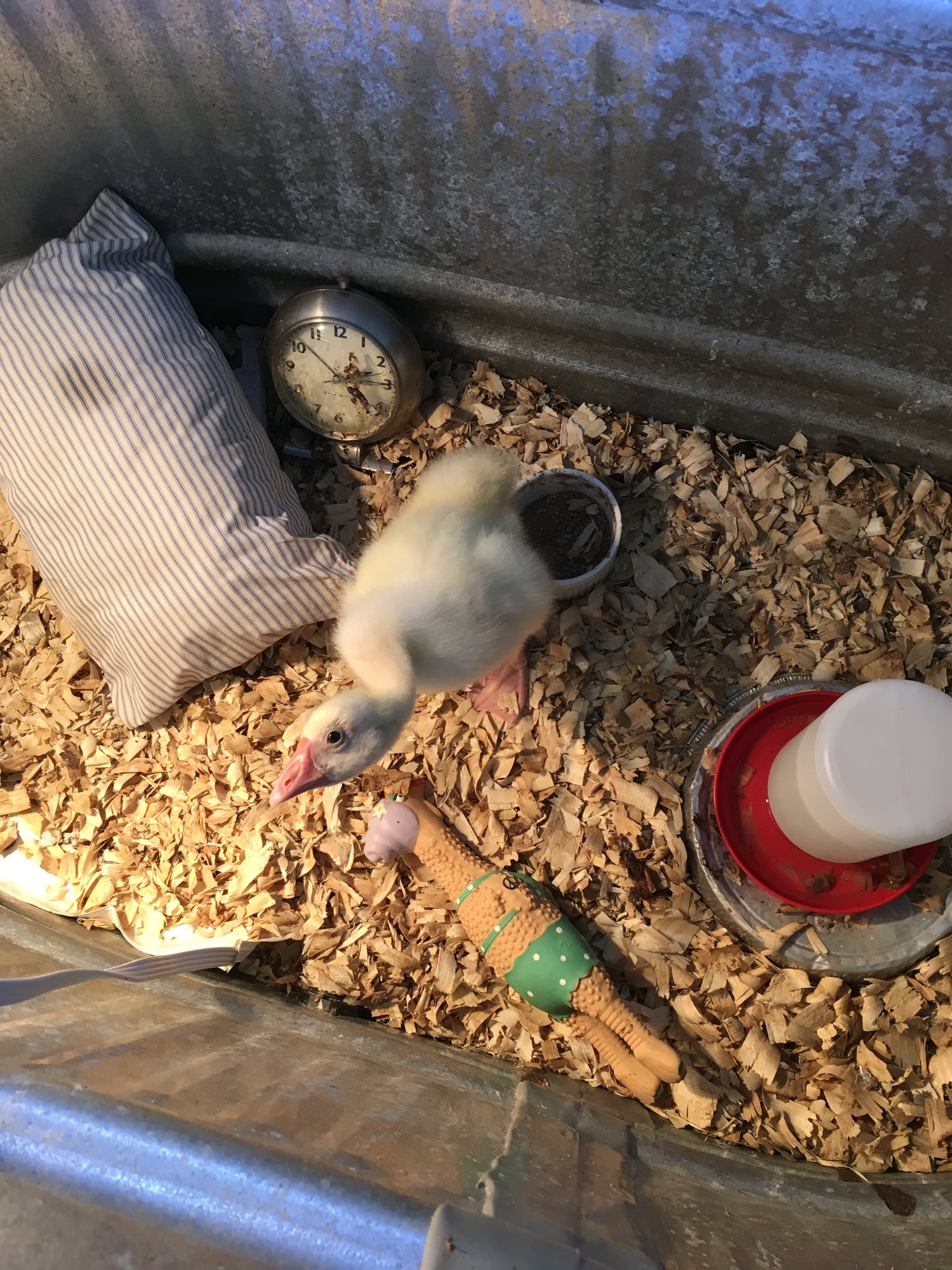 Hi there, I am dealing with an older gosling with a bad case of wry neck similar to these photos. I have it separated from the flock and currently getting lots of vitamins and herbs to help try to correct. Wondering if you guys were ever able to correct this? if so how and a time frame?

Hi, queeny... unfortunately, after a few weeks, my gosling eventually got much worse, despite my best efforts. He began losing his balance and tumbling around, which frightened him so much that he began screaming, or perhaps he was in pain. I was forced to cull him. That REALLY hurt my feelings. Hopefully you will have a better result.
D

I have a goose, seen in pic, has a few good days then he ends up like this amd we have to go set him up and shortly after he falls over again. This is like your goose that you had to cull?

Sorry, I can’t really make out what’s going on in the photo. Does the goose’s neck kind of make a little jog? Mine didn’t have balance issues until near the end.
D

quackenboss said:
Sorry, I can’t really make out what’s going on in the photo. Does the goose’s neck kind of make a little jog? Mine didn’t have balance issues until near the end.
Click to expand...

When he loses balance and falls on gis back his neck cork screws and he struggles to get back up. Sometimes he can and sometimes he cant.

Hello everyone! I’m writing here because I have a goose that I rescued. He has a crooked neck that is identical to the original posters. I am in south Florida, and he was surrendered to the sanctuary I work at on a day I was out of town. I never got to meet the owner and ask questions about how this happened. I have no clue if it’s congenital, the product of wry neck, or injury. Has everyone’s geese in this thread already died or been culled? I am wondering if maybe someone here surrendered their goose and I currently have him? I can’t imagine that this exact deformity happens this often. Just a curious poster. Thank you