One of the goose eggs in the Hovabator hatched!

And there was another one pipping when I left. That one, unfortunately, may have problems. My boss (gotta love that man) decided after a few hours, to "help" by taking his fingers and flicking the egg along one side to crack the shell.

un
He mentioned that it had been trying to hatch for a while and I told him that it is possible to safely, chip a bit (shell, not membrane)around the top section to make it easier. He told me to go ahead and do that. When I looked the egg had 4 or 5 cracked craters where he had flicked it to crack the shell. I could see a little spot of blood on one of them.

The gosling was still moving and peeping, so I peeled a bit of the membraneaway from the bill, but just enough to make sure he could breathe ok. Then I added more water to bting the humidity up a bit. Seems someone told him that you should remove all water the last few days before hatching! *sigh* sometimes I REALLY hate haveing 3 days in a row off.......

The other one is doing fine. I had put it in the brooder with the chicks but had to put in a divider cuz the nasty little boogers were pecking the poor things feet. Can't even stand on them yet and they are being pecked! If none of the others make it (6 more eggs + the pippping one)once he's a couple days old and can fend for himself, I'll try to put him back. Hopefully, I will be able to set up a seperate brooder for them. Maybe my boss will give them to me.....

I'll get pics, Goslings are so cute, clumsy, but cute!

Congrats on your goslings.
But your boss is an idiot.

Show us some photos! I have 5 due next week and I am dying to see a gosling hatch!

Any news? How is it going?

LOL!Had to wait till I got home from work!
The one with the yellow, hatched on Friday morning and the darker one today (Sat) 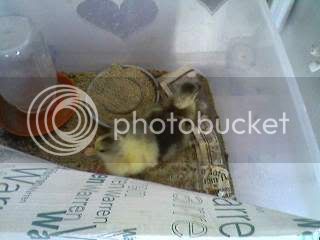 This little guy is hard to keep still!

And the new comer: 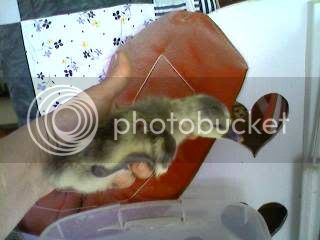 Then there are these 1/2 silkies that are turning into some interesting looking birds! 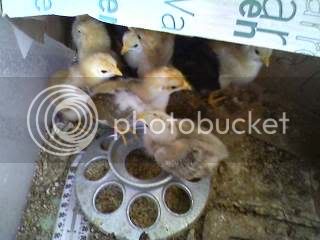 The mother is a white Pekin and the males we have are either brown chinese or a mix of pekin and BC.
Goose eggs hatch around day 30 - 32. I wouldn't give up hope till at least day 35.

* Thanks, mw. May all your gooses be happy and hearty ones!!!!

D
Premature goose or something else??

Do I have a bad broody?