Ive decided to keep him :p

So i recently replied to a craigslist ad that was looking for a buff orpington rooster. I told them i had one for sale. She's willing to pay $15 for him. I've never paid much attention to him before. But he's growing on me. For the last two weeks, i've been letting him and his girls free range. In the morning, he greets me by stepping on my toes... he's wanting some food. (Oh well at least he gets that close). At bedtime, when it's time to close the coop doors... he sprints across the yard up to the house when he sees me coming. Then he follows me like a puppy back down to the coop to say goodnight.

I dont know if i want to let him go. Especially since hes the nicest, friendliest rooster i have. I have 2 roosters that attack me all the time. It's nice to have one that is so gentle.

Here is Andre the Giant 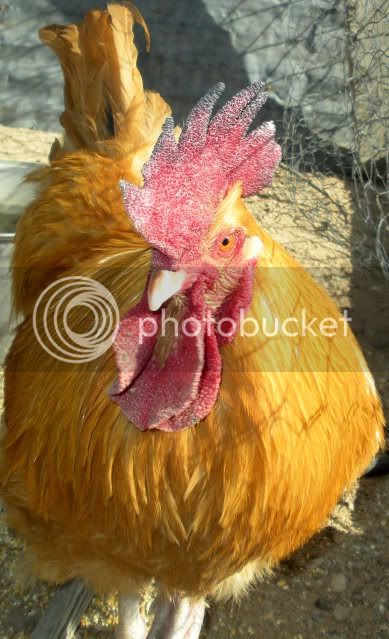 Queen of the Zoo

I personally would not let him go, even for $15 but all of my chickens are pets so I couldn't even think of selling one that I didn't have to. All the roosters that I have had to rehome broke my heart because I get attached to each and every one of them. I think $15 is pretty standard though for a full grown rooster or hen. At least that is the price I see around here and what I paid a piece for my 2 Light Brahmas.

If my BO was as sweet to me like your is-he'd stay! My BO 1 yr old roo-is NASTY!! he will attack anyone who goes near him-he was sweet as a boy-the only reason he is still around is he makes beutiful babies-I have 24 eggs incubating right now-can you give her one of your mean ones for cheaper and tell her you've changed you mind about Andre? I would-he is still your bird and she did not pay you yet right? I would GIVE my mean roo away if I could-

Quote:
I cant even get people to pay $5 on the roosters i AM trying to sell, that i wont even second thought rehoming. But i am having a hard time getting rid of him. I'm thinking of telling her he became Coyote Bait..... (heck i can make it his nickname)

Quote:
HAHAHA! My meanies are a leghorn and a giant barred cochin (yes the cochin was a fluke.... my daughter teased him and now he hates all humans....we used to hold him all the time)

I would deffinitly not let him go. He's a member of the family and he obviously likes you.

Haha--I would be honest and tell her your truly sorry but you've changed your mind-but would give her a great deal on another roo-different breed-BUY one get one FREE? that or send her packing to my house for a free BO roo! LOL

Quote:
haha! im in the process of looking into a free BO roo in a nearby town. I feel so bad, she was making plans to drive 4 hours to get here (i live in a tourist town) and she thought it would be a nice vacation....

I wouldnt leave him.

wish I lived closer-I have to use a large bright green round snow sled ( shield) to stop him-and he goes after that too! jerk-wad! His son "Fred" is awesome 9-10 weeks old and will replace him before the end of the summer-either way -he's outta here!