I've got a few breed questions (& one gender)

Hello BYC! I've got a few questions on chickens that have stumped me (not hard to do

) I got this group of chickens at the beginning of May, so they are about 23 weeks/6 months old. The roosters are mating my older hens (my broody just hatched out 3 fluffy nuggets!!) but the ladies aren't laying yet and I'm not expecting much until the spring anyways. Out of 10 chicks, We've got 3 confirmed roos and one cochin that is giving me trouble so we'll start with him/her:

1. The comb and waddles grew out extremely fast, long before any of the others, and then just stopped. They've been the same size and color for probably two months now. Docile temperament for the most part, no crowing or other roo behavior. Keeps to itself and none of the other roos bother it (either fighting or attempted* mating). I'm super unfamiliar with cochins anyways. Are those saddle feathers? Also, good example of a blue? I dunno. 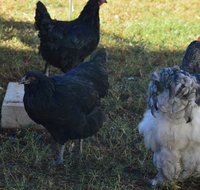 2. Logan, the Ameraucana rooster. He's beautiful and my boyfriend loves him, but isn't he just a leaky blue? Not blue wheaton, right? I don't even think the lady we got this batch from even had wheaton genetics.

3. What even is this chicken? He came from the same batch as Logan and my other 3 perfect blue/black Ameraucana hens but he's just awkward to look at (these pictures actually do him justice...). We thought he was just a super tall gangly hen (appropriately named Stilts) up until about 3 weeks ago when the saddle feathers started showing. And he started crowing last week (omg best thing ever

). He has to go either way, I'm just curious what happened to make this poor guy look so bad? I guess he'd be considered an EE? He was supposed to be Ameraucana.

1 is a cockerel. Either mixed color Cochin or Cochin mixed with something else.

2 is either an Easter egger or maybe an Ameraucana cross. He's not blue wheaten.

They are all beautiful birds!

You do have a Wyandotte cockerel as well.

Crazy for Chickens! said:
You do have a Wyandotte cockerel as well.
Click to expand...

That's news to me. Which one are you referring to?

cochin is a roo i believe. the hens take forever before the combs and waddles grow in, they are a slow grow and feather breed. the roos comb is a lot brighter the hens. i just got 4 cochins this year a few weeks younger then yours. and they all grow at different paces because of the slow growth. the roo of the mix developed the comb and waddles a while ago and the hens have almost none to speak of. I'm still new to the breed I'm just passing info I've got from research and from what I've seen. as for the others i have no answers XD

JedJackson said:
1 is a cockerel. Either mixed color Cochin or Cochin mixed with something else.

2 is either an Easter egger or maybe an Ameraucana cross. He's not blue wheaten.

Gorgeous flock you have there! LOVE the blues! I don't have any blues....

Wait - isn't it generally considered a good thing to NOT have the blues? I may need to talk my hubby into adopting a couple more... Oh, that dreaded chicken math...

heres some pictures of my cochins all the same age so you can see the difference in the comb developement. sorry if some images are blurred i have 2 white 1 golden laced and 1 i don't know what the coloring will be thats the one with the comb. mine are a good 3 weeks younger then yours i believe 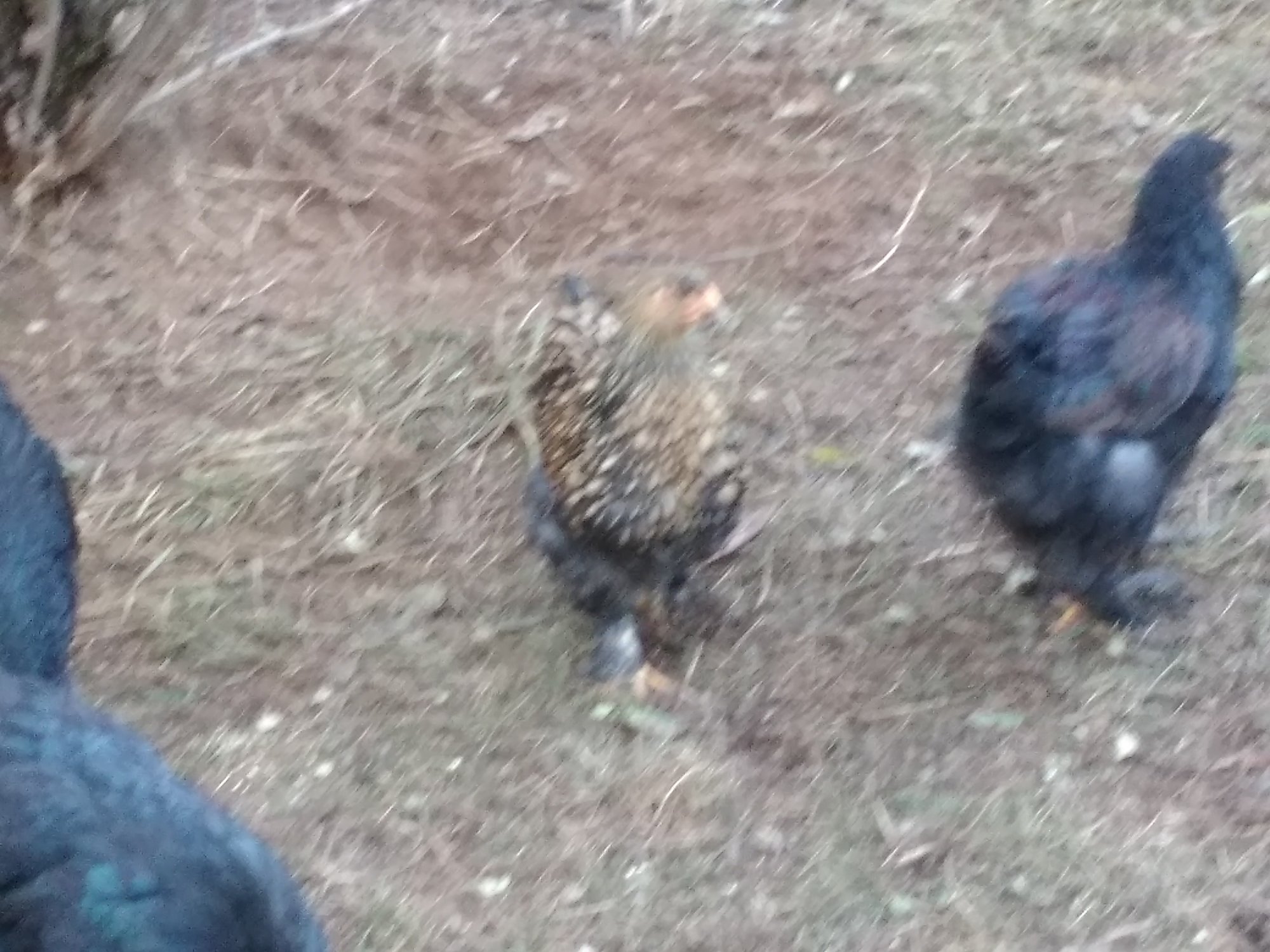 2 australorps on left , on right laced next to i think roo 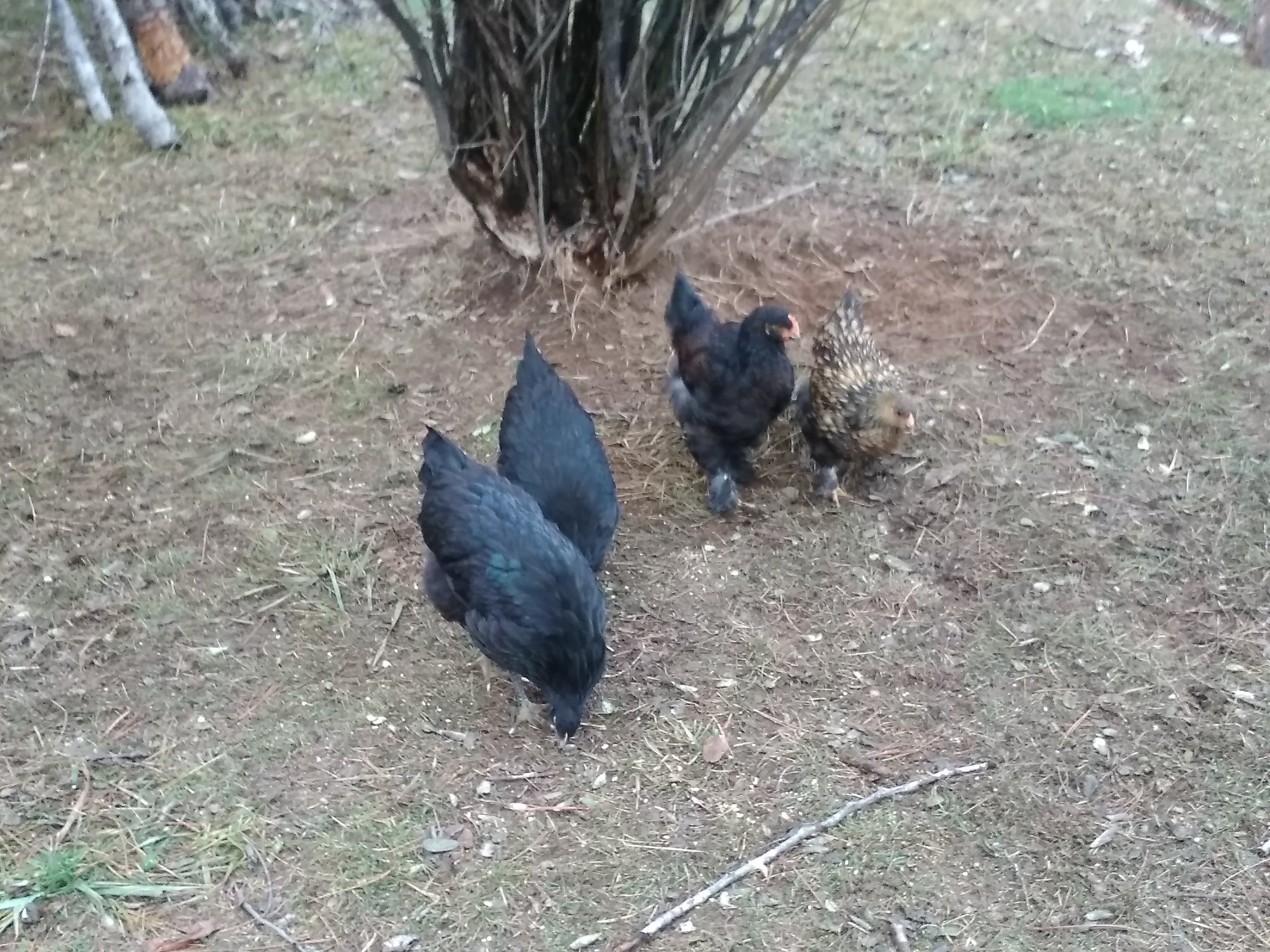 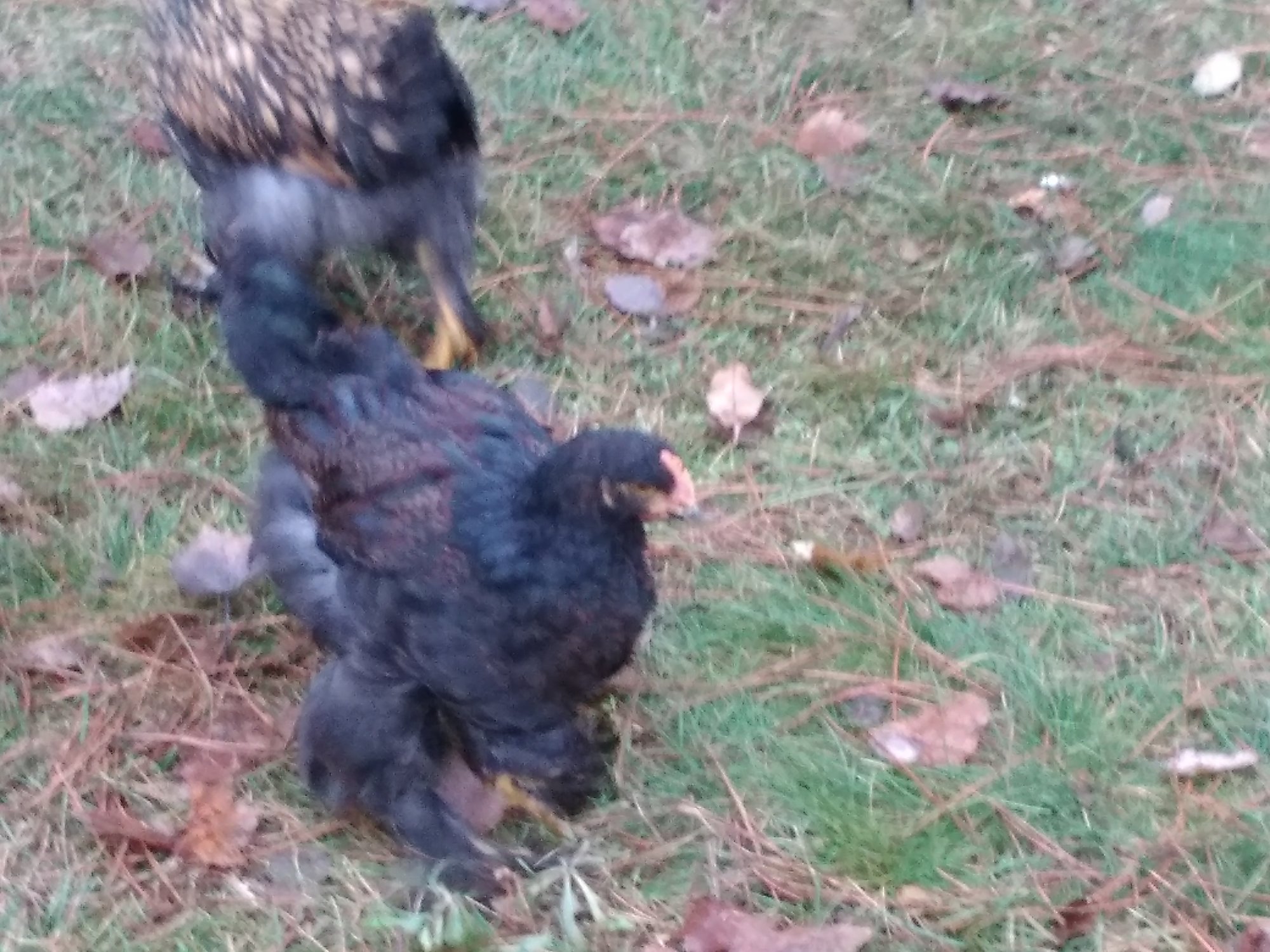 white cochin ( i couldn't grab pics of my other white cochin she's a runt and hides under my australorp roo. 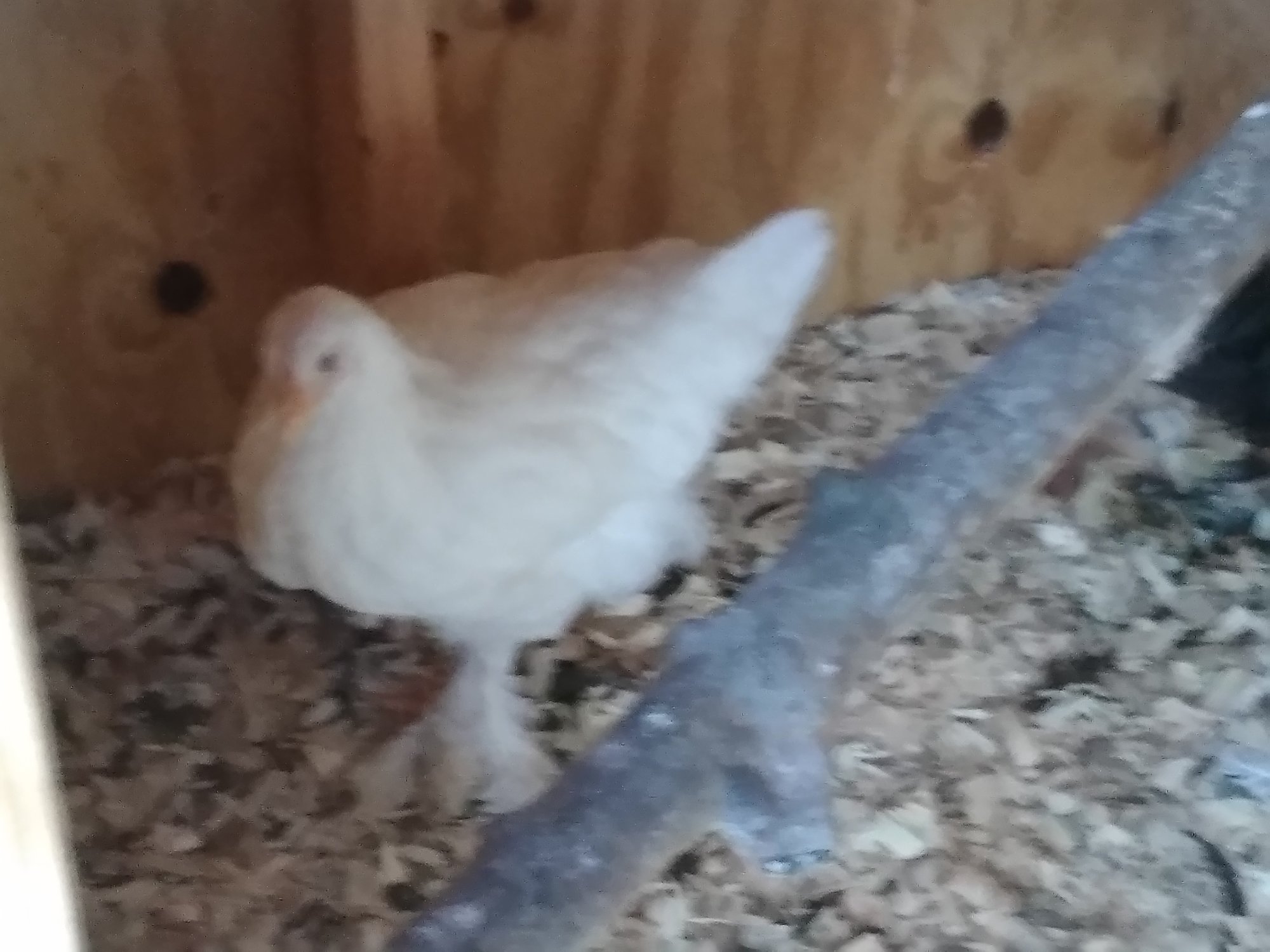 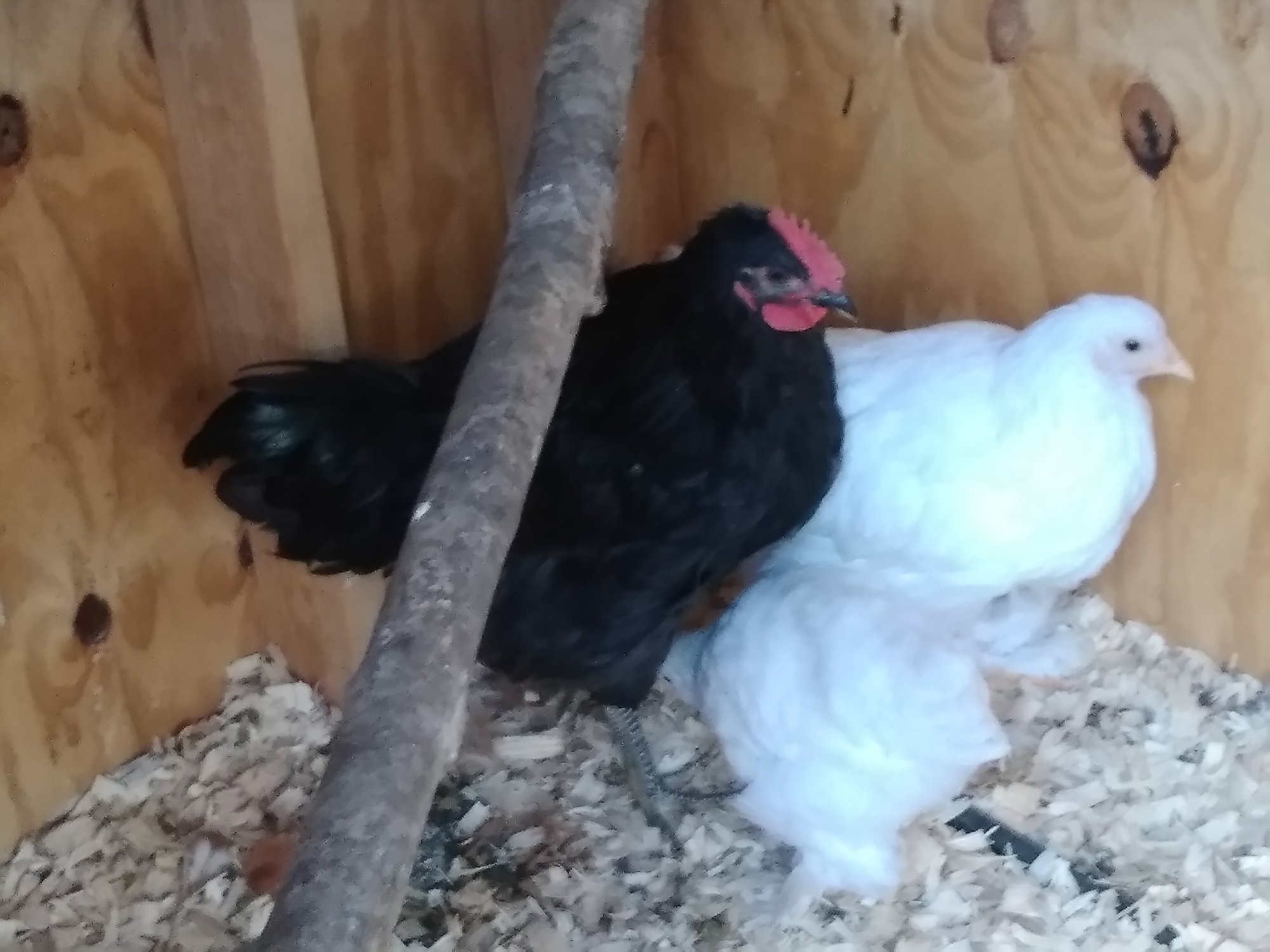 1. cochin cross
2. could be EE, but it also looks just like a blue ameraucana with a red gene without enough modifiers to cover it up. Usually you'd want blue ameraucanas to have a silver gene so the older they get they dont look dirty. A red or gold gene properly covered up with modifiers will estill ventually turn a blue bird into a blue bird with a dingy rusty color the older they get.
3.some kind of easter egger

1- blue barred cochin cockerel
2- he looks like a blue wheaten to me, but I could be wrong
3- easter egger

What breed and gender is our chick?
2 3