I lost my favourite girl this morning.

I've never been much of a bird person but when we moved onto the farm we had such a problem with ticks. I'd read that chickens were the solution. So I thought, 'Cool...pest control and free eggs...sounds simple enough.' Lol...boy was I wrong.

I only intended on getting 5 chicks...i came home with 23! Sure they were cute and all but still to me they were just chickens. I mean really? They just eat and poop right?

Anyway, I locked them up in my outside room where they'd be comfortable and safe.

Every day I went in to clean up and feed them...and thats when I noticed it...they actually have personality! Lol...i was beginning to enjoy this. I even started to identify which ones were my favourits and gave them names.

So I built them a coop and when they were old enough i put them in. I worried about them and was outside for any little noise I heard.

After a week I decided to let them start free ranging. What a joy it was to watch them chasing bugs and taking dust baths! I could sit and watch them all day!

When the hens started laying, I had one girl who simply refused to use the nesting boxes. She found her way into my kitchen every day and laid an egg in my cupboard! Lol. We called her Mary-Jane, MJ for short (yes, Spider-Man's girlfriend). I eventually just made a nest for her there.

I've had to contend with many preditors here on the farm in South Africa. Monkeys, baboons, birds of prey, jackals.... I've lost many chickens and learned from my mistakes. I understand the environment is dangerous and loss is expected.

But losing MJ today just broke my heart. And i saw it happen. A Caracal took her. I didn't care about the danger to me i just called for my dog to follow and ran after that wretched cat!

It dropped her but unfortunately it was too late. It had broken her neck. I've never cried so much for a chicken. Even my husband and son cried for her. I buried her in the yard.

Never thought I'd say it...but I really do love my chickens. They just get into your heart somehow.

Great story. Thank you for sharing.

I'm sorry for your loss of MJ. What breed was she? Do you have pictures you can share with us?
They do have tons of personality and can become dear to our hearts. It sounds like she had a great life with your family.

It is heartbreaking to lose a friend, even if that friend was a chicken. And, worse yet to have to see it happen. Been there. MJ will always have a special place in your heart, and I am sincerely sorry for your loss.

I wish I could make it better. It hurts so much to lose a dear friend. I can do this. Sending virtual hugs. 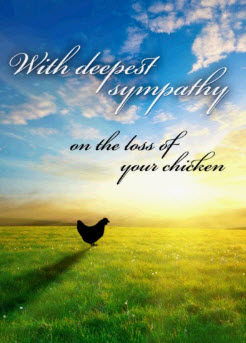 Sorry you lost MJ, she sounds like a special girl

noregerts said:
I'm sorry for your loss of MJ. What breed was she? Do you have pictures you can share with us?
They do have tons of personality and can become dear to our hearts. It sounds like she had a great life with your family.
Click to expand...

Thanks everyone. She was a Boschvelder. I'll see for some pics and upload them.

tray777tulip said:
Thanks everyone. She was a Boschvelder. I'll see for some pics and upload them.
Click to expand...

Please do. Again, my sympathies.

I'm so sorry. It's never easy to lose one of our feathered friends.

We all know how you feel @tray777tulip. It is just so easy to get attached to these cute little chickens, and it seems like the predators know which ones are our favorites.

I'm so sorry for your loss of Mary-Jane. She was a special girl indeed.

G
Stories of chicken running away?

My Chicks and coccidiosis