This is our Wheaten Ameraucana Lady Luck. 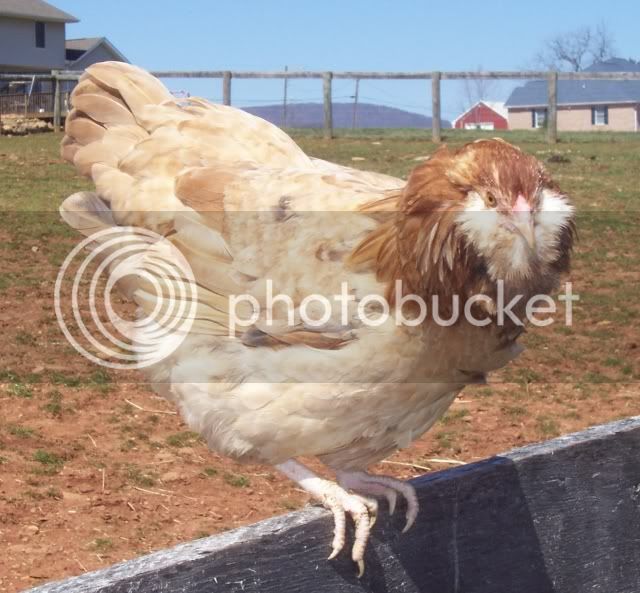 I purchased her and a Roo back in January. About two weeks ago, her Roo was killed by a dog. This left Lady alone and she truly acted like she missed him. She was in with the rest of the chickens but didnt really fit in. I know it sounds crazy, but when I would go in the run, she would always come to me and sit on my leg or my hand. Last week, I was in the backyard and she did her best to get through the netting that covers the chicken run in an effort to get to me standing on the other and almost got herself killed by one of our dogs. She was bleeding around her mouth, so I took her to the barn and put her in a cage alone to recuperate. Here is where her real story begins.

Each night when I would go to the barn to take care of the horses and the chicks (in the brooder), Lady would make all kinds of noise until I let her out of her cage. She would fly up on the top of the brooder or sit on the shelf while I worked. It is truly like she wants to be were I am. (I have never had a chicken act like that).

She now has the freedom to come and go anywhere in the barn she wants. The kids have a fort in the hay up in the hay loft. That crazy Lady heard them up there. She flew from the floor to the tractor and up into the hay loft. But she did not stop there. She heard the kids voices and proceeded to work her way through their path into their fort and she hung out with them. Amazing!

This past Friday, I separated the ducks into their own area as they are messy. Well Lady flew into the ducks area to check things out and she stayed ever since. It is as if she has adopted the 3 week old ducklings. She sleeps on top of one of the wood pallets that is the ducks temporary housing in the barn until I build their outside home. When they are out of their cage, she hangs with them constantly. This morning, I let her and the ducks out of the barn and filled a sled saucer with water for the ducks to have some fun in. The ducks took off and Lady followed. I snapped this picture of her. It was so cute. It was if she was saying to them What are you crazy kids doing. She was not happy until they were out of the water any safely sleeping with her. 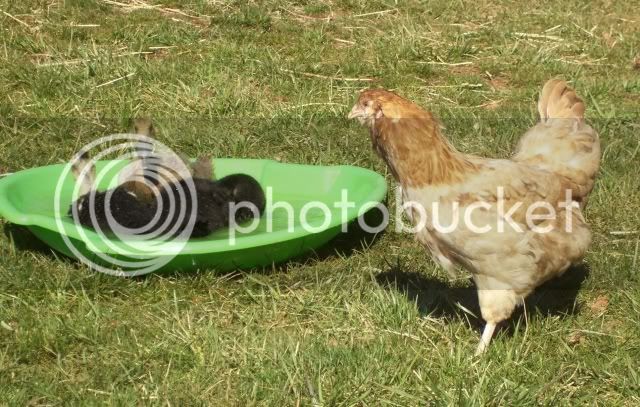 I know this is sappy and yes I am a grown man, but animals never cease to amaze me. She is the one that has managed to weasel her way into being more than "just a chicken".

I love her story. What a treasure of a hen. She's quite attractive, too.

Lady is a special girl!

What a precious story that is, I love it. Such a treasure you have there. Thank you for sharing!!

Thanks for sharing such a touching little moment. It really made me smile. All the best with Lady Luck.

I love it! Thanks for sharing.

I would be killing myself to find her a rooster so I could have a flock out of her........glad you own her.

The Wilds of Western PA

Thanks for the smile. She really is a beautiful hen. She has a sweet little puffy face!

Quote:
I was going to say the same thing... Time to start selling some Lady Eggs!