So recently we got new baby chicks, on the first of June. One of them, when we got them, was a bit smaller than the rest. Now, as they are a week old, we started noticing something was wrong. She wasn't drinking, has no interest in eating (unless shes doing it when I'm not looking). And she was very floppy, wasn't walking right. Then I noticed this large bump on the side of her chest, the right side. From just about any angle she's at, you can see it coming off her body.

Once we pulled her out and got her to drink water, she perked up a lot and was fine. But that lump is still there. She is definitely not growing like the rest of them, they have all lost their egg tooth and she has not, and she has (I think) yet to grow.

Any ideas on what it could be?

Could this "bump" be the crop?

What are you feeding them?
If you are feeding anything besides chick feed you need to add a side of chick grit.
Poultry vitamins work wonders for new chicks.
btw Welcome to BYC.

Yes, I also believe the "lump" you are concerned about is the crop which is located on the right side of the chest and is very prominent appearing on baby chicks. It is merely coincidental that you noticed it at the time your chick is also behaving in a concerning manner. In reality, the lump probably has no relation to the problem the chick is having.

You need to tell us what the chick's poop looks like, what you are feeding, including any treats and chick grit. What sort of water system do you have? Can you be sure the chicks can access the water?

Describe the chick's behavior with a bit more detail. Lethargic? Sleeping while standing up? Eyes at half mast instead of bright and alert? Peeping non-stop? Does it stand in one spot with wings held away from its body and its beak open?

Have you been checking for pasty butt? What is your heat source? Do the chicks have plenty of room to get away from the heat and cool down?

In addition to above excellent questions: size of brooder (exact dimensions) bedding, temp of brooder under heat source and at opposite end of the brooder. Breed of chicks. How are the rest acting? Any panting, ever? Wings splayed out?
B

It is definitely the crop. It was smaller this morning when I checked, then much bigger later when I checked again.
Her poops are solid, I wouldn't say hard, but theres no water or anything.
She is not panting, nor is she lethargic, she does run when I put her back
Eyes aren't half mast, they are open.
Her wings are definitely splayed out,
She is sleeping when standing up, I have seen her lay down and sleep but usually I catch her standing and sleeping, she falls asleep if you're holding her.
She peeps mostly when I pull her out to make sure she is drinking water, which she is, she does stop peeping when I put her in the box with the others though she usually isn't standing with them.
She has not had pasty butt, though one of the others did when I checked today.
She can reach the water source, I pull her out so I know she is drinking water but I have seen her drink from the water dish in the box.
Chick starter is her food
She is in a pool heater box, thats probably about 3 and a half feet tall with the heat lamp sitting on top. There is news paper bedding, flat, I lay out the sheets, layer them. We have done this with our other chickens, both sets, and everything was fine.
She is a buff brama. So we have two buff bramas and two cuckoo marans (one had pasty butt)
The rest are fine, they did have pretty full crops right now. But the rest are fine, showing none of the things that she is

I hope I got all the questions lol my dad is the chicken expert, I am just happen to be home most of the day so I see a lot of what is going on

She is in a pool heater box, thats probably about 3 and a half feet tall with the heat lamp sitting on top.

You need to make sure you are only heating one side of this box.
B

Ok, I adjusted the lamp so it only hits the one side of the box

They need a space to cool off. The heat can cause numerous problems if they can not get away from it.

You may have an issue with a brooder that may be too warm for the chicks. The clue is a chick that is fading and standing still with its wings held away from its body.

There are two things that can cause chicks to overheat. One is the lamp is too low, making it too warm at floor level. The other is a brooder that is too small in area so that chicks can't get far enough away from the heat source to shed excess body heat. They are like lizards at this stage. They need heat to raise their body temperature and cool zones in which to shed heat when they absorb too much.

These are crucial questions.
B

The box is about 3 1/2 x 3 1/2. Under the heating lamp it is 92 and in the other half of the box its 72. There are 4 of them in the box in total. We did move the heating lamp a bit, so they have more cooling off room but she still stands under it, wings open while the others move to the edges of the lamp, not directly under it but still keeping them warmish.

At first, I said she was constantly peeping, because I just took her, I took her peeping as she missed the others, but we pulled her and the other buff brama out and she kept peeping, not loud, like a light peeping. She could see the other one, she knew she was there, was rubbing up against her, but was still peeping.

Idk if this helps at all but this is what she does under the heating lamp. Like I said, she still stands directly under the lamp 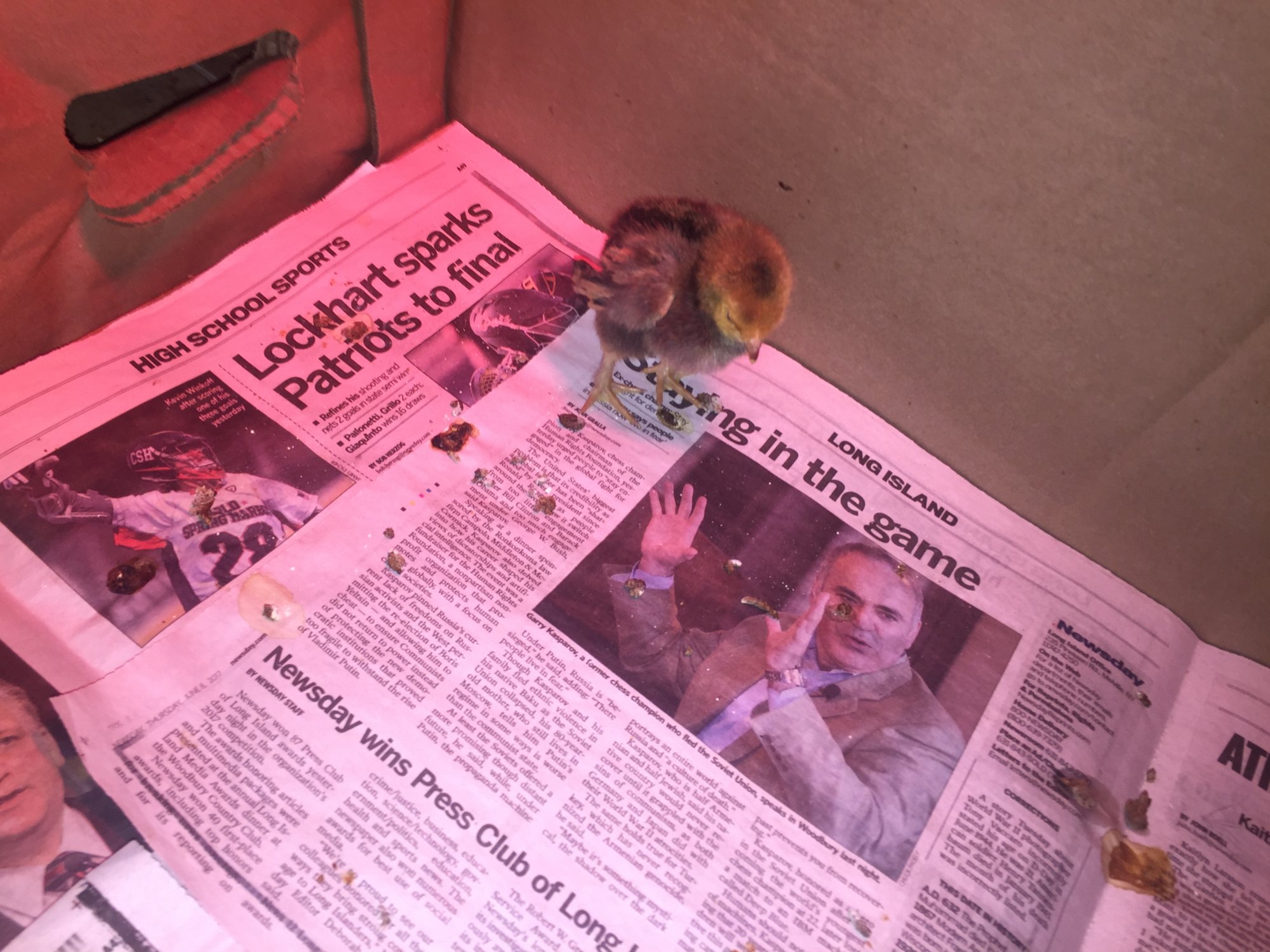 something "special" about this chick
2 3