Ridgerunner said:
As Jmns said, yes. To be a little more precise, each chick has a 50% chance of being Lavender. The others should all be black. It's a matter of odds. I'm trying to be careful how I phrase this. The pullet will have one Lavender gene and one not-Lavender gene. These will be passed down at random.

It's like flipping coins. If you flip a coin three times you might get three heads, three tails, or maybe a split. If you flip a coin 100 times you should get real close to a 50-50 split. Same thing with the chicks, the more you hatch the more likely you are to get an even split. With just a few chicks, who knows.
Click to expand...

Okay, I think I've got it now.

So if I mate the offspring of this hatch to the lavender roo, I'm likely to get about half blacks and half pure lavender color, not accounting for the leakage from the ISA Browns genetics.

And then, that will largely depend on how many eggs I hatch. The larger number I hatch, the more even the split. At lower numbers of chicks, It's kind of a crapshoot as to how many will be which thing.

Guys, I'm already getting so excited and I won't even be setting the first generation in the 'bator until a week from now! lol. And that doesn't even begin to mention what happens if I mix a rooster from this hatch back to an ISA Brown mom... a whole other rabbit hole to dive down, I'm sure! lol.

Also, as I understand it, leakage is mostly a bad thing that you should be culling out of breeding projects and purebreds... but I'm not gonna lie, I'm also excited to see how it presents itself as this hatch grows out into adults.

This is so cool!

Lover of Jesus, cows, and chickens

Thank you! He was the lucky winner out of the 3 lavender roos. He was the most beautiful and the sweetest! My kids call him Mr. Floop lol
L

Just updating for anyone who is interested in this cross. I know these guys won't win any breed standards awards, lol, but I find the genetics of this all so fascinating!

So, we set 12 eggs to hatch on Wednesday, October 28th. On day 5 candling, 11 were looking good, and 1 was looking like infertile. I was going to leave it in a couple more days just in case, but my youngest son dropped it on the floor. No baby in there, thank goodness!

Yesterday, November 18, 8 out of 10 eggs hatched. I had to assist the hatch of 1 chick who came this morning. A smaller chick than the rest, but doing pretty great this evening. I separated it from the rest to let it fluff up and sleep off its ordeal. It's back with the other hatchlings now.

The last egg never even pipped. It felt weird when I touched it. Not quite as heavy and warm as the others had been. I candled it twice, no movement, no internal pipping, no chirping. I did the float test, and it failed. Eggtopsy revealed a fully formed chick. The inside of the egg seemed a bit dry, the chick was malpositioned, but it had absorbed most of its yolk sack. I guess it was just too weak? I don't know what happened there. Poor thing.

Anyways, now to the part everyone cares about... What do they look like?

My calculator suggested a cross between a red hen and a lav rooster would yield all lavender split to black chicks. I hadn't accounted for the fact that my "red" hens were all ISA browns, so they are hybrids and not pure red.

I got 3 out of the 9 chicks which were as expected, lavender split to black (with some leakage as suggested by PP).

The 1 that hatched this morning and is smaller than the rest my kids have named mini marshmallow, because that chick is all a fluffy pale yellow, and will probably turn out pure white by my guess.

The other 5 are pale yellow with black dots. I'll be darned if they don't look exactly like Austra Whites! Which, when you think about it, makes sense. Austra Whites are a hybrid which is made by breeding a white leghorn to a black australorp. My rooster was basically just a diluted Black Orpington and my hens were all hybrid production birds, very likely with some form of white leghorn or similar breed in their background. The only difference is that every one of my "Austra Whites" has a copy of the lavender gene as well. Pretty neat!

I wish these little dalmatian looking birds would breed true because they are so cute!

Of course, I have pictures! This thread would be pointless without them! lol 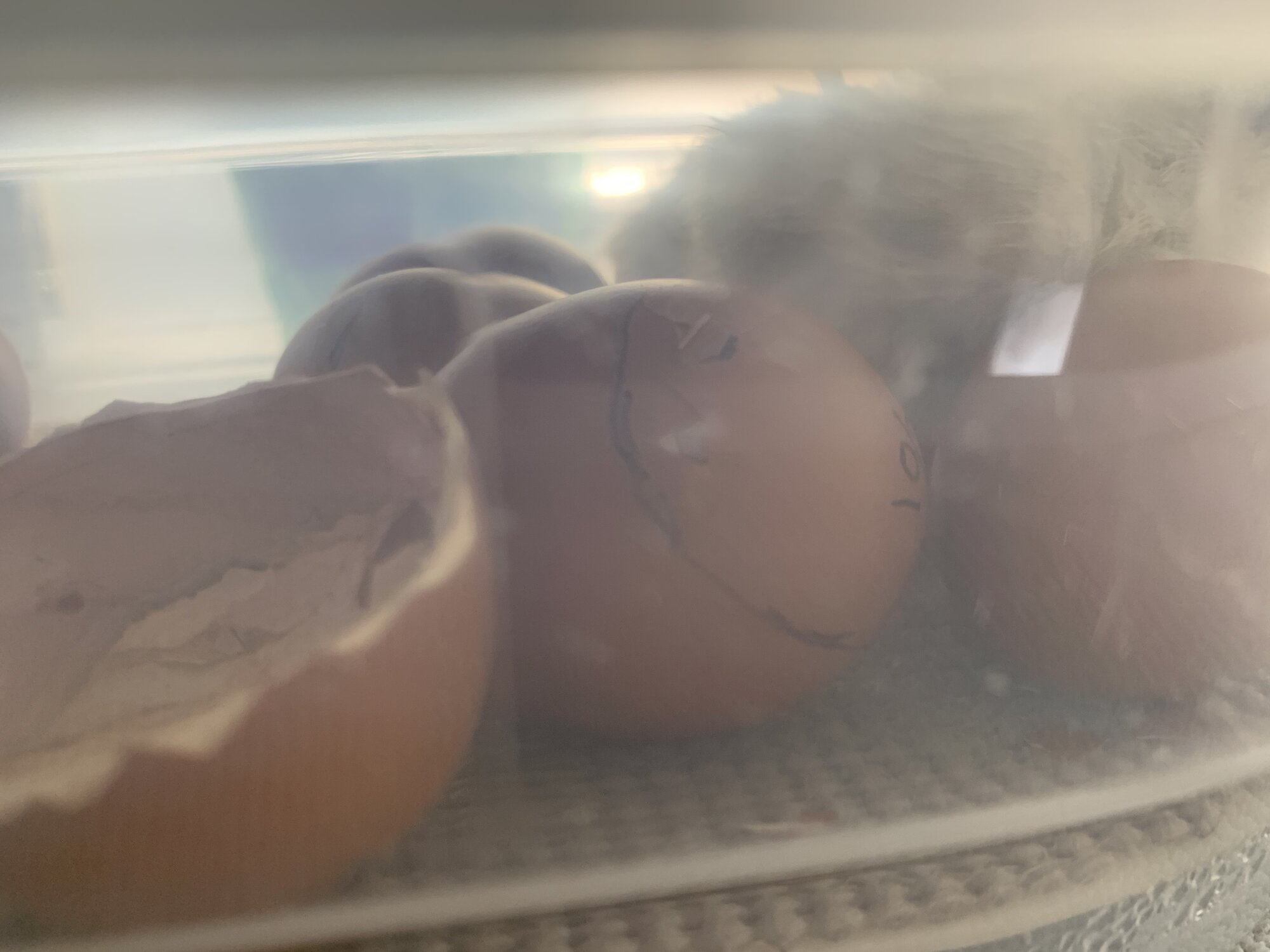 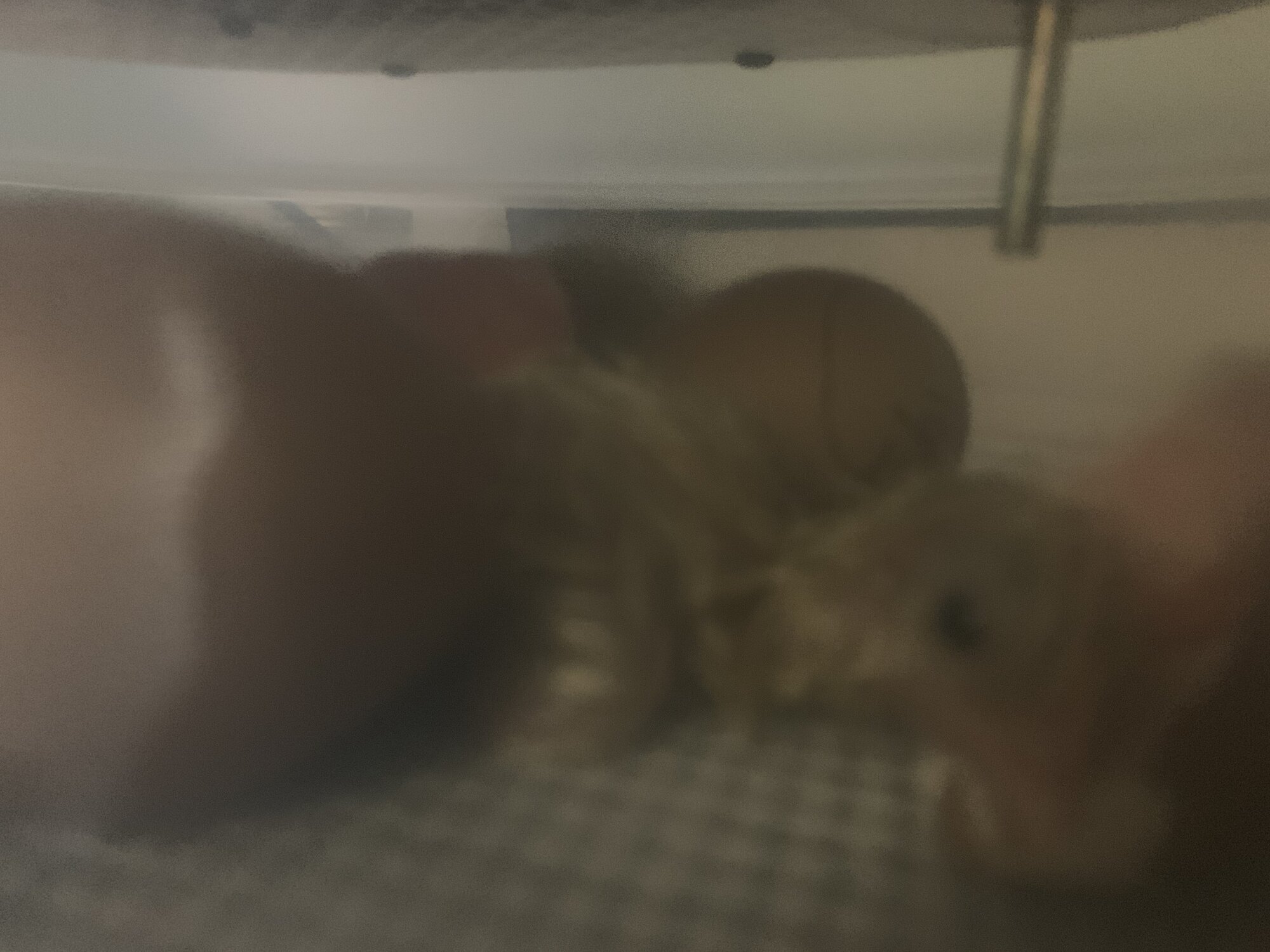 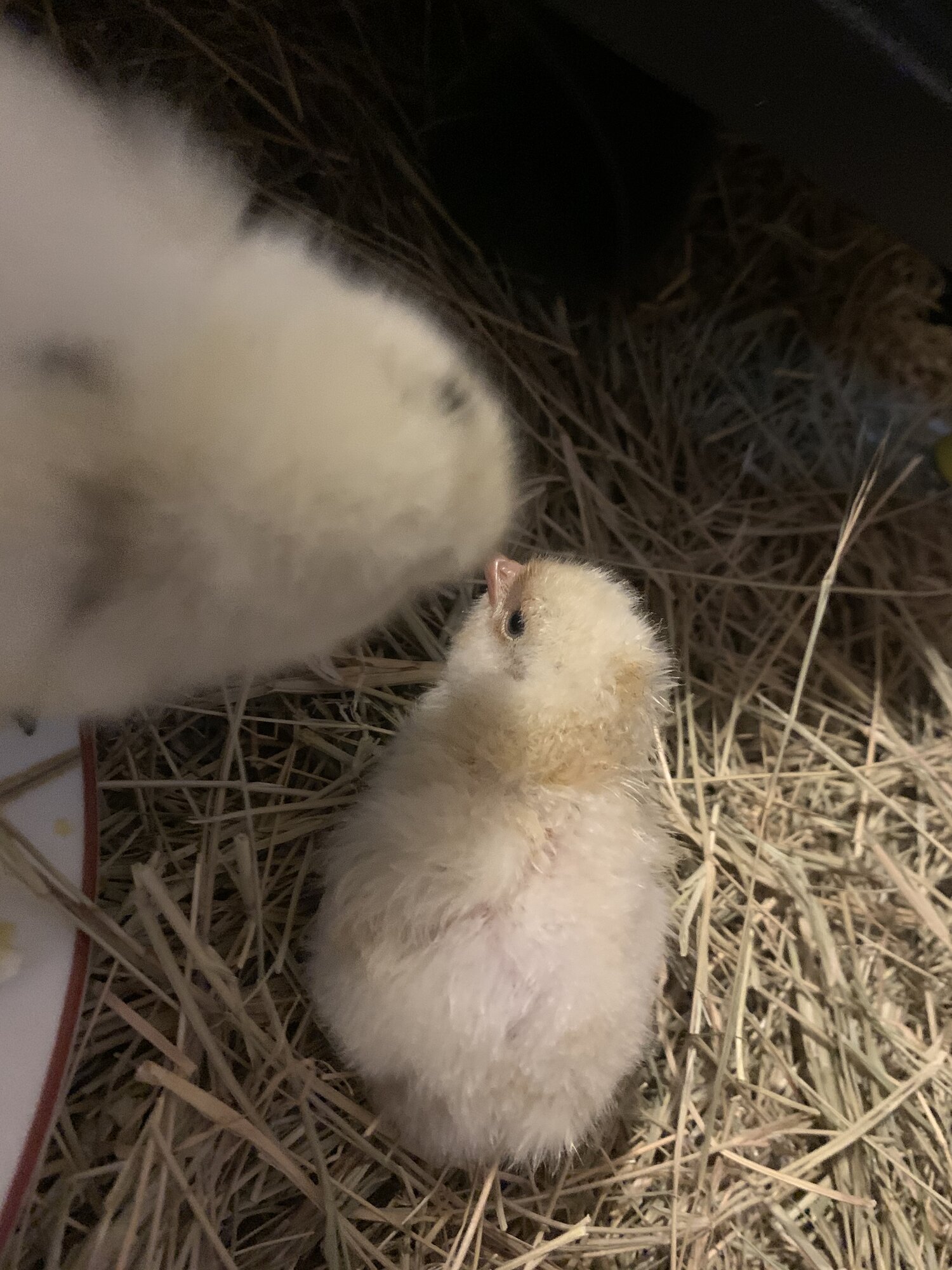 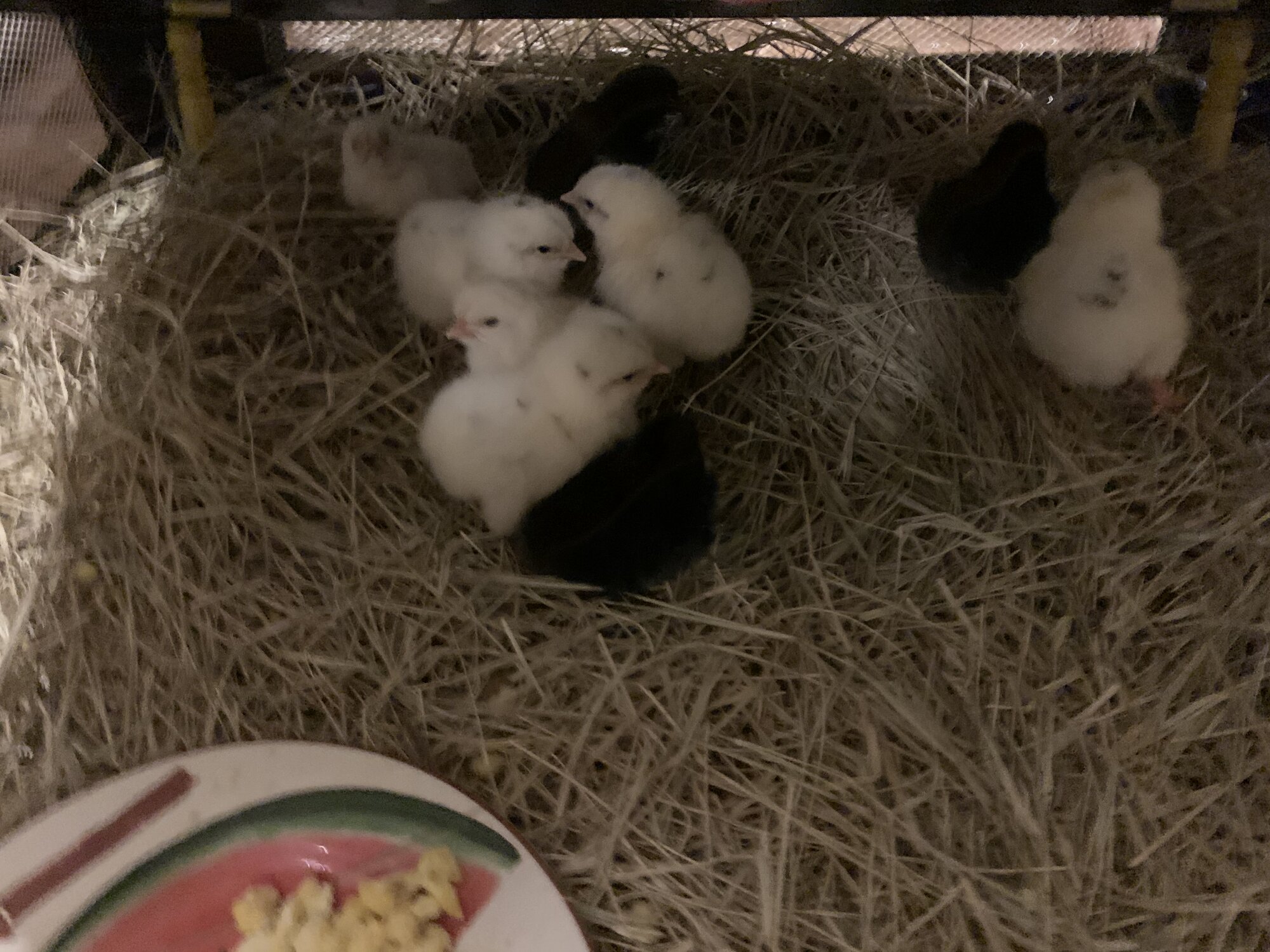 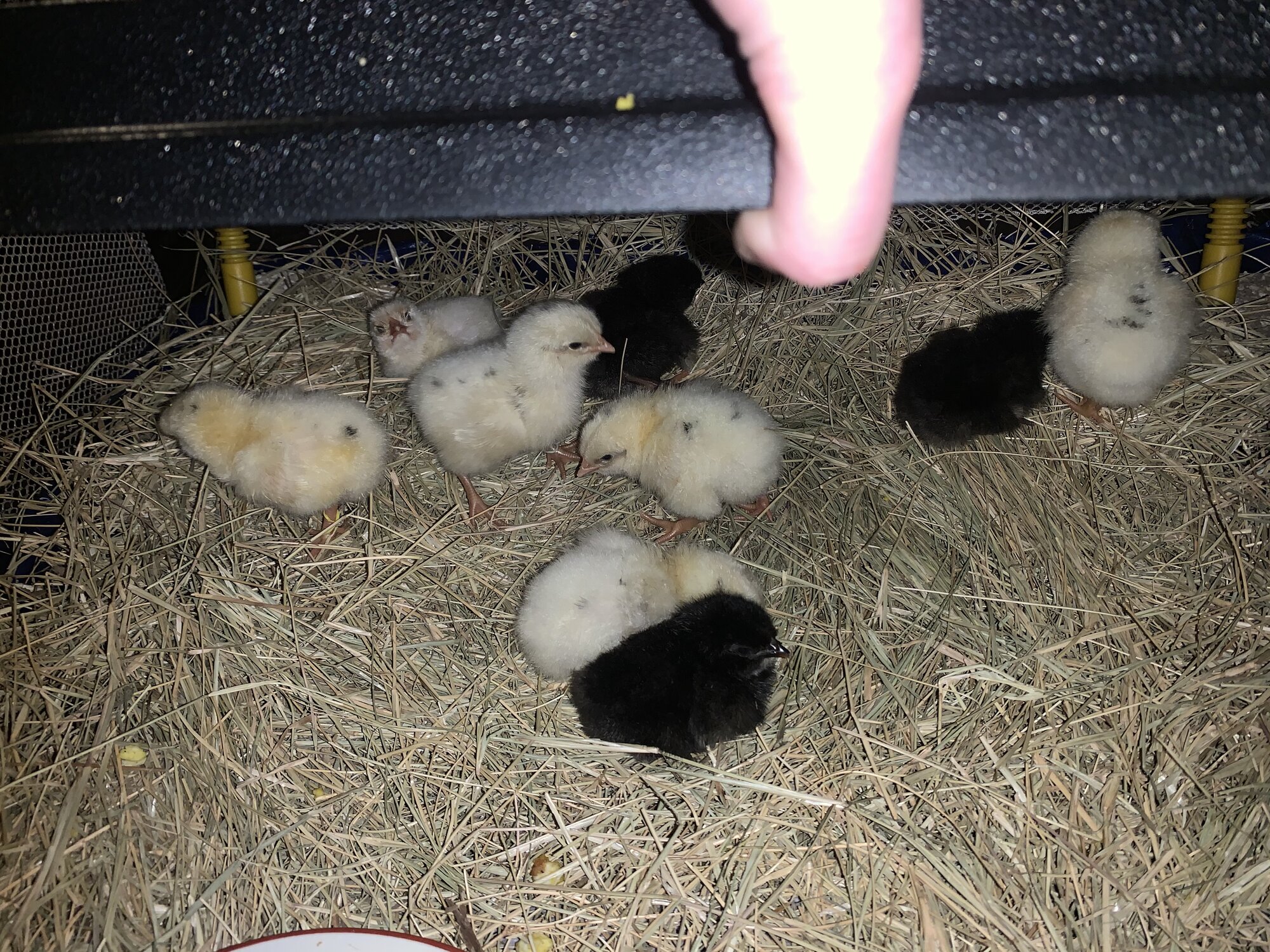 Ridgerunner said:
I have not done that hatch but i theory you will get solid black chickens. Lavender is a recessive gene so it will not have any effects on the chicks. Lavender modifies what would normally be a black feather to look that grey lavender color. So those roosters are based on black and will pass black down to their chicks. Black should be dominant to anything those hens have so in theory you get solid black chicks.

What I really expect though is that you will get black with leakage. That leakage could be red or white. That calculator does not handle leakage. It can't because leakage is so uncertain. What leakage means is some random feathers will be a different color than the base color.

This first shows some gold colored leakage on what is supposed to be a solid black cockerel.

In this photo those white cockerels are supposed to be solid white. You'll see different patterns as well as shades. It's possible you will not get any leakage but I think it is pretty probable. I sure can't predict what it might look like.