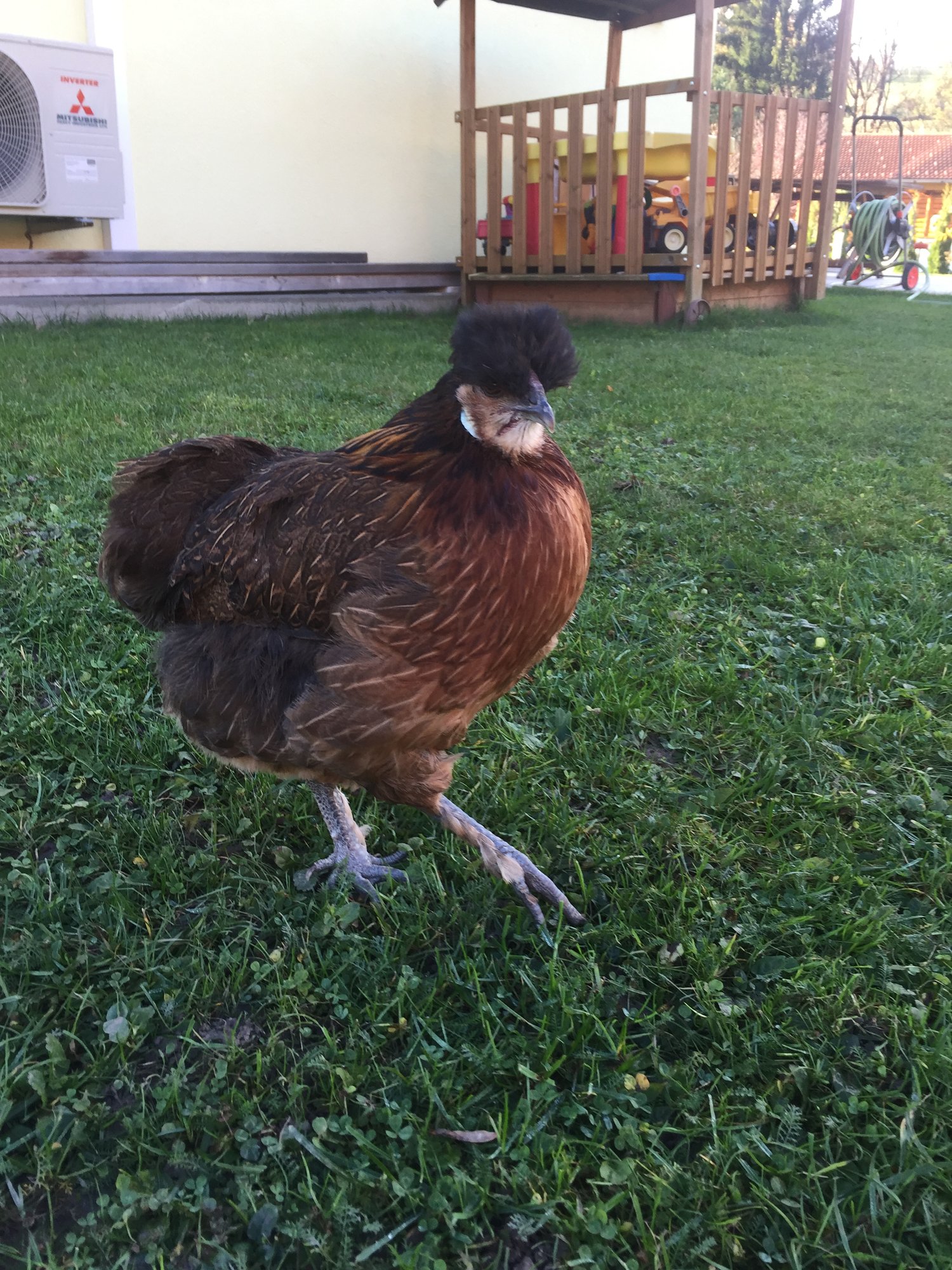 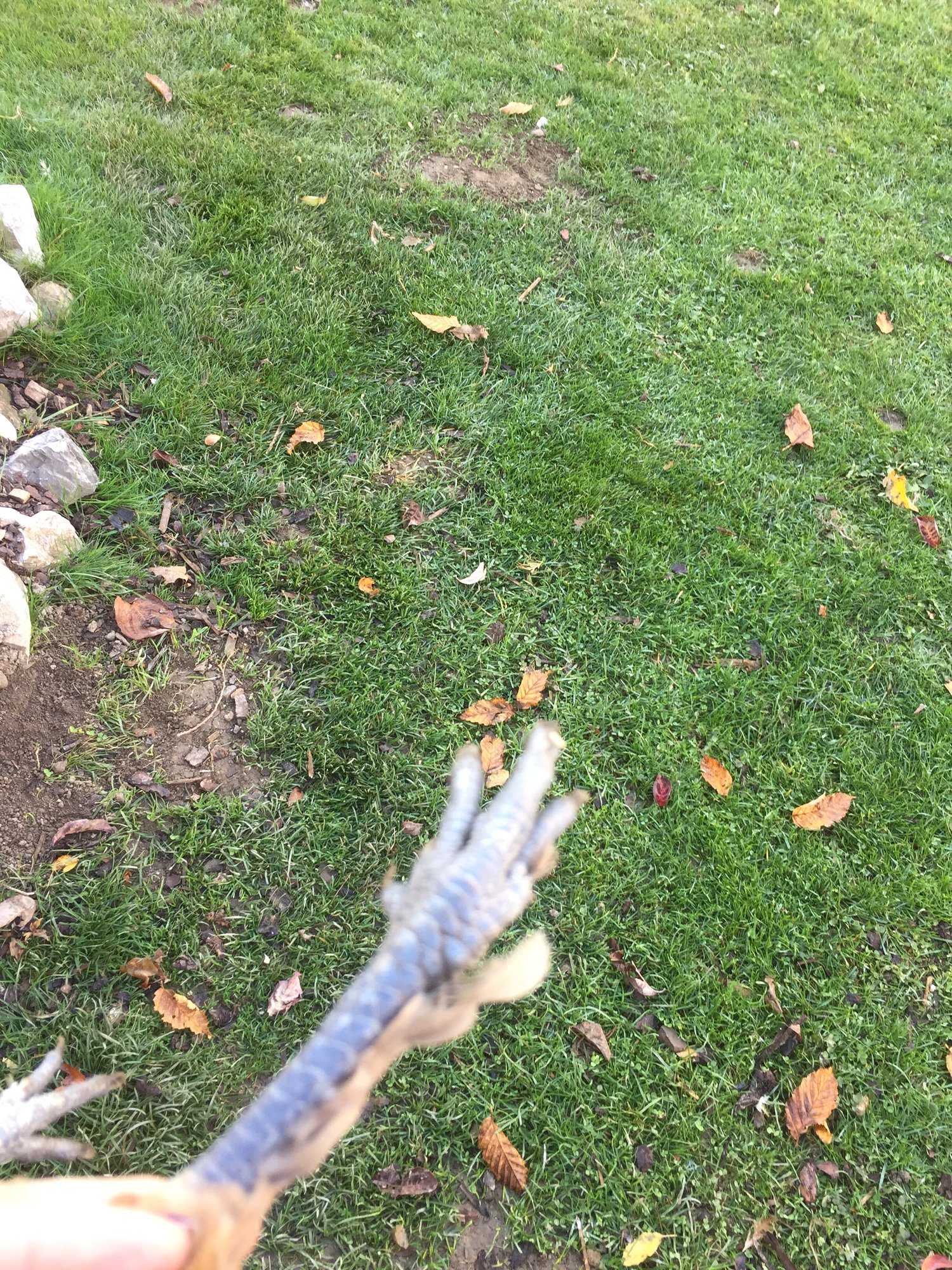 I have a 6 month old mix breed green layer/silkie I hatched from the egg. She injured her leg. My son was trying to catch the rooster in the coop when they were all getting ready for bed and I guess she was scared and injured it running away or jumping down. There is so sign of injury nothing sticking out it feels fine, foot looks fine so no bumble foot. She gets along great hopping she even hops in and out of the coop door which is about a 7” hop. She is eating and drinking no one is picking on her. I have not separated her because the flock is very docile and friendly. I made her a ramp so she can get in and out easy. When I touch her leg the I guess you would call it elbow area down is completely limp. Like no feeling at all. Her toes don’t curl on my finger when I put it as if she was roosting it just hangs there. Any idea what type of injury this could be or how to help her? I can send pics and videos if I can figure out how to do that on here.

From my personal experience I would say that it may well be Marek's Disease and not an injury and you have perhaps just associated her lameness with your son trying to capture the rooster from looking for a possible cause. Was her lameness noticed at the time or the next morning? Usually with an injury there will be heat or swelling or bruising or pain. If it is just numb then, taking into account her age I would say that Marek's is the most likely cause. I would offer her and the rest of the flock a vitamin supplement as that will support their immune system to help keep them healthy. I have had some birds impaired like this come right after a few days of hobbling or hopping and others, particularly smaller birds just learn to get by on one leg and pull the other one up out of the way.

Do you just have the one rooster and how old is he? Adolescent cockerels are a pain and best kept isolated from the pullets whilst their hormones rampage. They are one of the commonest triggers for outbreaks of Marek's in a young flock.

Marek's Disease can have a huge variety of symptoms and a similarly wide array of severity, from a bird being unable to keep one eyelid fully open all the time to floundering on their side with legs outstretched unable to get up. They can also exhibit changes in their eye colour or pupil shape or get skin lesions or suffer from internal tumours on their organs which can cause sudden death. It is a very common but complex disease to understand. It also compromises their immune system leaving them vulnerable to secondary infections, hence the vitamin supplement suggestion. It can lay dormant for long periods and an outbreak is usually triggered by stress, which may be the surge of hormones at point of lay or the unwanted attentions of an adolescent male or a predator attack or sometimes just being confined to the coop due to bad weather.

Hopefully if this is Marek's, that you have one of the milder strains or better still that I am wrong and it is just an injury. Only time will tell but offering some poultry vitamins like Poultry Cell for a few days will not do any harm. Good luck with her and if possible provide her or the rooster with separate accommodation because him trying to mate her will make matters worse regardless of the cause of her dead leg.

Hi and thanks so much for the reply. I noticed the lameness right after my son caught the rooster. She was fine all day then they were all in the coop my son wanted to hold the rooster and of course he was running around trying to not get caught and then I saw her limping. I’ll research the markes I don’t know much about it. I have 2 roosters. So far no one has tried to mate with her that I know of because she has not started laying yet. And they seem to since that and leave her alone. The main rooster is a few years old the second was hatched with her so 6 months old. He is maturing but so far doesn’t try to mate because the main rooster keeps him in check. They are getting vitamins I started those yesterday. The injury or what ever it is started 2 days ago.

If you research Marek's you will read a lot of scary stuff. In my opinion that is because the majority of cases that are diagnosed are the severest strains where it has killed multiple birds and hence has triggered people to get a necropsy, but there are many flocks with milder strains that are never diagnosed. They get a lame bird here and there or a bird with wry neck. Some recover with vitamin therapy, some don't and some deteriorate and die but never get necropsied. Everyone believes it can't be Marek's because the severe strains they have read about kills lots of birds, but it is an extremely common and widespread disease which is very easily contracted and due to the dormant periods and variety of symptoms it is very hard to correlate one symptomatic bird to another. It is a Herpes virus and similar to the Cold Sore Herpes virus in humans a large percentage of the population have it but only a few show symptoms at any one time and they are only infectious whilst they are symptomatic. There is a minimum 3 week incubation period between infection and becoming symptomatic but it can be considerably longer, so birds don't all become symptomatic at the same time, just here and there.

Your young male is reaching an age when his hormones will be raging and he will take whatever opportunities to mate that he can, whenever the main rooster's back is turned and he will try to mate with any pullet or hen he can get hold of. This girl will almost certainly become a target for him because of her reduced mobility, regardless of whether she has started laying or not. Sexual frustration will drive him to it sooner or later in my experience and opinion. In fact he may already have started but you just haven't witnessed it yet.

Thanks so much for the useful info. So is there anything else I can do if it is Mareks besides the added vitamins? And if I separate the young rooster should he be completely alone and won’t it be a problem integrating him back in the flock later. His father is the main rooster and so far they get along great. He is a silkie(father) and bantam Cochin (mom) mix. Both roosters are very nice

Sadly there is no recognised treatment for Marek's and some people cull as soon as they suspect a bird is showing symptoms... they are actively shedding the virus whilst symptomatic, so it makes sense to do so, but personally I can't bring myself to do it unless they have lost interest in food and it is a steady decline after that, so I know there is no hope. Keeping the flock as stress free and healthy as possible is important to managing it and that can involve making some difficult decisions. I remove surplus cockerels to a grow out pen before they hit adolescence, but with you having just one that is much harder and with not having a confirmed diagnosis of Marek's I can see how you would not want to take that route, especially when he is a silkie bantam cochin cross, as he is, no doubt, cute as a button. I have bantam cochin roosters, so I know how endearing they can be. I think in the circumstances you will probably just have to play it by ear and be vigilant and maybe have a time out cage ready for when/if he gets a bit over enthusiastic. Mornings and early evenings are the usual time for hormones to surge. If it is Marek's, penning him separately may well trigger an outbreak in him and if he is a family pet, that could be just as distressing as losing a pullet... if the worst comes to the worst.
Hopefully I am wrong and you have no further incidents of this kind. Will you keep this post updated with her progress please as it can be helpful to others in the future too see how these things end up.

for a happy ending.

Yes all my chickens are family pets, eggs are just an added bonus. My limping hen really enjoys being petted. She just stands there as we pet her. I had a few hens go broody this spring so decided to hatch some eggs. Only 2 hatched, my limping hen and the rooster. So they actually are always together they are very bonded. The rooster just started crowing. We are very close to these 2 since we hatched them and this was the first time we ever hatched eggs. I do have a large dog crate I used for the mom and eggs when we were hatching I could put him in temporarily. But for now I’d like to wait they all get along so great. I will update this post as how she is doing. I myself have read many old threads when I have a problem so I know it’s helpful.

crissy1079 said:
When I touch her leg the I guess you would call it elbow area down is completely limp. Like no feeling at all. Her toes don’t curl on my finger when I put it as if she was roosting it just hangs there.
Click to expand...

crissy1079 said:
I noticed the lameness right after my son caught the rooster.
Click to expand...

Can you post a clear picture of the back of her leg joints? 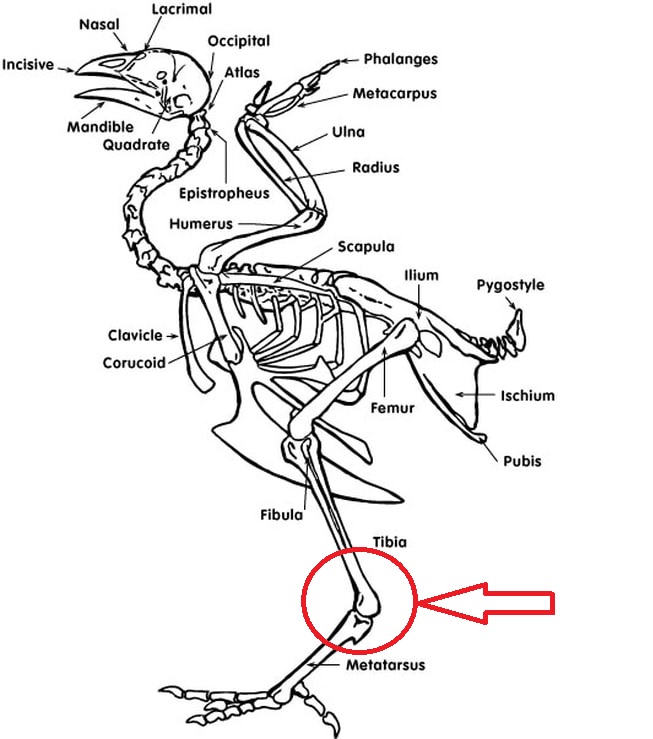 Thanks for then pic that’s the exact area I’m thinking is injured. From there down is limp. She is getting around fine it’s getting dark here and I just found her on the top roosting pole. I tried taking some pictures but she has feathers on those parts of her legs. Tomorrow I get someone to hold her and try to get a better pic.

Does anything feel out of place compared to the other leg? Especially the tendon around the joint? (back of the leg)

Quail died from infected???? wing injury. How to treat the injury properly in the future?