I want to have a discussion about wry neck/crookneck.

What have you done?

What's worked, what hasn't? Did you have to put any chicks down? Did they eventually come out of it?

I've read the boards, read the links, etc. I'm on my 3rd chick out of 18 with this problem. The first one went away same day on it's own.

Second one got progressively worse over 2 weeks until it couldn't eat or drink without our aid and we put it down. (Last week.) We gave him vitamin supplements, to no avail.

We have a little roo that has suddenly developed this over the last 3 days. I've been giving him about 1/2 a dropperful of Polyvisol twice a day and E vitamins twice a day. Not getting worse, not getting better.

Prednisone: The one we put down last week we took to the vet and asked about getting prednisone. The vet (who is a bird vet) said that she didn't like to give prednisone because it wipes out the immune system and is too strong for them.

Hereditary? The vet did say that it could be a hereditary issue. We had 2 hens, 1 roo and ended up with 18 babies--3 that got it so far (we've sold all but the final 6). Possibly, hereditary?

I've heard some chickens do fine with crook necks but I'm not sure about Hereditary. Hope someone can help you. Good luck with the lil roo hope he gets better

Sorry about your chicks. It can take some time before they/ if they recover from it. Lookout took a long time, and it was hard for her to eat on her own or drink, so I had to hand feed her scrambled eggs, baby formula and dip her beak in the water. Her's was twisted really bad. The day I told hubby I'd have to put her down I went into my office where I kept her with a heavy heart. Low and behold as I peeked in I saw her with her neck almost straight eating on her own. As soon as she saw me she started spinning circles and twisted her neck a little but once she stopped getting excited she straighted up. It took a while longer before she improved more but now she is almost normal almost a year later. She still will tilt her head from time to time and spinning circles when excited, but just looking at her you can't tell. I also found it to be hereditary, as 2 others were affected. One was too bad and never recover, the other got better only later to develop it again. Lookout is fine though, so it can be done, it just takes a long time and a lot of dedication and they have to have a will to live. I also made little foam neck braces out of foam and vet wrap, I only used it on her not the others and she survived, it may or may not help. It has to be very light or they will get stressed by it and I did not leave it on all the time. I did it at night, when they are more relaxed and sleepy.

We too were thinking about some sort of brace. And the vet even mentioned one as well.

What did you make yours out of?

This is my Tessie. 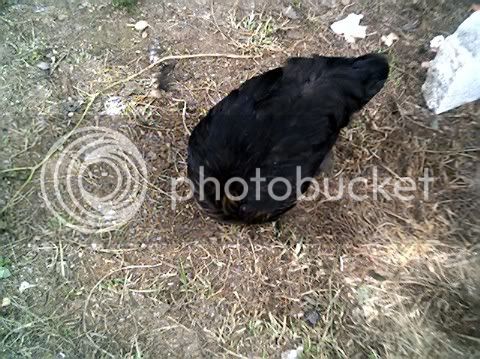 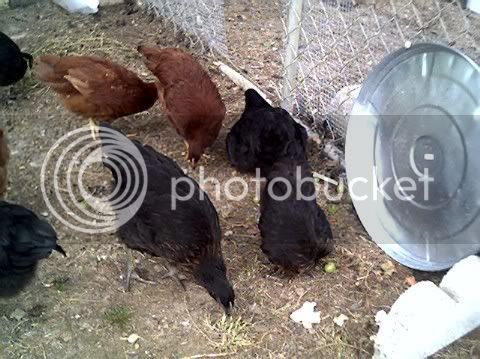 She got her crooked neck because the bedding was too deep and the other chicks stepped on her when she wiggled down in to it. She was one of the lucky ones, 2 others died doing the same thing.

Tessie got along great. She had a great will to live and wouldn't take anything from anyone. She could run faster backwards than frontwards and would push the others out of the way to get to the treats. She was known for laying double yolkers every few days.

I lost her last Decemeber when a neighbor decided that he didn't have time to take care of his dog and puppies during his marital problems. His dog decided to eat 3 of my chickens. Tessie being the first. I still miss her.

I was REALLY hoping more people would have input.

Quote:
You can talk to "Ruth" she is the one who helped me.

Certain breeds is it more common due to a peck on the head (ex: silkie and polish) due to a vaulted skull.

In most cases I think it is caused by nutritional factors. Vitamin supplements would resolve this over a period of time.

Here is some of my collected info on neurological symptoms of crookneck/limberneck:
http://dlhunicorn.conforums.com/index.cgi?board=emergencies&action=display&num=1160928615

re vit. supplementation:
Please note that vitamin E (at therapeutic dosage) is absorbed only in combination with selenium (the two are interdependent on each other)... if there is a malabsorption issue in general this will also affect absorption and therefore it is a good idea to give a general supplement like Avia Charge 2000 ...
Vit A (in excess ) will negatively affect uptake of vit E so you should not use the Polyvisol in combination with the vitamin E/selenium as a general rule.