This is my first year with chickens, and I'm wondering what you all do when the days start getting shorter? Do you put a light in the coop or just let them go? I was reading the article in the sticky and was wondering what most people do as far as lighting and heat? I'm in NE Ohio, if that helps at all. Thanks in advance!

I am considerably farther north of you in northern MI. A solid coop, good hardy breeds and you'll be just fine. Little, bantam breeds are more fragile, I suspect.

If you do not add a few hours of light, yes, you laying rate will drop considerably, but most breeds will continue to lay some.
I have a light, on a timer, that comes on at 5 am year around. I do not provide any additional lighting in the evenings. Thus, I split the difference between "pushing" them with a full 14 hours of light, which some choose to do, and providing zero additional lighting which usually means a fairly drastic drop off in laying in Dec and January.

It is really your choice and your management decision to make.

I have a small wattage lite that I use in the winter.It's about a 15 watter.I have it on a timmer and it did great.I don't use heat.I do live in Va. and it gets fairly cold but nothing that I worry about.

I don't add any additional light, but let them do as they will. I feel that they need to recharge their system after a season of laying. The ragged appearance if they don't molt doesn't bother me, though I'll admit they look a lot sleeker and brighter after a good molt. If they go too long without molting, their egg shells can get a little lighter colored and their laying a little errratic in quality and quantity. Besides, after their first adult molt, the eggs get bigger.

One of the main reasons I don't though is that I am not selling my eggs for profit. I raise them for meat more than the eggs. The eggs are used but I am not under pressure to produce them year round.

I find that the pullets that just started laying this summer or fall usually skip the molt the first winter anyway and just keep laying. Some molt but most of mine skip the molt the first year. Their egg production does not drop off that much. But the hens that are a year old or more will go through the molt and practically quit laying for a few months. So as long as I have a few pullets in the mix, I'll get some eggs all winter.

I do not add any heat for them. My coop is a fairly large walk-in coop with great ventilation up over their heads. The roosts are about 4 feet off the ground and the ventilation is about 8 feet high. They do not get drafts on them. My lowest outside temperature last year was somewhere around 4 below zero Fahrenheit. I kept 7 chickens in an 8' x 12' coop last winter, and let them free range most days. As long as they are protected from drafts and you have good ventilation, I would not think you would need any supplemental heat.

It depends on how much you depend on eggs-I live in Maryland and last year as soon as daylight decreased my production dropped steeply. I used a light set at, I cannot remember, but it was the recomended amount of hours to maintain production. Maybe 13 hours? Used a timer. Not concerned about the toll on the hens-they get time off in the summer when they go broody. My chickens are the only things making money so I use lights.

I think it's probably a fairly even split as far as people who provide extra light for better egg production in the winter and those who don't. My husband and I are divided on this issue, he wants to put a light on them and I would rather let them take the break their bodies would get "in nature" during the shorter winter days. Since the chickens are my hobby, I win. We have a small backyard flock just for some eggs for our family (and a few extras to sell to friends and co-workers to help cover the cost of feed) so I'm not too terribly concerned with egg production. If we were more into selling eggs, and therefor more concerned with keeping egg production up, then I would probably be in the providing supplemental lighting camp. How much of a winter break is natural for chickens is debatable...since the ancestors of our domestic chickens come from tropical climates closer to the equator that don't have quite such a dramatic shortening of days in the winter. But at the same time, domestic chickens have been raised for centuries in climates where there is a big difference in the length of day in summer and winter and I personally find it hard to believe that some degree of evolution hasn't occured in that time. Barred Rocks are not wild jungle fowl and haven't been for a long long time.

As for heat, I think you'll be surprised at how cold hardy most chickens are. With the exception of some of the smaller bantams, most breeds do very well in the cold. I remember one day last winter I thought it was "too cold" for my girls, so I had planned to leave them cooped up until later in the morning when it would be a little warmer outside. Well, when I went out to give them fresh not solid water I realized that I had forgotten to close up the coop the night before. Every last pullet was out in the run. After that, I was far less worried about them being "too cold." As long as they have a draft-free place to get out of the direct wind, they should be fine. There are people here from Alaska that don't provide supplemental heat, so NE OH should be perfectly ok for most breeds. On the other hand, there are stories on BYC every winter about coop fires started by heat lamps. For me, it isn't worth the risk when the chickens do just fine and dandy without it.

oh and I just used a regular light bulb-cannot remember the wattage....

Artificial lighting is for egg production enhancement, not for survival.

Heat is will depend on how cold it gets in your locale and how well they are protected from the elements. Mine are fine down to the teens.

Did you think about water? That is critical.

Not to hijack the thread, but I have a related question I've been meaning to ask but keep forgetting about. I still haven't decided on this issue of supplemental lighting. I like the idea of the chickens getting a "break," but does it REALLY benefit them long term? I guess the only way anyone could tell me this for sure was if they had raised some chickens with light and some without.... But if anyone happens to know, does it extend their lives/productivity or some other health benefit? I plan on culling hens when their production drops drastically, so would this benefit me at all?

Also, and I know this will be hard to answer, but for those who don't use lights how much does your egg production drop? My whole intention behind buying chickens was to not have to buy eggs anymore, even in winter. So I have 20 hens, with the hope that they will lay enough for us even when production is low, and that we can sell/give away the extras at peak. We use a ridiculous number of eggs each week- at least 2 dozen. Do you think I would get 18(a minimum I would be able to deal with...)-24 eggs a week from 20 hens without supplemental light? I have 4 barred rocks, 6 EE's, 6 red stars (who aren't laying yet, but should start sometime this fall), three bantams (although one might be a rooster... still not sure...), and one lemon orphington.

I like to add a little extra light of the morning(maybe an hour and a half in the winter) but my egg production is an important part of raising these hens. 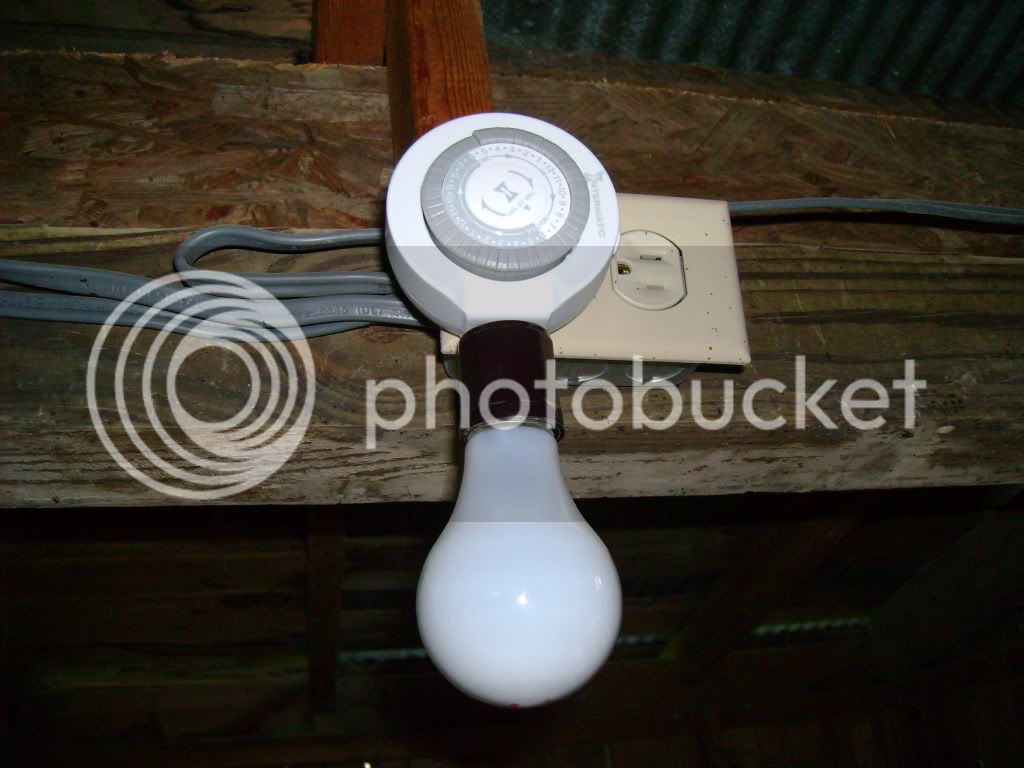