One of my new babies (hatched 05/24) began limping a few days ago. I've tried a few different things I've found on the forums, but have had no luck as of yet. Any help/advice will be greatly appreciated!

The Details
I can't find any evidence of a slipped tendon, though I'm not confident I'd know what to look for. I've been feeding her the rickets diet for three days now and have seen no improvement. In addition to the rickets diet, she has fresh water with poly-vi-sol (no iron) and eats organic chick starter from Coyote Creek Feed. I haven't been successful in giving her poly-vi-sol drops directly as she's particularly resistant and so delicate I don't want to hurt her. I also haven't been able to isolate her since she's with only one other chick (who's doing well) and I'm not sure how I could separate them while allowing them both access to the ecoglow warmer.

She's quite active and gets around the brooder pretty well and with amazing speed given her limp. When she stands, her right foot touches the ground but she puts very little weight on it. She happily chirps and plays keep away when her buddy tries to snatch her food. In case it matters, she's a blue laced red wyandotte and about half the size of her buddy hatched at the same time.

Pictures/Video
Here are some pics of her legs as well as a video showing her limping. 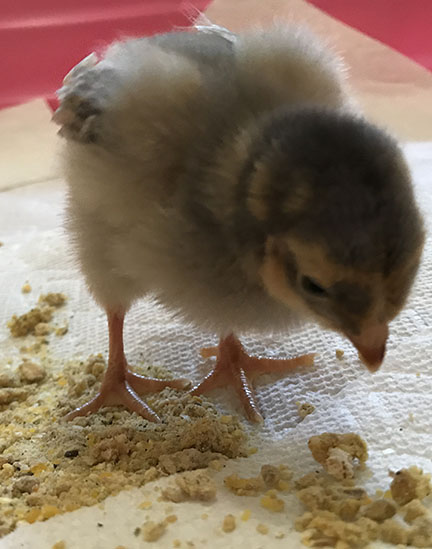 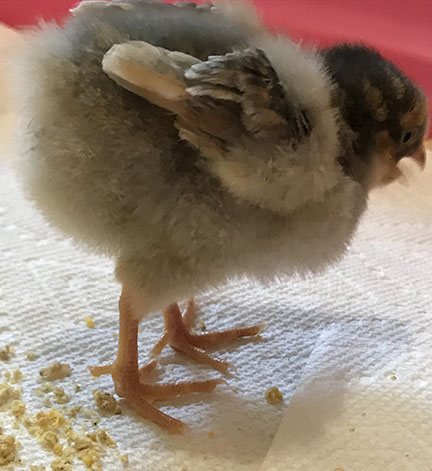 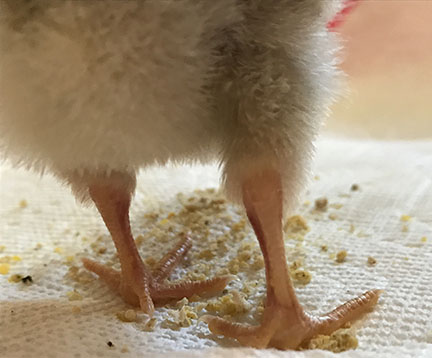 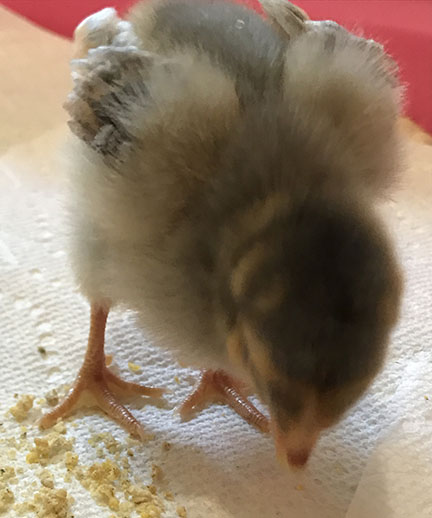 It could have injured it. If it did it should improve over the next week or so. It seems frisky otherwise so I wouldn't really suspect a deficiency. Check the date on your feed to make sure it isn't too old.

Thanks. I'd love to hear any other opinions and whether or not I should try to brace the leg or use a chick chair. The other chick in with her keeps jumping up and landing on the poor baby. After five days of limping, I haven't seen much improvement.

Yesterday I decided to go get two more chicks, one small to house with this little girl (Bloux), and one larger to house with her sister (Clementine). Clementine was just being so rough with little Bloux that I felt I needed to separate them.

Lo and behold! As soon as I put the four of them together so I could prepare their new homes, they all starting getting along fabulously. It seems having the additional chicks has pulled Clementine's attention off of Bloux. I have yet to see her dive-bomb Bloux since the new chicks were added.

Bloux is still limping, but I have more hope that she'll recover without the constant, and sometimes rough, treatment from Clementine. Here's a pic of the two of them just chillin' on my shoulder yesterday. Such good little explorers! 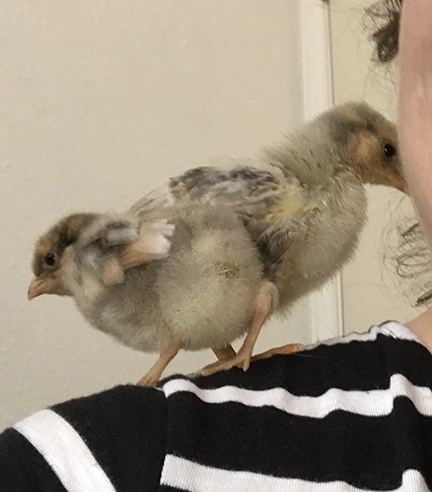 Final Update
After adding the additional two chicks, I decided to stop feeding the Rickets Diet. It smelled horrible and didn't seem to be helping much, if at all.

I have since been feeding Bloux plain scrambled egg each night and letting her sleep in my hand while the other babies got to eat their fair share of scrambled egg far away from her. It only took two days with the new chicks and scrambled egg for Bloux to begin showing improvement. Her limp is almost completely gone! Added bonus...the new chicks are extremely excited to see me now that they think they're going to get treats. Baby Flora runs over and starts cheeping loudly, Clementine jumps out of the pool and right into my lap, and little Bloux tries to follow suit. Once her leg is completely healed and she's a bit bigger, I expect she'll be the first one in my lap. Now to work on getting Penny socialized.

Thanks to Oldhenlikesdogs for suggesting it was a simple injury! I would have continued to be a stressed out mess without your help. =)

S
Chick Identification and Question about a Buff Brahma