Hey there, I would really appreciate some input on this! I have a 12 week old Black Ameraucana cockerel, bought (as a chick) from a local breeder, who's never had any issues before this weekend. (Named Godzilla, since he's been so hefty and active lol)

His symptoms right now are:

1) Limping/hesitance to use his right leg - started barely noticeable, increased over two days. Initially assumed it was a simple injury, since he was "playful" with our two other roosters.

2) Swollen eye - appeared overnight the following day. Again, assumed it might be an injury; I'd seen an accident involving another bird, where a small branch had wobbled up and hit him/startled him.

3) Possible symptoms... body check last night, his crop felt squishier than the others. He was also panting and dribbled water after drinking, but it was mid-90s F/30s C and humid.

We've repeatedly checked his feet and legs from any injuries or sign of bumblefoot. Nothing there. His leg isn't completely lame, still has control of his toes. Examined his eye and found no discharge or foreign object. Cleaned it with a saline solution, administered Terramycin multiple times. No change so far.

Coop and run has been cleaned on the regular. Roughly a month ago, we lost another young rooster to what was possibly coccidiosis. In fact, upon another pullet showing weakness/diarrhea, we immediately began standard treatment with liquid Corid the day before this boy's symptoms started showing. (Edit: pullet is like 75% back to normal)

Any idea what this could be, if it's related or not? We're read up on issues like coryza, mycroplasma infections, crop issues, Marek's, etc., but remain at a loss. We have amoxicillin on hand and have seen multiple mentions of using tylosin/Tylan for treatment, which hopefully is accessible nearby. I'll post pics asap, just worried and wanted to get this posted.
Last edited: Sep 9, 2019

After checking my camera roll, I'd somehow missed it 4 days ago - September 5. 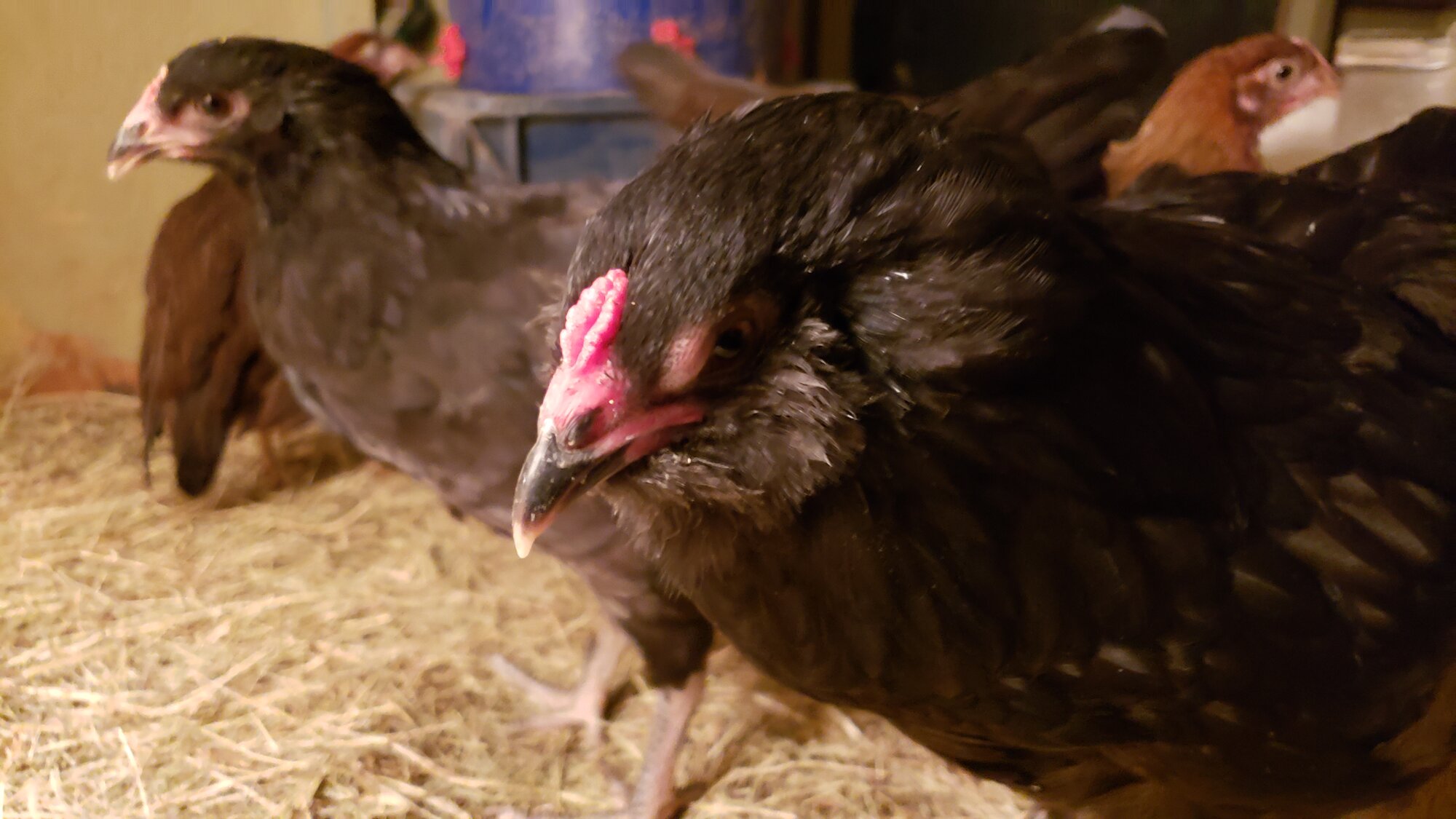 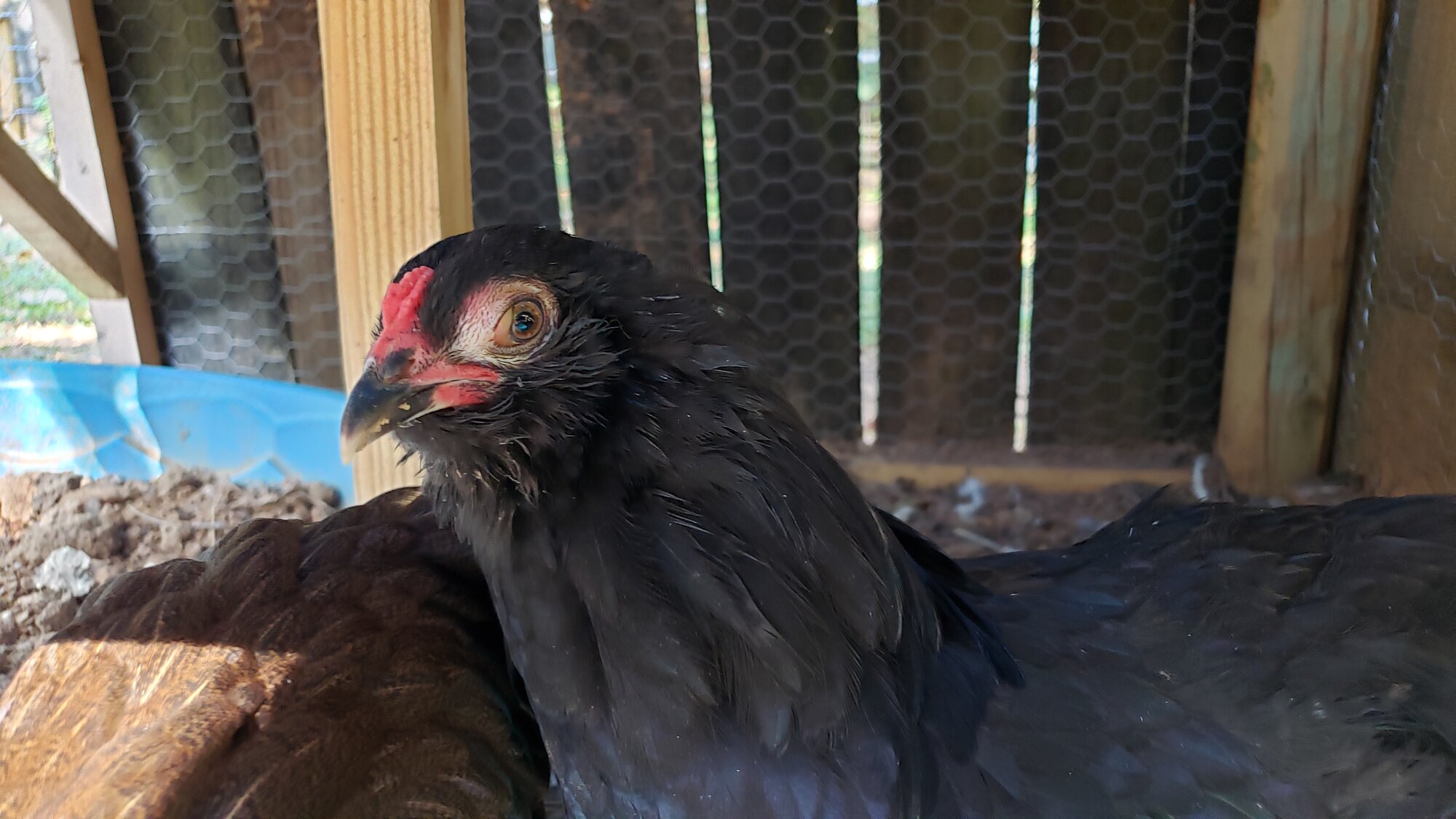 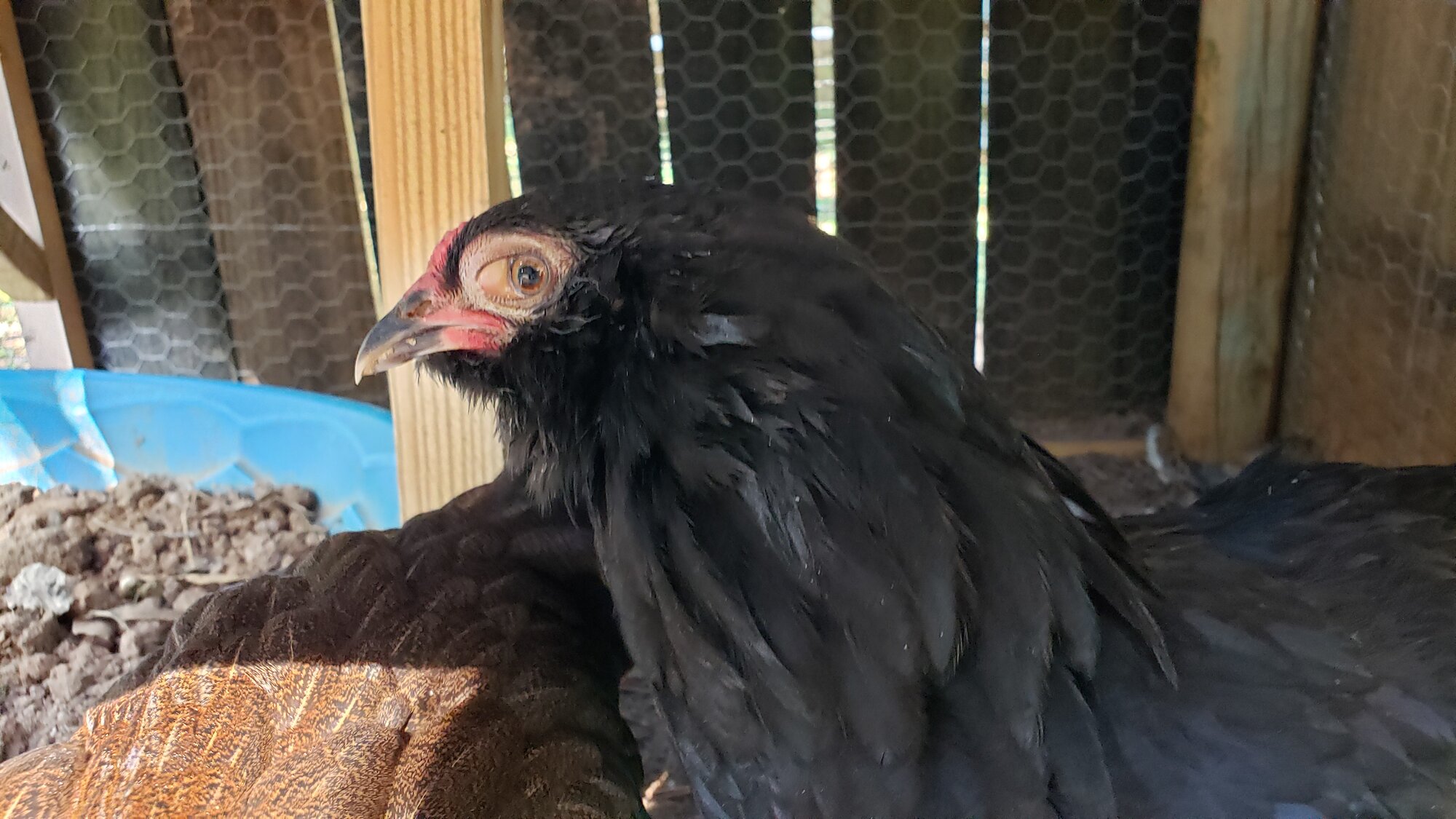 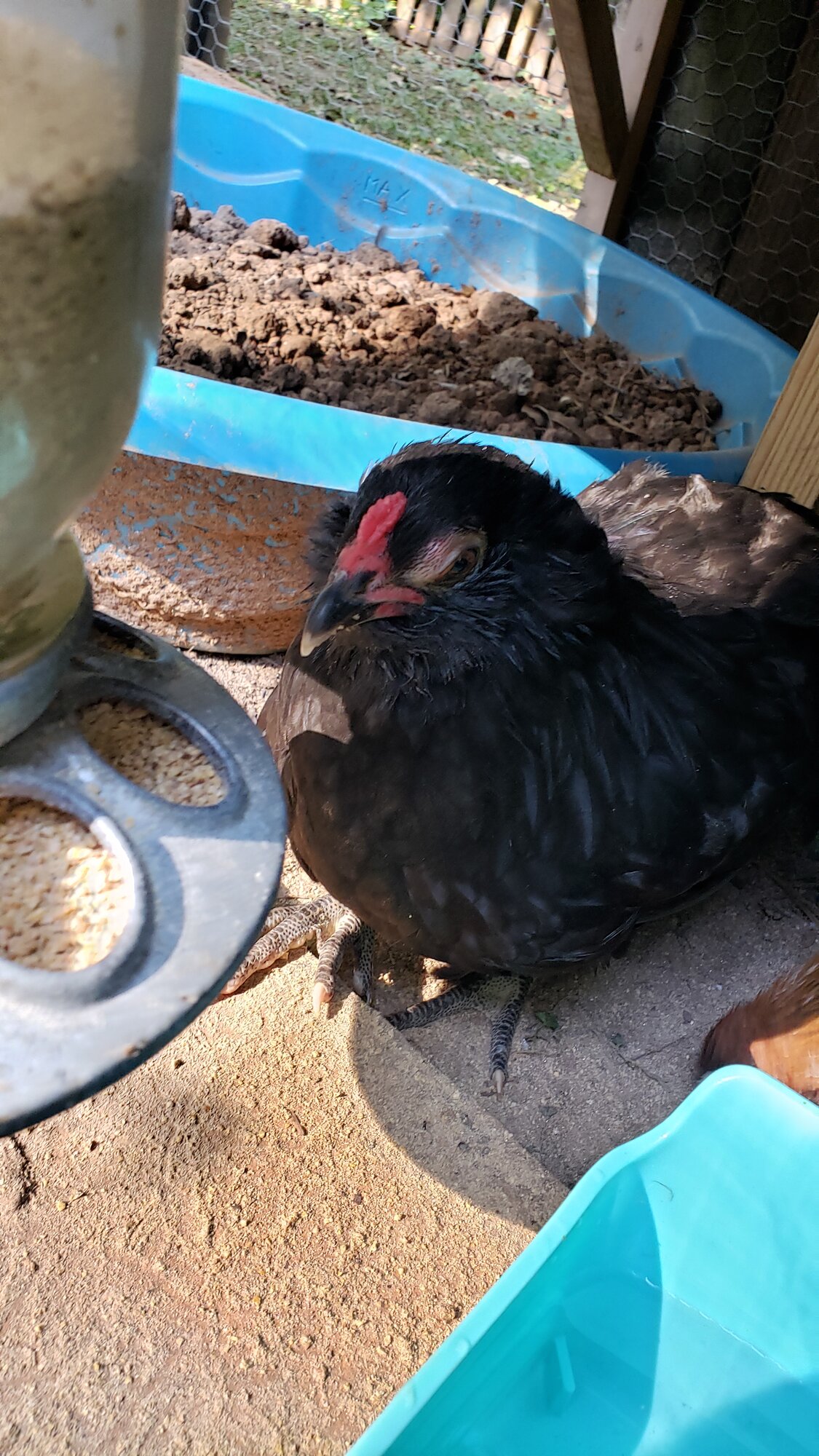 He's still eating & drinking normally, but is keeping to a covered area. (Usually drinks from nipples but added a little bucket of unmedicated water, maybe easier to drink from.)

It's possible this cockerel is carrying MG or another respiratory illness in his cells and the stress of moving to a new environment has triggered his symptoms. Tylan 50 should be available at most feed stores or get it here. https://www.revivalanimal.com/product/tylan?sku=22485-639

Looks like his nostril is clogged and he has pus in the eye. Can you look inside his beak for any more mucous, lesions, white or yellow patches?
I would flush the eye with saline, press on that beige looking area and see if you can get anything out of there. Even with ointment and antibiotics, if that is pus it will not dry up on it's own - chicken pus has to be physically removed. 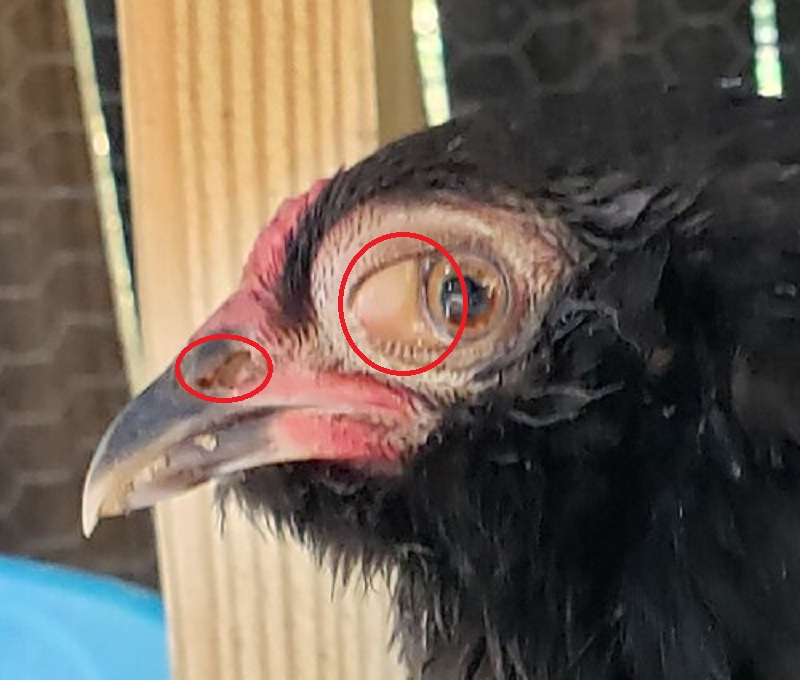 Thank you both for the responses!

azygous said:
It's possible this cockerel is carrying MG or another respiratory illness in his cells and the stress of moving to a new environment has triggered his symptoms. Tylan 50 should be available at most feed stores or get it here. https://www.revivalanimal.com/product/tylan?sku=22485-639
Click to expand...

My post wasn't totally clear, I bought him as a week old chick. But, if stress is a factor in MG & other respiratory issues, a hawk attacked about 2 weeks ago (first time ever) and unfortunately killed a pullet from his "brood". Maybe a trigger?

Thanks for the link, I'll get the Tylan 50 asap.

Wyorp Rock said:
Looks like his nostril is clogged and he has pus in the eye. Can you look inside his beak for any more mucous, lesions, white or yellow patches?
I would flush the eye with saline, press on that beige looking area and see if you can get anything out of there. Even with ointment and antibiotics, if that is pus it will not dry up on it's own - chicken pus has to be physically removed. [IMAGE]
Click to expand...

We checked his eye last night, it looked inflamed but nothing else. Didn't think to check the beak. I'll do as you explained asap. Thanks for the visual, too, I really appreciate it.

Alternatives offered were Neosporin, VetRX, and Corid. After a bunch of searching on here, we decided to try what was suggested in this post about amoxicillin.

casportpony said:
Give 57 mg per pound of body weight orally twice a day for 10 days.
Click to expand...

As Wyorp Rock suggested, we checked his beak but found nothing alarming. Checked his eye again, cleaned with a saline solution & another dose of terramycin. Will check again this evening, with a 3rd amoxicillin dose.

We've got in touch with UGA's poultry center, just waiting for a return call. In the meantime, considering Liquamycin LA-200 a few other posts here have mentioned. (Like here, and here.) Not sure what's better, or if we should finish a round of amoxicillin first.

As for the rooster, Godzilla's staying cool inside the coop with food & water. No need to strain his bad leg. Appetite's still normal, drinks well, and while he's definitely fussed, he's been very good about all the poking and prodding.
Last edited: Sep 10, 2019

You can also order Tylosin online - some places still have that available.
https://www.jedds.com/shop/tylan-soluble-100-g/

The Amoxicillin may help depending on the cause of infection, keep us posted on how he's doing.

Thanks for the link! I've already got Liquamycin LA-200 on hand, but doesn't seem like a bad idea to have Tysolin/Tylan available too.

He's still about the same. Eating & drinking very well, giving him a mash and all flock pellets so he doesn't get anything in his nostrils. We may try to extract whatever puss there is from his eye tonight. Gotta watch more videos on it, I don't exactly feel confident in my skill level for something like that.

UGA's poultry lab would take him in for a thorough check-up tomorrow, but it's a (one way) hour & a half drive. Weighing the pros and cons of making the drive. It seems like an awful stressful trip for a sick bird but the alternative of just waiting for home treatment to kick in doesn't sit right either.

Hopefully I can "update" with a real status change next, whether it's his eye or the lab visit.
C

I tried baytril, mine had swollen eyes,would barely eat and mucus in their beak this sounds similar to what is happening to yours except for the limb in the leg ,after the first dosage they started acting better,now they are doing amazing,I tried VetRx and did help slow down the symptoms until I got the baytril,just a warning but separate him from the rest if he doesn't get better and if you haven't already,mine got all sick from 1 chicken,I waited too long to separate the sick one.

Thanks for the info, Chicken101-07, I'll have to look into Baytril. I'm glad to hear it worked out for you! Good point...I've separated him from the others now, broom closet's got a layer of straw lol.

Thursday night we attempted to remove the puss from his eye but it didn't work at all, in fact it seemed to only aggravate it. Moved him into the closet then. Friday morning, my dad volunteered to take him to the state poultry center. The vet quickly removed the puss, checked him over and ran a few tests, but couldn't give a definitive answer. He did mention Marek's as a possibility but hopefully early this week we'll get more info. Approved the dosage of amoxicillin we were giving him (125mg x2) and said to continue on, just increasing his food since he's a little underweight.

No apparent change so far; his eye is still swollen and he's not moving around much. But he's still eating/drinking very well & alert when interacted with. I'll update with any changes.