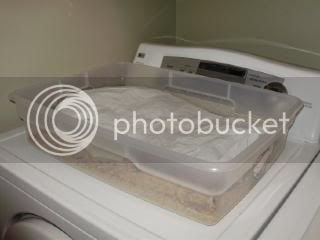 The mealworm bin. 1 tub, 2-3' of DUCK starter (you can use a variety of grain mixes, I just find the starter to be the least smelly), a few hunks of potato/apple on top, a few banana peels, mealworms, newspaper/paper towel layer over top. In the winter when the house is dry, you will need to spritz the newspaper every other day or so for moisture. Not a lot or the food will go moldy. This bin is on top of my drier because I am emptying it of mealworms gradually and won't be adding to it. The other bins are downstairs in the dark. 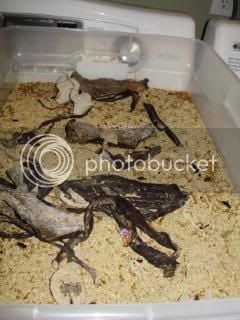 How it looks uncovered. The black things are the banana peels. They love them. Always remove any moldy food but be sure a worm isn't tucked up inside. Don't want to waste any!! 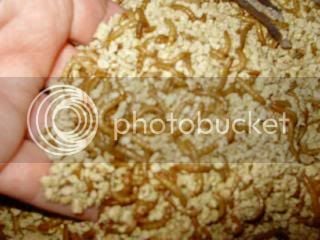 What you can look forward to. Be patient. It seemed not to take very long for the worm-pupa-beetle, small mealworm stage to take place but FOREVER for the mealworms to gain any size. But once that happens, there are lots.

In the spring/ summer I had 5 bins on the go to supply all my ducklings etc. I have scaled down for the winter but will ramp up production again about Dec/Jan. to avoid the lag between the small worm -large worm size.

When I had a lot of bins on the go, I would remove any beetles that I found and place them in a separate container to lay their eggs. Didn't want them to be eating any of their offspring (only read about that, didn't actually see it happen). I spent many a lovely summer evening out on the deck with a glass of wine, sorting my mealworms. I really know how to have a good time. But now that I don't require as many worms, I remove some of the beetles and let some stay. Not as vigilant.

I have also started a bin of the giant mealworms only because we spend a fortune on them at the wildlife centre. Now that I am raising them, I can see why. They are very hard to advance to the pupa stage. I have to put one worm in a old pill container with just a tiny bit of starter. I cover them over with a piece of newspaper and after what seems to be an eternity, they will change into a pupa and then after another eternity, a beetle. No worms yet but I just started this about 2 months ago. Here they are in their individual compartments. 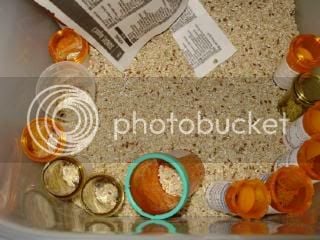 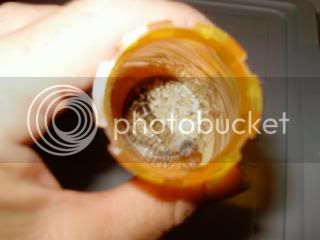 I have included a picture of a GIANT mealworm pupa. The regular sized mealworm pupa looks the same. Don't be fooled into thinking they are dead because they don't move around. You just have to nudge them and they twitch. Ewww. 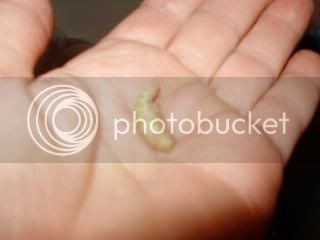 This is great! and very entertaining (it doesnt take much with me). thanks for posting this.

Thanks so much for sharing this.
Will definitely be doing this myself.

That was very interesting and informational..........Thank You.

This is great! I'm bookmarking it so I'll try it in the spring.

Can the frass be used for anything? Like, will the chickens eat it? Is it good garden fertilizer? anything?

Good thread! Thanks for sharing your hints. I tried to do this, and thought I would share my mistakes so that others can avoid them. I used a very small container (old lunch box, ~4"x8"x5" deep). That might have worked, but I kept it closed most of the time because I read that they liked dark. So it got moldy very quickly. I didn't count, but I think all of the worms survived anyway. So I just gave up and fed the worms to the chooks and composted the moldy substrate. If / when I try again, I will use a bigger container, and leave it open to the air or under newspaper as the OP suggests, and periodically remove the older apple cores & other food.
Last edited: Nov 5, 2008

Quote:
This was posted recently. I have seen mealworms at the local bird store (wild birds unlimited)
Last edited: Nov 5, 2008

So these things are beetles for a while? Don't they get out all over your house?

B
Mealworm farm out of control

Raising Your Own Mealworms
2