I think their called Beltsville small whites. Dose anyone have one or know what their temperament is like? Also, how well would they do with a small flock of chickens? (I know about blackhead)
Last edited: Mar 21, 2008

I would love to see a picture of a mini turkey!! Wouldn't that be a chicken?! lol!! see if you can find a pic, cannot imagine!!!

I remember when i was lil my aunt has a tiny white turkey that was a wee bit bigger than a hen. She told me she got it from McMurrys barnyard special. 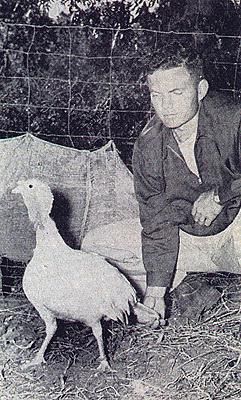 I remember it only grew to about this size and stayed like this its whole life.

Well that's kinda cute, bigger than a chicken and not as cuddly looking, lol!! Love the picture, looks like the days "Grease" was made in, loL!!

I had some, but a predator got them. They are just like regular turkeys, only smaller! They have the personality of the Broad Breasteds, more than the heritage turkeys. Very calm and people oriented.

I did not get them to breeding age, but I would imagine that they would be a bit aggressive with the chickens during breeding season, just like bigger turkeys.

They are quite rare. There are several breeders that sell on eggbid that you can buy from. Jerry Poole has one of the few recognized flocks of this turkey breed, and he is one of the sellers there. He is very nice and knowledgeable, but not very talkative. This is not to say that there is anything wrong with the other breeders - it is just that I have bought from Mr. Poole personally. There is another breeder that I know of - Duane Urch. You can email him at [email protected] for a price list. He doesn't have a website.

Thanks for the info! I hope to get in contact with one of the breeders soon.

C
How much do Turkeys poop daily?

Anyone have BELTSVILLE Small White Turkeys

What turkey breeds do you recommend?
2