Today I picked up a female lion head rabbit from a farmer at a local flea market for $10. It has the x large ears like a newzealand, the body size of a newzealand though I think she's more hunched like a lop( she's 6-7 months) She is white and has spots that are reddish brown going down her back and has a mane and a bit of longer hair on her hind.The rabbit farmer said she would make a good meat rabbit, he's selling her because there is no money in the big rabbits just the dwarf. I thought lion heads were supposed to be dwarfs? this girl is huge! 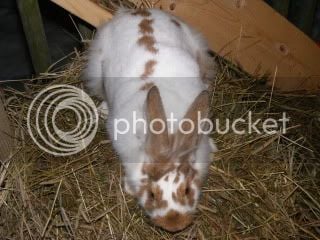 The other "lion heads" were smaller and had a better mane. she's in the corner of her cage because she's scared so it makes her look more hunched then she is.
Last edited: Mar 1, 2010

Might be a newzealand/angora cross. Post a picture and maybe we can tell you what it is.

The gene that causes the lionhead coat is apparently dominant, so it's very easy to track. The mutation that produced it only appeared about 18 - 20 years ago, it has become outrageously popular since then. An great deal of rather indiscriminate breeding has been going on as everyone and their cousin tries to keep up with the seemingly insatiable desire for pet lionheads. Because a lot of lionheads are rather inbred, and because of some rather annoying health problems that persist in the breed, some people are outcrossing to all kinds of things to "deepen the gene pool." While your animal is an extreme case, there are many so-called lionheads being bred that have very little in common with the animal described in the breed standard, other than the signature coat. Even that is highly variable, most of the lionheads that I have seen look like Jersey Woolies in an awkward state of molt.

The pictures I took were the best I could do she's still skiddish.

looks like a velvet lion meaning mini rex x lionhead. Second generation breeding possibly third.
what is her weight?
mini rex were being introduced into some of the teddy lionheads to keep the wool from matting as is common with most lion heads.
she looks to be an oversized mini rex closer to the 5 lb weight.
as a meat rabbit she shouldnt be bred to anything larger than she is as it will cause kindle issues.( baby size and difficullt birthing).

She is not even close to mini rex size she's 100% bigger then any I have owned,I find mini rexs have a wild look to them almost hare like,she's stocky.Could she be part standard rex? I might get a scale tomorrow just to see and to check opur males size.She has alot of wieght on her.
Last edited: Mar 1, 2010

I just wieghed the male and her, she is 8 lbs he is 10. The young girls who are over 4 months are 6.5lbs. Now I'm filled with scratches

When I said rex, I ment standard, not mini.

Working on getting her use to people

Rabbit made soft poo, but not cecotropes.
2 3

Peachick sick and can't hold her head up
2