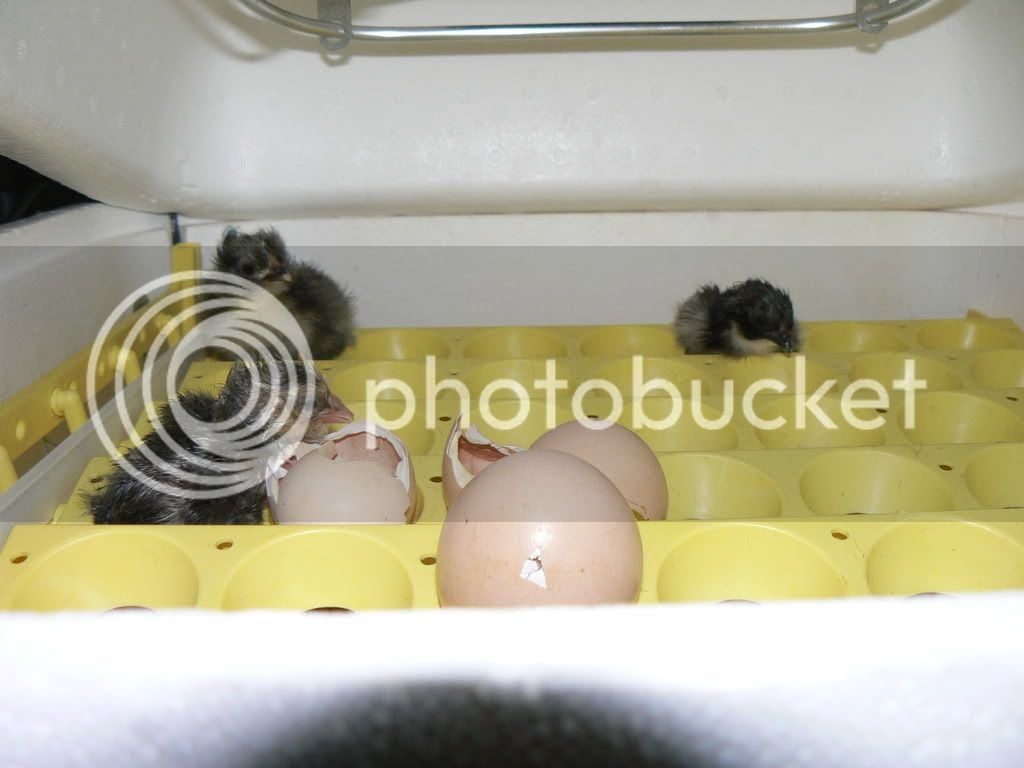 I'm not too sure how this happened, I must have set a few eggs and not written it down. I know I set some the beginning of February but they were all thrown out due to wild temperature fluctuations in the 'bator. I had been candling these but had it in my mind that they were due next weekend. I was pretty sure they weren't going to hatch because I hadn't added water for a good two weeks- humidity was at a constant 16% all through the incubation. I was still trying to get the temperature to stabilize.


You can imagine my surprise when I heard the peeps coming from the basement this morning. Yes, they were still in the egg turner and it was running. Three of the four eggs had hatched and number four (the egg in the front) had just pipped- still waiting on that one.

I'm pretty sure these are mutt chicks. Daddy is a Blue Orpington though so it's possible I've got a couple little blue orps in there.

What a fun surprise. Poor little peepers - they had to work on that positioning and pipping with that turner still going.

thats a fantastic story, what a surprise for you, huh? Congrats!

That's a Great Surprise! I had no idea chicks could hatch with such low humidity.

Quote:
Me neither! Like I said, I had pretty much written them off- temperature fluctuations were wild. As if I'm going to throw out an egg that looks like it might be developing though!

I'm thinking these are some pretty tough little chickies!

Cute surprise! Good thing they didnt get caught up in it.

since the egg turners were still working. I am glad the babies were not hurt by them.

Quote:
Me too! The first thing I did was unplug the darned thing. Once it's off it's not an issue is it? I didn't want to disturb the last egg to take the turner out.

Of course, I just took the turner apart and disinfected it and now they're going to get hatching goo all over it!

Has anyone else NOT had a good experience with the Nuture Right 360?
2