Mystery illness is striking again...one bird dies every three weeks or so.

Today I went out and found one pullet with a sticky nose and something bloody looking in its beak (?!?) and another is pullet looking sleepy and not hanging with the rest of the flock, but she doesn't have a runny nose or any other symptom that I can tell. She was perfectly fine yesterday.

Tylan 50 doesn't work, all of my other sick birds have died despite Tylan injections. (1/4th cc for 5 days.) They had the symptoms of IB, including one survivor bird who lays ridged shells.

What else can I do? I can't afford to take them to a vet. I asked the university avian expert about where to get a necropsy and he told me I would have to pay a vet to do it.

A friend who purchased birds from the same sick flock I did took hers to a vet and he said to use Terramycin. What do you think? I am desperate to make the illnesses stop.

I decided to go ahead and inject them with Tylan to hopefully at least head off the illness until I could figure out what will cure them. When I was looking for a spot on the back to inject my BLRW bantam pullet I found this: 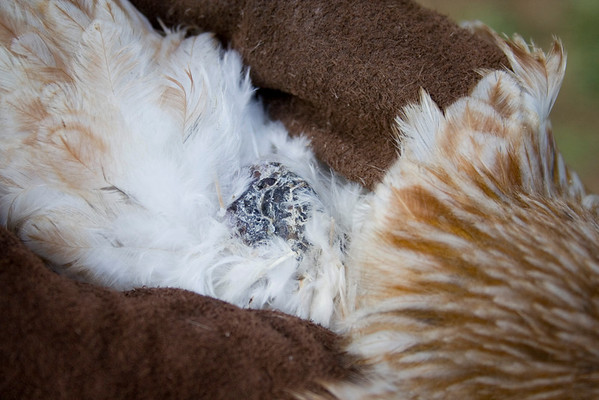 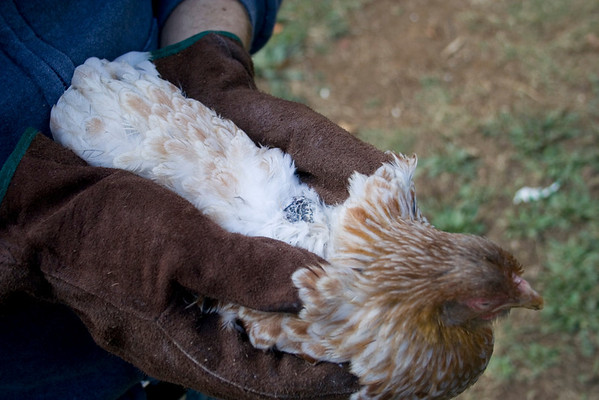 (My DH likes to wear his leather gloves when holding the birds, he's a dork...

Here is a normal part of the skin, for comparison. 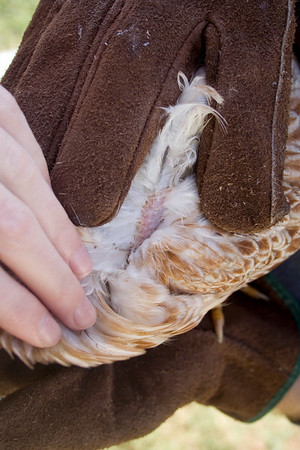 Now I'm really grossed out...what is that huge black thing? It was hard as a rock.

Also, it's worth mentioning, a couple weeks ago we found a dead bird with the same snotty head symptoms my other birds have died of out in our neighbor's side yard. It was a robin...
Last edited: Oct 31, 2008

is it spreading to the other birds from onley 1 bird? Or is it just going around

Just going around. They will all be healthy, then one will get sick and eventually die, all will be healthy again for a few weeks, then another will become mysteriously ill out of the blue.

OMG! im so sorry. is there many left?

IB does not kill birds.

I'm going out on a limb here and guessing ILT. There has been alot of it going around.

The only way to know for sure is to have a sick bird necropsied.

oh ok i thought it killed them. do you have a big farm? what kind of birds do u have?

oh no! I hope this stops soon. If it were NC they would come out for a small $5.oo dollar and 5 cents per bird. We are a poultry state. When mine get a bit older I want to have them checked for everything. Jean

I live in a suburb and have them in my backyard. So far over the past three or four months I've lost three birds to the snot take over and one died suddenly, not sure why. Right now I have nine birds left, two are sickly. Another one is a little raspy but has always been that way and doesn't act sick. One got sick with a very runny nose, bubbly eye, and everything but survived.

Who should I call to check about testing from the state? I was hoping the avian expert at our local university would know, but he didn't seem to. I didn't ask him directly about testing for my flock though. Is animal control the place to call? I called them the first time a bird died to ask how to best dispose of it and they assured me I should just toss it in the trash...they didn't seem very livestock smart.

You should call your state vet if you think it might have spread to/from wild birds. I can't see how he can ethically charge you, since he is paid by the state for this very kind of thing.
Last edited: Oct 18, 2008