Muscovey owners/breeders can you tell me what color...

I have three new baby muscovies. Can anyone tell me what color they might be as adults, especially the yellow ones? I know the brown and yellow one will be mostly black with some white when he grows up, because the one I raised last year looked almost exactly like him. I always thought the yellow on the muscovey turned white, and if so, does that mean the two that are almost all yellow, with a bit of brown on the head, will be almost pure white with a black spot on the head?

If so, that will be cool!! They are twins. 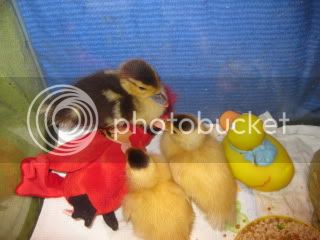 LOL I think rubber ducky will stay the color he is though! LOL

Yes the yellow ones will be white. Some of mine have kept there Black spots when they feather out some of them have lost it and become pure white. They are cute!

Thank you so much for your answer! I can't wait to see how they look when grown. White Muscovies will be awesome. All the ones around here are black and white. My husband thinks it is because the yellow ones are so bright, they are probably the first ones the predators see and get so they never make it to adulthood! And, he is probably right. If I can raise two white ones that will be wonderful!
Last edited: Jun 13, 2009

I will post a pic of my white adults tomorrow. Around here they are almost all white. The hatcheries here only sell them in white, I think it is because they are bred as table birds and the whites make a more attractive carcass.

Usually the white cap will go away after their first molt. It's basically a heterozygous white, I believe. Homozygous whites do not have the cap.

Where did you get your scovies? They are SOOOOOOOO CUTE!

We had a hen hatch out one of the yellow with black caps this spring. She is fully feathered, white with the black on her head. Even though she's beautiful as she is, I'm glad to hear she may lose the cap, I so want a solid white one, all of ours are colored, solid black, blk/wht, blue, chocolate and a lovely barred female this year as well, but would really like a solid white. Yours are just adorable. They are so fun. We just had another hatch out 14 babies on Wed. Enjoy, they grow in leaps and bounds!!!

Thanks everyone! I am so excited to see how they will turn out.

Goat Walker, I got them from Little Duck, who I got as a rescue when she was about 6 weeks old. I got her and a young drake with Angel Wing, from a rescue. Little Duck didn't have Angel Wing, so, when she was big enough to fly, she was allowed to fly around our yard, out of the pen when she wanted to. She started hanging out with the "wild" Muscovies that came up in my yard to eat. She did this for months. She really enjoyed being out of the pen, as I actually had two HUGE drakes that wouldn't leave her alone. One was an orphan baby I raised from last Easter, who was now an adult, and the other was the young drake I adopted with her, who was now an adult. Both of them with Angel Wing (the drakes).

Anyway, one day Little Duck disappeared. I figured either something got her, or she left with the "wild" Muscovies. She was gone for a couple of months, then one day I went out to feed, and there she was, with these three little babies with her!! Now, I know that most Muscovies start out with a much larger clutch of eggs, than 3, so I figured either they didn't hatch, and only these three did, or more likely, she had already lost some to predators.

So, she stayed in the yard, out in our ditch, which was full of water from the rains. Came up to eat twice a day, with the babies. By the third day, I was really sweating it. I had seen several red-tailed hawks flying around. Then one day I was watching out the storm door, enjoying the ducks, when in broad daylight a HUGE raccoon was walking right across the yard toward the ditch where LIttle Duck was with the babies! Yikes! I yelled for my husband, ran out the door to scare off the raccoon, and we decided right then and there to catch Little Duck and the babies. Well, the babies were easy. We STILL haven't caught Little Duck. Because I let her roam so much when she was younger, she isn't tame and won't come up to more than a few feet of us. We tried everything, including using the ducklings as "bait" LOL

I decided the best thing would be to keep the ducklings and raise them in the house until I could get them big enough to put outside in a covered and safe pen, with my other ducks. Little Duck is still here. She hangs out in the ditch, comes up to eat, etc. She knows I have her babies. I felt really bad taking them away from her, but figured they wouldn't have had much chance outside with the hawks and raccoons looking to eat them.

There is another mama duck that came up the day after Little Duck did. She had 6 babies. Now she is down to 4. She, too, stays out in the ditch, in the yard, comes up to eat, etc. I am watching her closely, but she is one of the "wild" ducks. I felt because Little Duck was mine from a rescue, I didn't feel too bad about taking the babies, but this duck is "wild" and I don't want to take hers too. Although, I "might" if she loses too many more. I know the predators are just trying to eat too, but still, I don't want to see the ducklings be food!

When I got Charlie, my first Muscovey drake last Easter, it was the same kind of situation. His mama had come up (wild duck) with four babies. Within a day she was down to three. My father-in-law (who lives next door) saw them in the ditch by day three without the mama. They were there for about two hours with no mama. A couple of hawks swooped down and grabbed two babies out of the ditch, right in front of him!! He decided right then and there to save the last little one. I wasn't home at the time, but he got his fishing net and scooped up the little one. When I got back from the store, he told me he had something for me! A baby duckling. We never did see mama duck again. I don't know what happened to her unless something got her first and that is why the babies were alone.

Anyway, I raised Charlie. He is now a huge Muscovey drake who loves to play soccer! LOL Seriously, there is a thread about that a couple of weeks ago, complete with pics.

So, that is where I got my Muscovey babies.

Edited to add: I plan on clipping wings on these babies at the appropriate time, as I dont want them flying off like Little Duck did. These guys are going to be more like pets, if possible, like my two drakes and four pekin/swedish mixes.

Your little brown and white one will not necess. be colored and white. It looks like he sports a (nearly) perfect wild type color pattern, which is all black, with brown, green and purple irridescence. Eventually in the wild type white patches develop on the forewing--but that takes some years.

Good 'wild type' muscovies are hard to find. So that one may be your finest bird out of the three. And since he has a dark bill--not blotchy pink, and flesh legs with dark shading, also indicate you may have a perfect 'wild type' pattern there!

Nice thing about wild type too--imho--is that their caruncles are more black and are smooth, compared to the warty, red ones you would see on a regular 'black' muscovy.

Black muscovies are different from wild types, even though both are black--genetic thing

I have two little ones just like your mallard looking baby, and I am hoping for wild type. A third has a mostly pink bill. That indicates a single gene for white in this bird, so it will be black and white and not a 'wild type'.....

scovies are the best

AWW! I saw the soccer thread , lol. that was cool. We haev one "wild"drake that comes to the backof my barn everyday for some corn, but thats not enough for me. I need my own, lol. Originally it was two drakes and one female, but then this past year only the one male has come back to visit.

What breed will my young ducks be?

What breed of TSC ducklings did I bring home?

A
Muscovy Drake Genetics - Who to Keep?!
2

What color is this Muscovy duckling?
6 7 8