These are our first ducks. They have been under our broody cochin, who is watching them and gently mothering as the hatch. Out of 12 - 4 have hatched fully. 3 look like they have died before making it out. We are leaving them in there just in case. All 3 have a nice size hole and their bills are sticking out, but they appear not to be breathing or moving. The others that are still in the shell, we can still see them moving around through the hole. The 4 that have hatched seem fine, they are drying off and resting. Is it common for muscovies to make it this far and die just before hatching. It has rarely happened with the chicken eggs we have hatched, that's why I'm asking.

I don't know. Maybe it's a weird year for muscovies? All I know is my 1 year old mama duck sat on her 7 eggs for 44 days before the first one hatched! I've got 4 out of 7 hatched so far. No idea about the other 3 but she's still on them and it's now day 45!

As of right now there are 4 hatched and doing well, 2 about half way out, 2 have not pipped - 4 we have confirmed died after pipping the shell. So sad, all that work, getting so close, all just to die in the shell. My theory right now is the heat wave we are having, all the birds are panting outside, the Mom who is sitting on them has been diligent and with them panting all day. The last 2 days we have hit 100, and before that it was in the high 90s.

Could be they don't have enough humidity. Ducks typically get off the nest once a day and eat, take a bath, and poop. When they get back on the nest they have some moisture remaining on their feathers that not only creates some humidity but also gets on the egg. Chickens don't offer that. If there are any eggs remaining it might help to mist them with some warm water but it might be too late.

I will remember the humidity misting thing for next time. Hopefully though we will have a muscovy hen by then to do the sitting

Final results are in we have 5 baby muscovies. The hatch went well... worse than expected. I blame the extreme heat, but who knows. Maybe it was the humidity like muscovy said. I was also told that sometimes they develop funky with a leg/foot kind of around the front of the face, so they can pip, but can't move their head enough to get more done. That may have been the case, but who knows. I opened all the ones that died late last night during the hatch to see them, and they did have a foot over their faces. 2 were still in the shells, so we helped them out gently. When we did get those free one was strong and bright eyed, the other was taking shallow breaths and very lethargic. The one was dead when I woke this morning. Maybe if we had helped the others out earlier in the hatch they would have lived. At the very least this was a good learning experience and I am very confident next time we will do much better.

So here are the official #s:

2 - underdeveloped - died at some point during incubation

Of the ones that made it, 2 look to be lavender, 2 look chocolate, and 1 looks black. At least that's how it looks right now.

I pinioned them this morning, man was that easier than I thought it would be

They barely noticed I did it, and there was very little blood, I dabbed the end in neosporin for protection. Cutting my dogs nails is 100x worse than pinioning a day old duck 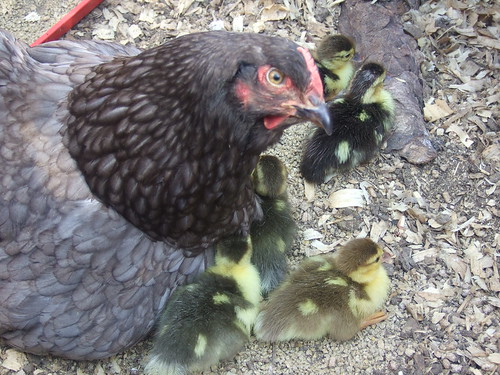 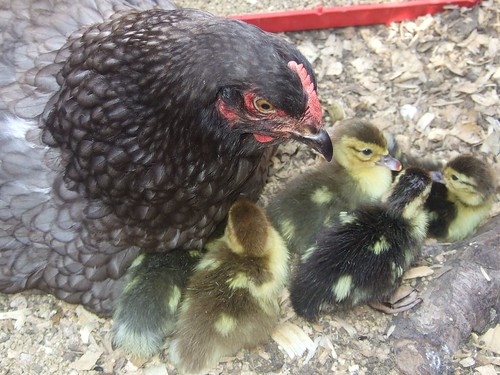 they are really cute... sorry you lost some though =[

Ooh, they are beautiful! What a good mother hen too!

Too cute,,,,I love their mother!

congrats on the babies... hey are so cute