My blue hen and my white silkie rooster had yellow babies. How is that possible?

I'm an amateur chicken raiser. I began five years ago and this was only the second time I've ever had a standard-sized hen hatch out chicks. (Bantams now...) But I'm also a biology major and I like to think that I have a good understanding of general genetics. The chicks I have do not seem to follow Mendel's laws.

The facts are as follows:

Silkie white is recessive to almost everything and therefore automatically homozygous

Blue chickens have a lavender and a black color allele. Heterozygous, but co-dominant, and you can tell by looking at the chicken what the colors are.

The silkie is definitely the rooster, as all of the chicks all have some combination of fuzzy legs, six toes, and black skin. The hen has pale skin, five toes, and clean legs.

I should have half blue/lavender chicks and half black chicks, according to everything I've read (this useful site and a few others.) I was rather looking forward to that offspring, really. But what I've got is three chicks that are definitely blue (one has yellow spots on his head, but his plumage, thus far, is blue) and four chicks that are yellowish-brown in color--like slightly paler Rhode Island Red chicks before they get their adult feathers.

So if anyone knows what is happening here, I would really like to know. Thank you for any help. 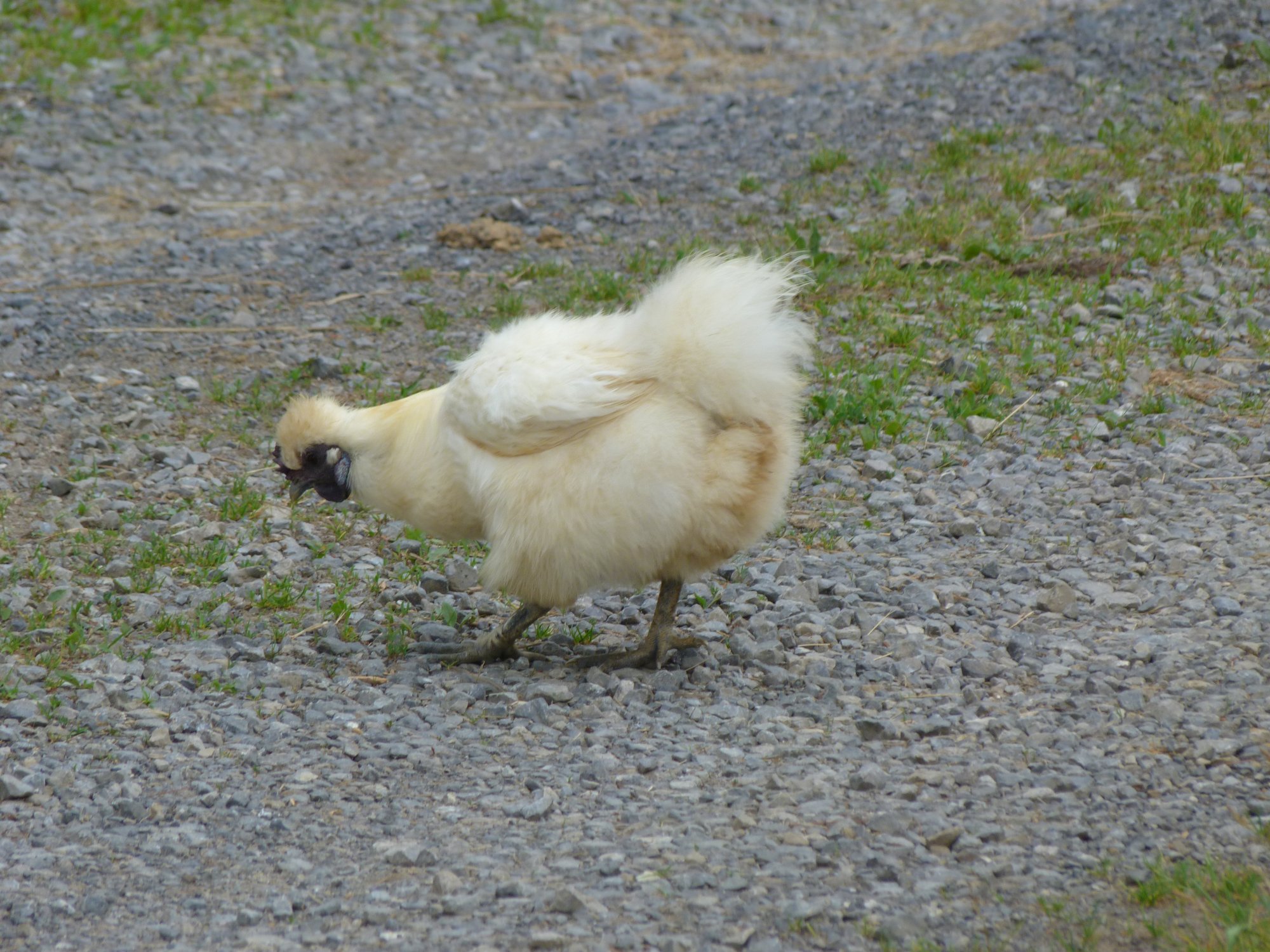 Silkie hen (she looks like the roosters, but we got rid of them. Ergo, no pictures. And she's dirty, not yellow.) 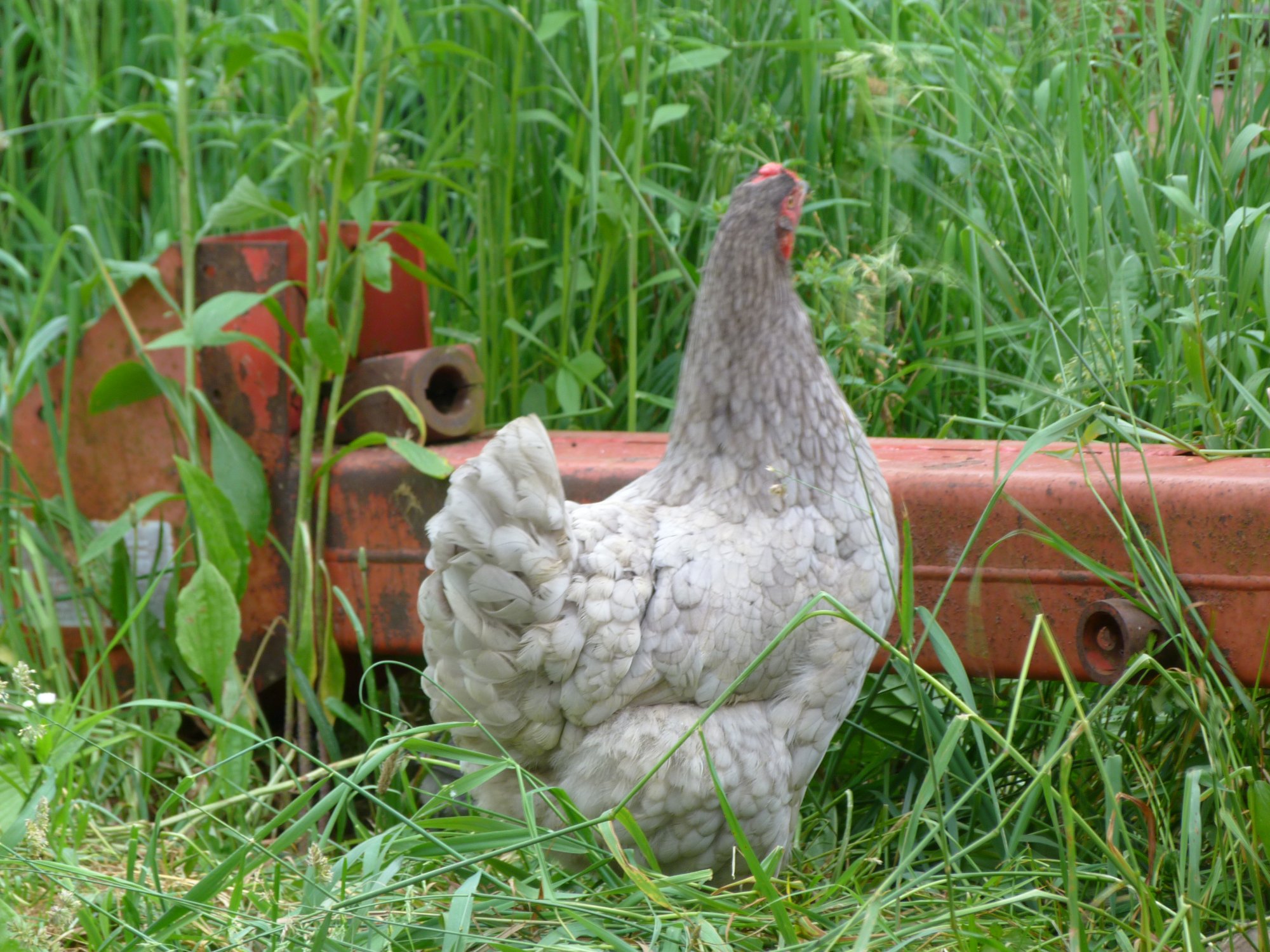 Blue hen. She looks a little pale in the picture. 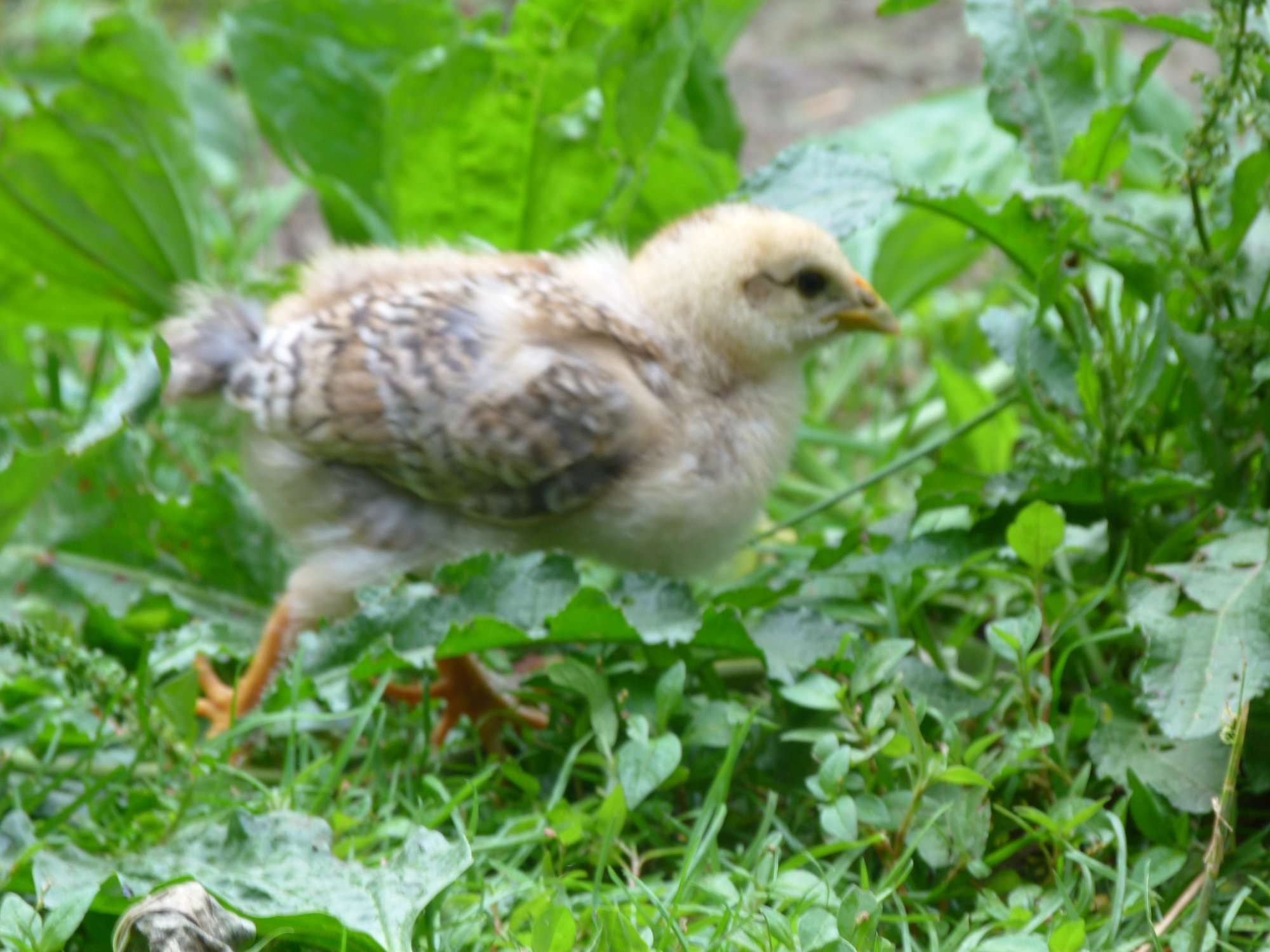 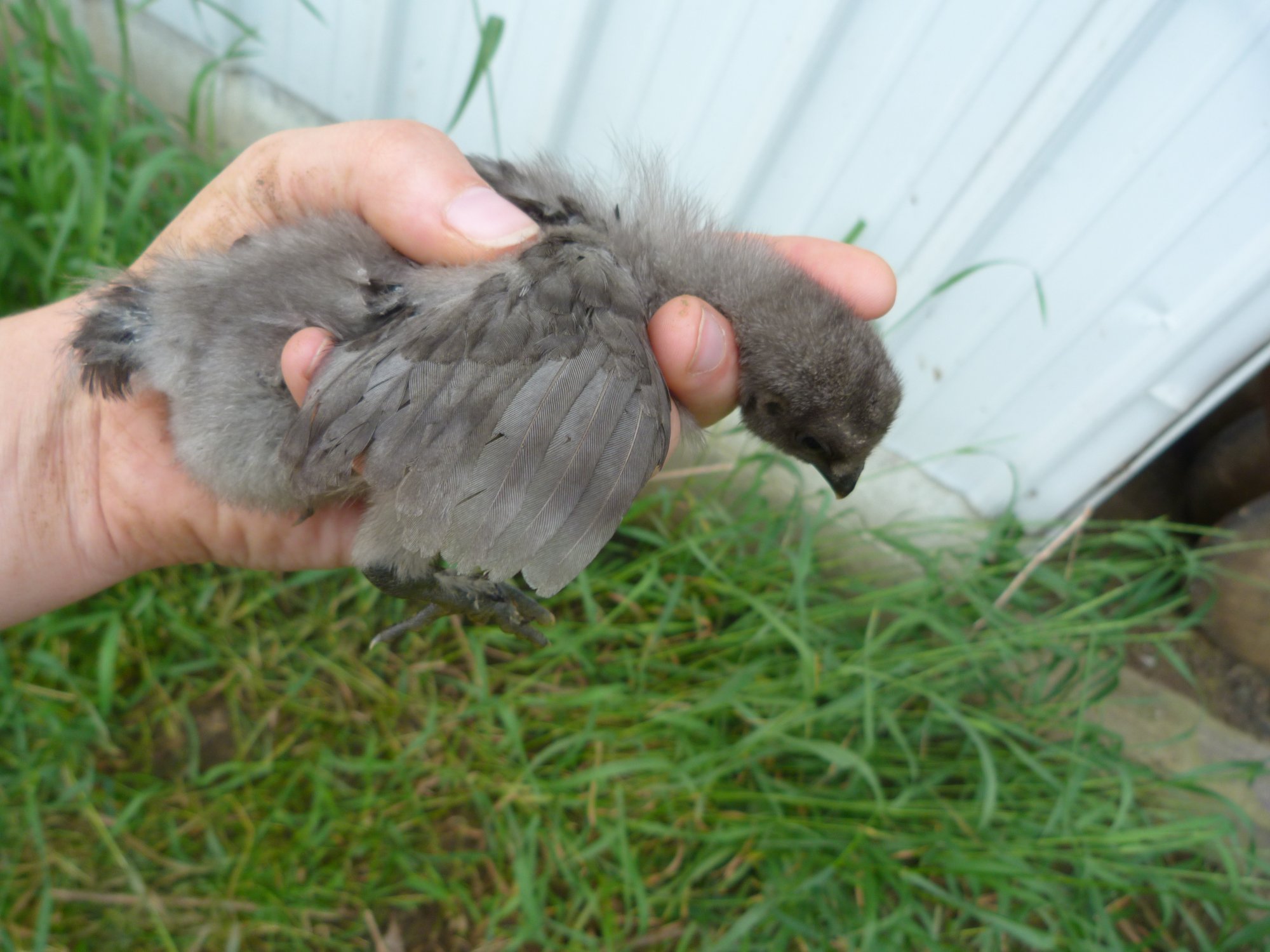 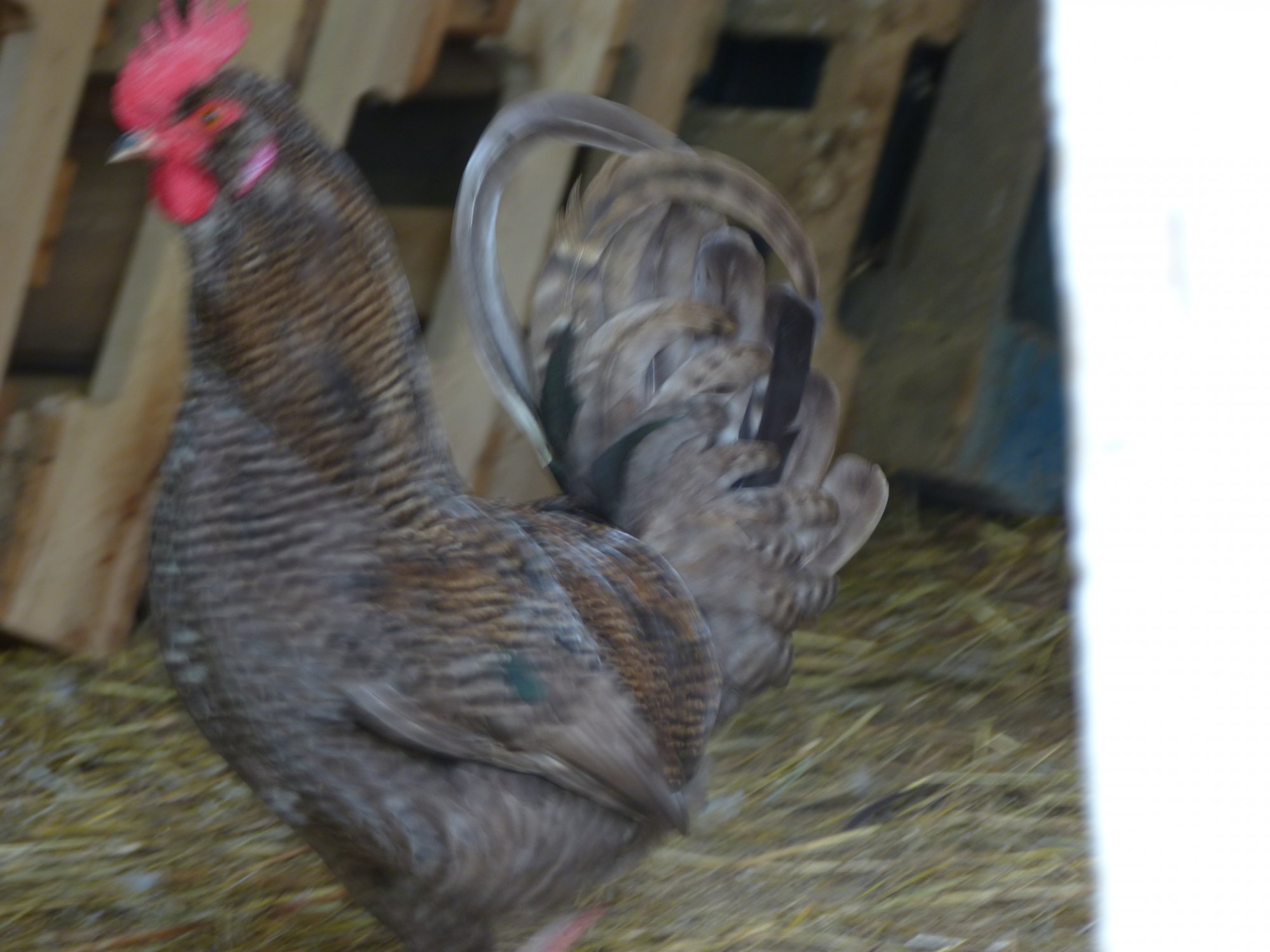 Blue and lavender are two different things. Blue is a dilution of black, and lavender is a totally different gene and affects red as well. If the silkie white is c/c - which I think it must be - then it carries colors/pattern but the c/c is blocking it.

Okay--Thanks,SunHwaKwon. Looks like I need to find a better site for color crosses.

I think that one of my main problems is that I don't know the genetics of my roosters--while none of my chickens are pedigrees, most came from hatcheries and were bred for a color. But my Rhode Island Red rooster ran off to the neighbor's last winter and refuses to return, so I bought a barnyard mix at the local auction and added him to my flock (that's the crele rooster, Dominic, above.) But we've hatched eggs under ducks and all the chicks he's ever fathered have been a.) mother unknown. and b.) black with lighter barring, despite the fact that my flock is a rainbow.

The blue parent could have only 1 copy of the black gene instead of two, if he is the father, so half the babies would not be based on black/blue but will be some other color base such as partridge, depending on the base color of the silkie which is also likely partridge or wild type. The white just covers it but no chicks will be white since the white is likely recessive white.
Is the mom the white silkie? If so her chicks could have the 5 toes etc because of her and the father could be unknown. The crele looking rooster could be dad too I would think, and give the lighter color chicks and the one with lighter dots on head.
Cute pics!
Last edited: Jun 23, 2017

It might be more technical - if you don't know who the parents' parents are, then it might be part of their breed. Genes are complicated!

When you look up genetics on a bird, make sure you look at breed specific info too and not just the general stuff. Some breeds have genetic works that aren't obvious, like RIR looking like black tail red but actually carrying the Columbian gene.

The barred blue was the father to at least one of your chicks. That's how a blue chick had a yellow spot on it's head. That's cuckoo/barred specific, the Silkie was not the sire of that chick.

Egghead_Jr said:
The barred blue was the father to at least one of your chicks. That's how a blue chick had a yellow spot on it's head. That's cuckoo/barred specific, the Silkie was not the sire of that chick.
Click to expand...

Okay, but why is the chick a.) blue with no markings thus far and b.) dark skinned? If Dominic (the crele) is his father, then both parents would have five toes and light skin. He has six toes and dark skin.

Perhaps skin color and six toes (or any 5+) are not completely dominant or controlled by multiple genes.

R
Can someone explain the "blue" genetics to me?

Breeding silkie + 2 other breeds. What to expect?
2