So today is pretty nice out and I decided to take Tucker for a walk around a local lake with a nice paved trail. It is just over 2 miles. We go for walks around the neighborhood all the time and he goes to the feed store and petco/petsmart with me. He has been to classes too. Just so you know it's not like he has never been socialized.

Well apparently the big bad lake was going to swallow him up because he spent the first 1/2 mile at least trying to leap into my arms. I treated him everytime he stopped and started walking. He was also afraid of every jogger at first and then there was the evil STROLLER! I asked the people if he could sniff it as he had a total barking caniption fit when he saw it from a distance. They agreed and he was OK once up close with the encouragement of treats.

It took him to about the mile marker to figure out that he didn't have to hide behind me when people jogged by and that if he kept walking he would get a treat. We met a weimermier (sp) and cautiously sniffed butts with her (treat) then after that it was all good and he started to actually approach people. (then look to me for a treat

I know that he is an observer and a thinker (a little bit of a worrier) but to try for 1/2 a mile to get me to carry him was just silly.

p.s. I am so glad I only took him and not his brother too.

Jax is like that. Kane is up for anything, fortunately. I love the name Tucker, should have named one of our boys that, but "Tucker vom Tucker"? Just doesn't have that ring to it.

The thing was when he was little (4- 8 weeks) he was the adventurous/fearless one. May have to start bringing the whole bag of treats. Eventually I want to take him on trail walks. Of all my dogs he is the one that needs "stuff" to do. He started jumping fences when he was 5 months old (he is 7 months now)

This is him watching me out the window wishing he could eat the chickens... 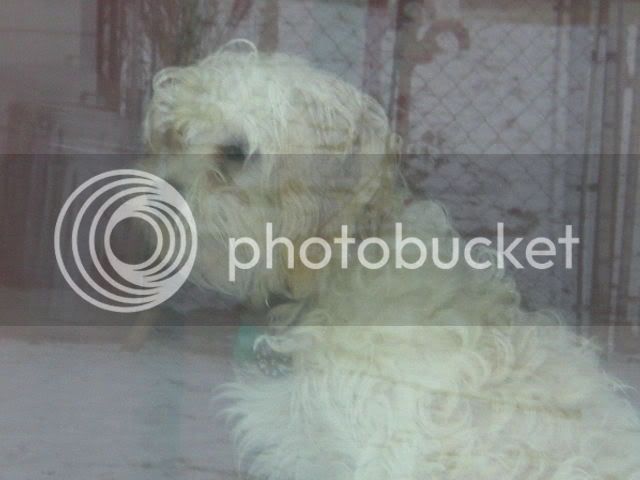 How to get my dog to stop barking at other dogs!!!!? I’m desperate so we don’t get kicked out of agility!!!!
2