My feather footed chicken got attacked by our dog

We have a feather footed chicken, Little Miss Muffet, we was told she was a Maran, but now we have doubts.
Any way, she just about 20 minutes ago got attacked by our dauchshound, Gus, and he tore of feathers from her "butt area" She is bleeding slightly, in what looks like the feather follicles, but I am not sure.

It looks like she has some openings in that area, but since I have never looked a chicken in the butt before, I am not sure that is normal. It looks like, in lack of a better term like a large human female genital. Is that normal, or did the dog actually get skin as well? Either way, he is locked up in the shed for now...time out(!) and she, Little Miss Muffet is in a dog kennel on my counter in the kitchen. I put some neosporin on it, not knowing what to do.
Does any body have any thoughts?
I am posting a pic of her before the attack and if needed I will try to take a pic of her wound, just let me know if it is needed for advice purpose. 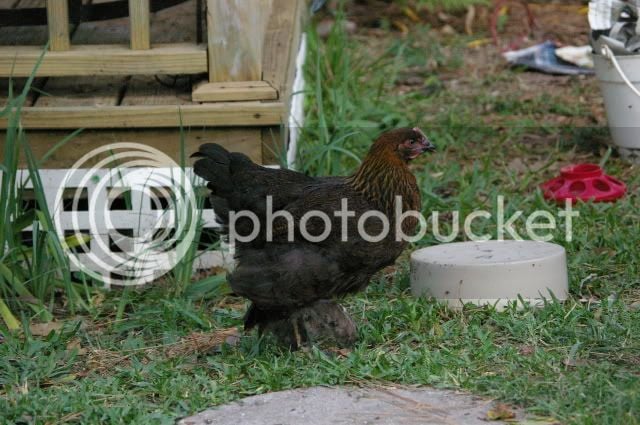 By the way what breed do y'all think she is?
Thanks for all the wonderful peeps on this awesome forum.
Last edited: Oct 16, 2008

sorry to hear about your hen. would u post a post attack pic? if it doesn't look too bad, missing skin and hanging flesh, alot of blood or tearing she may be okay w/ the neo sporin. but pics would help

Ok all, Here are some pics of injury.

First pic is of her from behind, sitting with butt up.

The second is aclose up of injury. I don't know if this pic is upside down, but I don't want to bother her anymore so just exercise the thought of it being upside down...potentially.

I hope this helps.

Thought I would Bump this so others might look. And give there thought's

OOOh, the poor baby! :aww
I can't offer much in the way of help, but I can tell you that your girl looks very much like my Partridge Cochins.

definitely missing some skin there. i would leave it open and let it scab up. just be sure to keep her clean. if she's getting it dirty then i would use the antibiotic ointment. She'll be sore for a while but i don't think it's a fatal wound. are you sure she wasn't bitten anywhere else? Puncture wounds can be hard to see and cause much more damage.

I saw it happen, running for dear life to help her, and she was putting her head down in a corner, to protect herself I guess, so that way of course her butt was vulnerable.
The previous owner had her wings cut so of course she couldn't fly to safety. I will never cut my chickens wings, poor things can't get away.
I have put some Bactine on it, being that it is in spray form rather then a gel/lotion like neosporin.
Do you think that might be Ok, or should I not do that again and instead do neosporin? Could her wound be sewn up?
She is still inside and not happy about it. I just checked on her and it seems she looks sleepy. Is that bad sign?
I sure hope that stupid little dog didn't hurt her so bad she is dying.

as long as it isn't leaving a greasy residue it should be ok. you could sew her up but it will cause her more stress in doing so. if you do sew her up then using neopsporin or other gel will be ok. i would only keep her inside if there is a fly problem outside. personally i would put her in a large rabbit hutch with a thick layer of shavings so she could still see her mates, just until it scabs up. it looks like she has enough fluff on her bum to cover it from her mates eyes so they wont peck at her when she is released.

no i dont trim wings either. and i agree she looks just like a partridge cochin.

I just took her out of my chicken hospital (dogkennel), to see how it looked, and to see if I could clean her up a little bit more.
I dabbed the area with a sterile gauze pad, and some blood stained it rather easily, so she is bleeding though not profusely. I did put on some more bactine, first I did try neosporin, but it wouldn't stick, so I sprayed bactine, it is like a antiseptic wound cleanser (human grade).
She is calm when I attend to her, so I hope she understands that I am not trying to hurt her, but rather help her.
We just had a cool front blow through, so it is in the 70's outside, and damp, due to a lot of rain that passed through yesterday. Do you think I should let her out?
I don't have a rabbit hutch, but I have a medium and extra- Large sized dog kennel, should I put one of those in my coop so she can go and hide if she feels the need to? Or should I just keep her away from the flock for now?
She is rather young, mabe 4-5 months, or so we were told at least, but thena gain we were also told she was a Maran, however y'all saying she might be Partridge Cochin, sounds a looks a lot more likely.
Any help with what I should do would be sa very appreciated.

Thanks, Petra aka, Kyckling mamma

Sorry that your birdie got hurt...
the top opening that looks like a slit with lips (oh brother, Where's CarriBrown?) is her vent where eggs and poop come from.