My Flowers, beautiful bouquet of Bantams

I didn't appreciate a gift at first when I inherited a very wild flock of Dutch bantams. The previous owner got his arm ripped by the rooster when he caught it, too. He said I didn't have to keep it: "That white rooster is NOISY! Your neighbors'll hate you..." was the warning.

I thought, well, he's had a health scare, maybe he'll want them back. No. It cost too much. Well, I'll keep them and maybe give them to a neighbor if she gets her new coop done. No, she hasn't touched it and she wants chicks, something her very, very young daughter can help her with and not be scared. Well, there is always the freezer, I thought.

I built a new winter coop, put in a double pane plexiglass window, a triple layer of perches so they could sit in the sun. The rooster became Cockadoodle. The hens started talking to me, running up to me. I took a good look and discovered some have this funny double horn comb...like cow horns or something.

I thought they must be some mutt flock and all mixed up. Two hens came with a chick apiece. I was given three more week old chicks, unrelated, to raise to be tame. I inherited the school hatch that also had bantams.

Who knew what kind of bantams. I half heartedly began researching on Feathersite to try to figure out what I might have. For awhile I only thought three hens were a lighter color of my standard "Sunshine Sisters" the BO's, but a washed out color.

Now, since they are tamer and after only three nights in their new coop, they are not afraid when someone (me) looks in their window and boy do I feel like a happy little girl with a brand new child sized play house that I can stand up in, you know the kind, the kind you never got as a child...I framed the window myself and it is not square, but the bantams don't know and don't care

They look like a beautiful flower arrangement, they all fit, they are different ages, they live peacefully together, I LOVE THEM and if I had a bouquet smiley, I'd post it at the end of this! 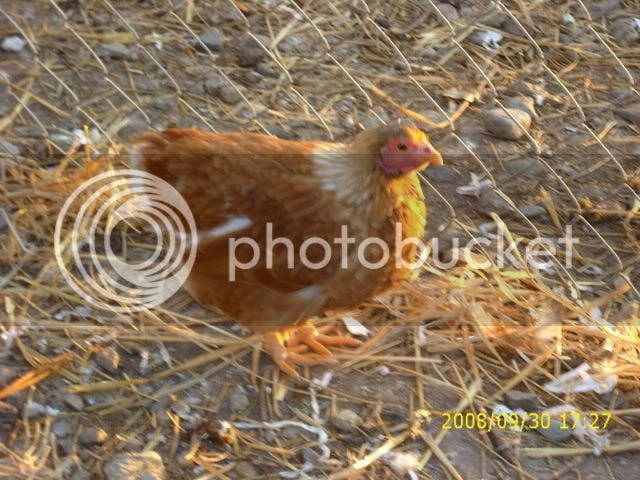 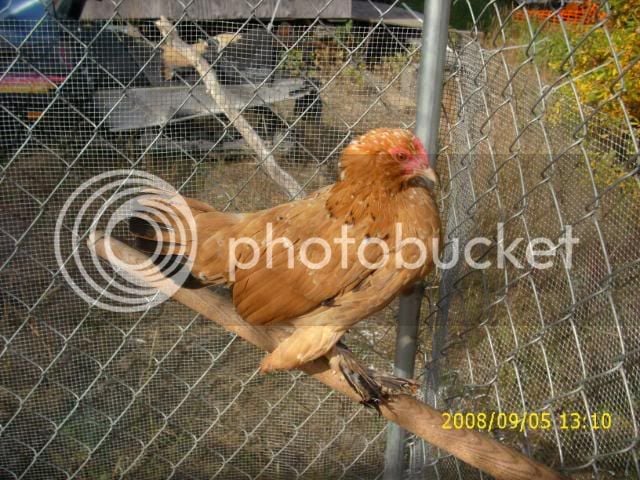 She talks to me, sits on arms and shoulders like a parrot and I believe she's a Mille Fluer D'Uccle 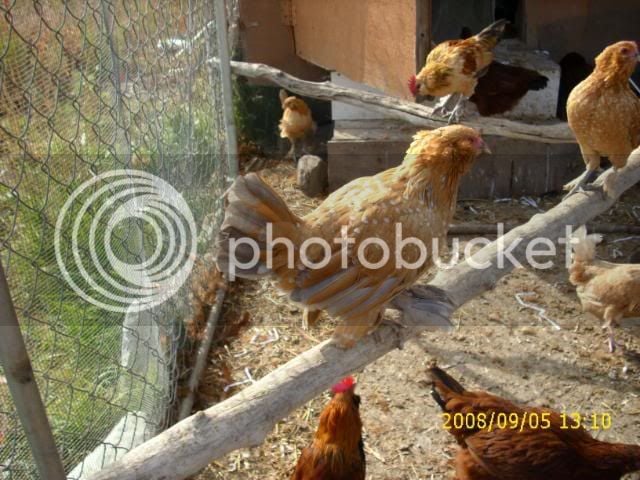 She's a Blue Buff D'Uccle and she's got a sister the same, in front of her and below is a close up: 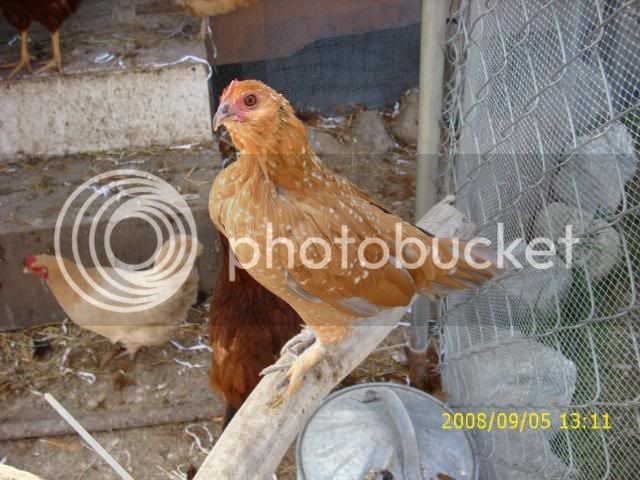 Sister to the two above, and you see one of the three Bantam Buff Rocks IN Front of her 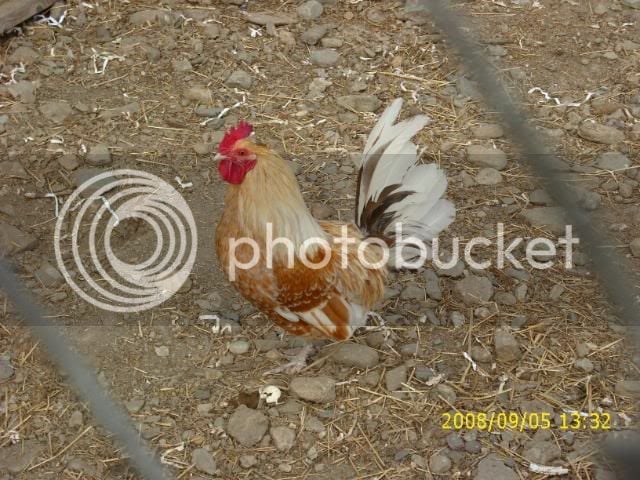 Responsible, kind, caring, Yellow Neck D'Uccle Rooster named Cockadoodle (last night one of the chicks was hunkered beneath him to warm up and he's so wonderful!
(Loud, proud, and loves to crow, too 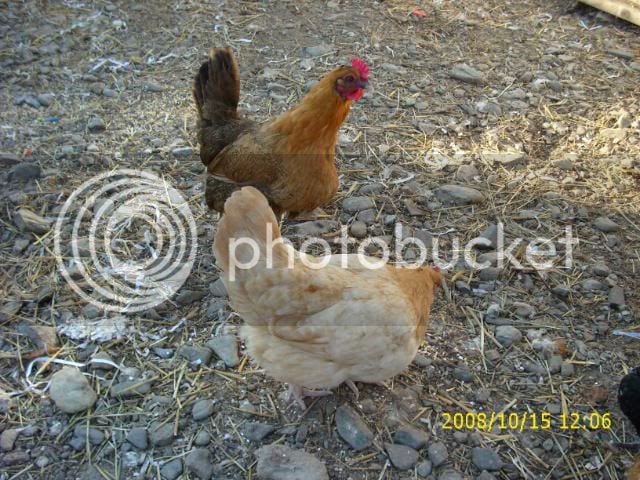 Another of the Buff Rock bantam hens and I'm not sure what the beauty is behind her, other than bantam and beautiful! 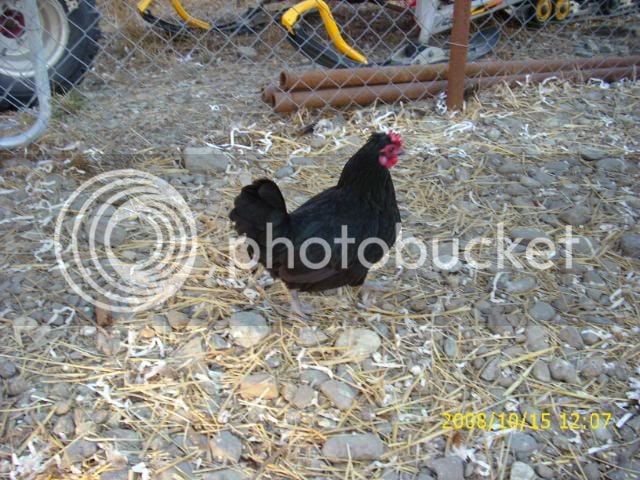 My only totally black bantam hen, what is she? She's got a prong horn comb. D'Anver?? 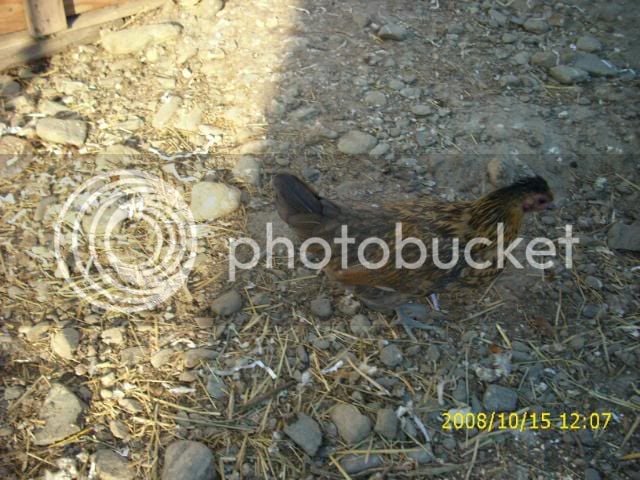 One of the chicks (pullet) that was hatched by one of the Buff Rock banty hens (They all sit on the eggs, lay a clutch together and sometimes there are two hens on one clutch) What is she, w/her hairdo, a Brabanter??? 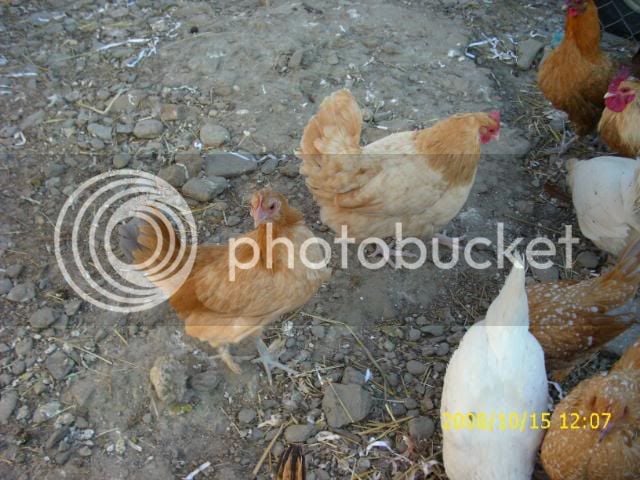 A Blue Buff little girl on the left is the chick hatched out by a speckled high haired bantam hen (I've got two of those speckled ladies w/the hairdo and can't remember the Dutch name now) One of the Buff Rock hens w/her, and on the left, top to bottom: the gold lace type hen, Cockadoodle, a Porcelain hen, the two Blue Buff D'Uccle chicks, and "Snow White" 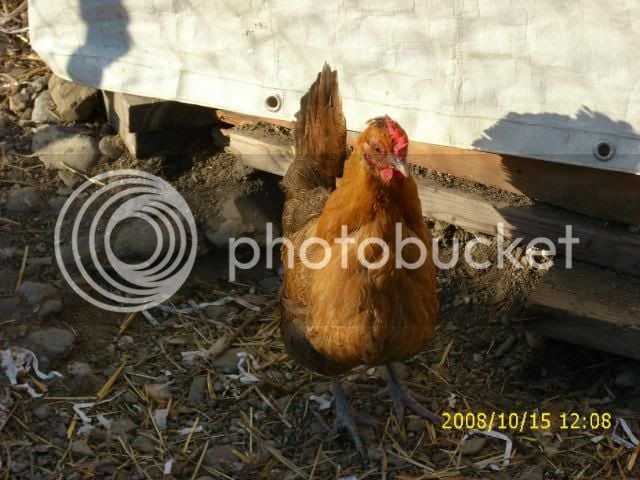 Pheasanty, lacy hen, what is she? 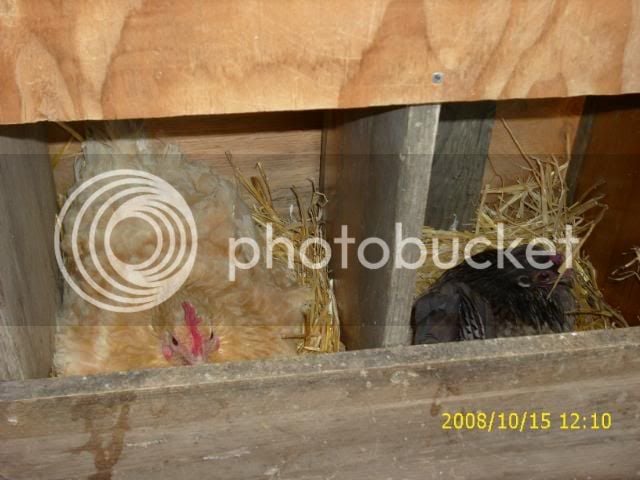 Buff Rock banty hen and one of the Blue something banty hen's sitting on Tori's Silkie eggs in the new coop. I moved their nests/nestboxes three days ago during lunch and thankfully, they are still determined to be good mama's! What are my Blue banty hens??? One has a single comb, the one in the box does not. 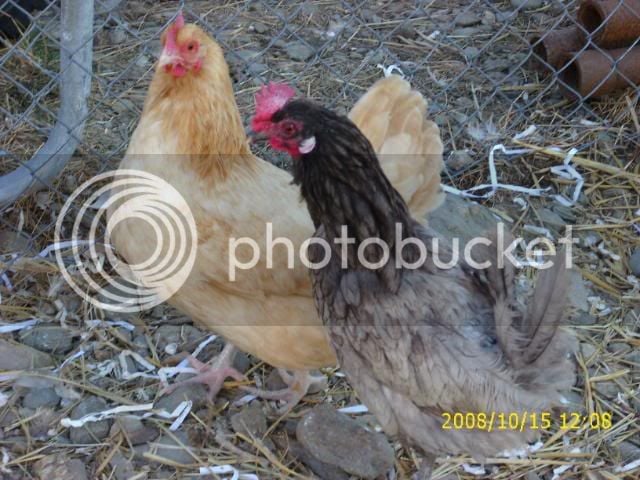 My other Blue banty hen, looking all tattered cause she wants those eggs/chicks, too! What are she and her sister? 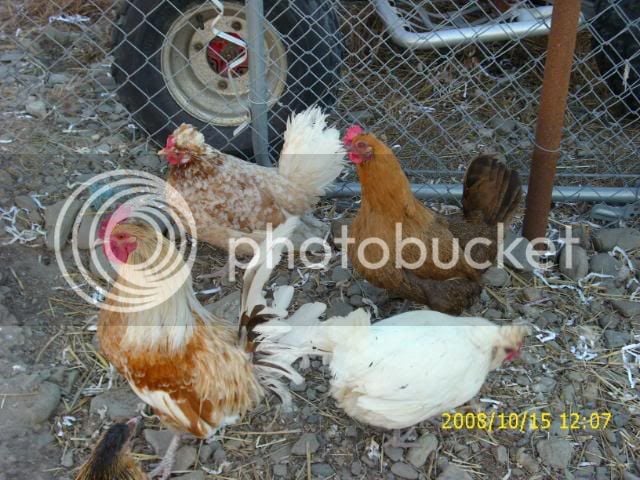 Cockadoodle, one of the two Speckled wildhaired hens, the lacy hen, the Porcelain hen and...
SAD... 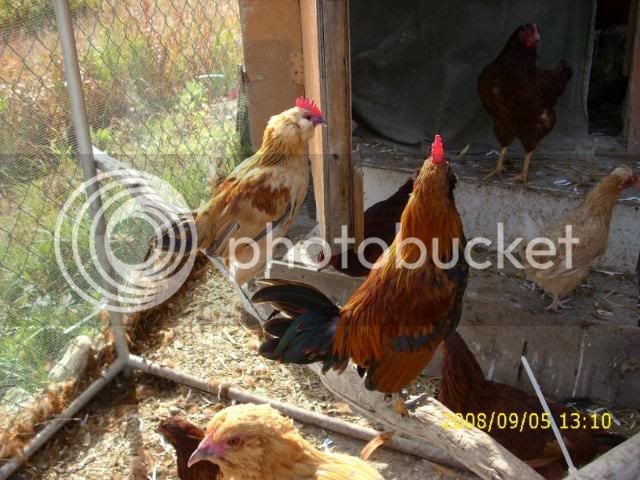 These two beautiful cockerels, I really and I mean REALLY regret having put the in the freezer, I was afraid they get beat up or at least Cinnamon (the darker) would get into it with Cockadoodle or Cockadoodle wouldn't allow them to live peacefully with his flock. Curry would have been a beautiful rooster someday, too, he was the survivor, not dominate...I wish I had kept them but even in separate cages would have been sad for them. They did have a wonderful summer...poor babes.

I'll try to get a pic of the beautiful bouquet tonight...leaving now to do so...of them on their perches.
Last edited: Oct 17, 2008

Nice pictures!!!! I am raising a pair of D'Uccles and i love to see others pics. Mine are 4 weeks and 6 weeks old and its fun watching the colors come in

I forgot a pic of "Snow White" so am driving home now...OH and here's the new insulated winter coop before I framed the window in: 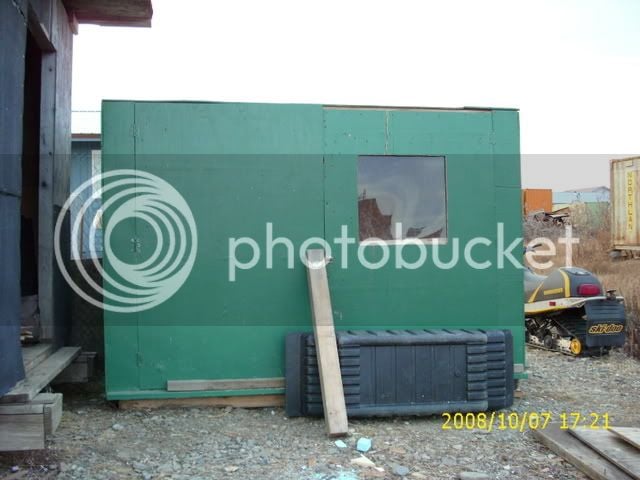 What beautiful flowers you have! Very nice job on your coop and run! Looks like a wonderful chicken garden!

wow! you have so many! the winter home looks cozy.

Is your lacy hen a nankin maybe??

I don't know what a nankin is, will have to look at feathersite

Thanks for the hint! Here's pics of them on the three rung perches and Snow White is the little white hen. Last winter she fell in a bucket of water, froze and her original owner came home, found her stiff and took her into the house to the bathroom where he plugged in a hair dryer and blew dry her, warming her at the same time and brought her back to life. He says she's raised many chicks. She's one of the first if not the first to come running to me when I go out to the pen now, talking away... 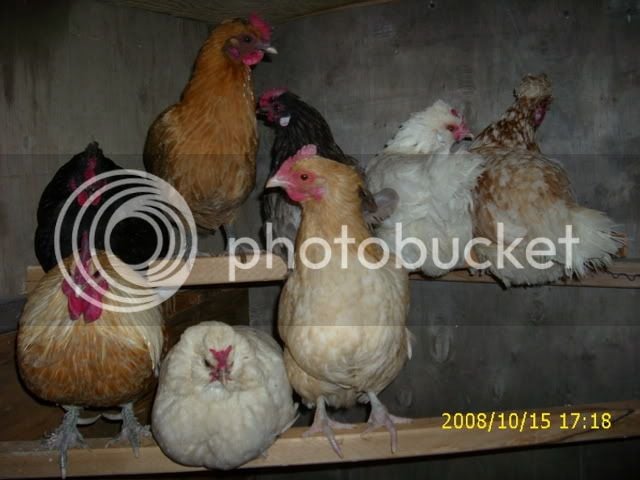 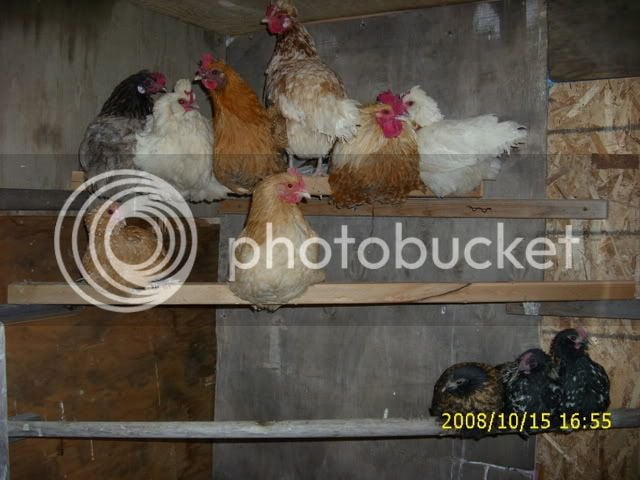 bottom right is the three youngest who are real characters, they own the world! 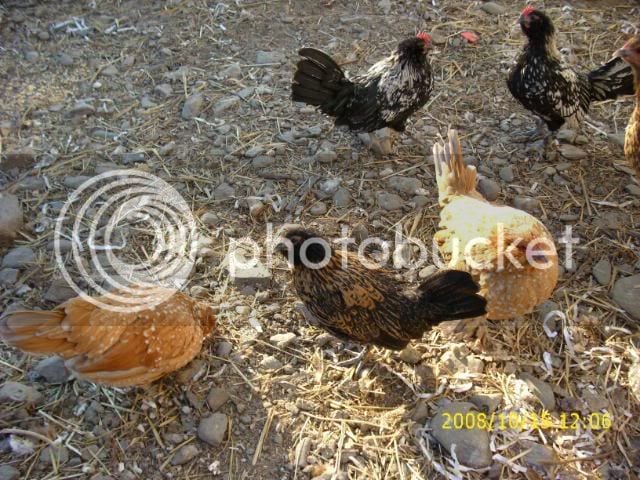 a closer pic of the three youngest, they are the darker ones, real pistols
I think of them as beautiful as flowers as most of the year our scenery is the exact opposite of Florida, rocks, sand, dust, nothing green or colorful unless you see our main colors as beauty which are blue of sky, grey/brown/dead grass yellow tundra, darker grey to purple of mountains and fluffy white clouds.

Okay you bantam or chicken experts, please tell me if I've truly got mutts or mostly and exactly what purebreds...HEY NY Red...come on and blast it to me!