We have had the boxer, Dixie, almost 4 years. For 2 years she had a buddy named Looter. He was Katrina rescue, died last year during hernia surgery. So we got her another buddy. His name is Logan and he is a redbone coonhound.
We weren't sure she would take to him, but I think she likes him pretty good.

We got Logan from a family that thought he was cute as a pup but kept him in a 10x10 kennel outside year round for 2 years. He had never been in a house. I think he's adapted pretty well, learned about couches and the queen sized bed pretty quick.

It took only 4 days for him to understand he goes outside to potty. 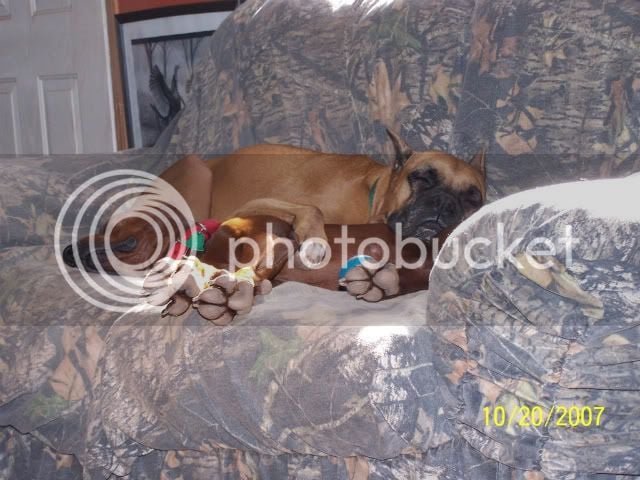 Oh how sweet! Good luck with Logan, Sherry! He and Dixie look so happy and conteted with each other in that pic.

PS- I totally agree with your sig! My life would so desolate without my dog and my chickens!

they are so cute together.

Aww i'm a sucker for a hound. My first dog was a Black and Tan Coonhound, then I had a Bloodhound, and now we're on Bloodhound #2. They make the best family pets if you're ready for the noise and stubbornness! They are just so affectionate and kind.