With all the new arrivals posted from everyone, I just had to post my new babies that were born today.

This is Patty, one of my Pot-Belly sows with her newborns. 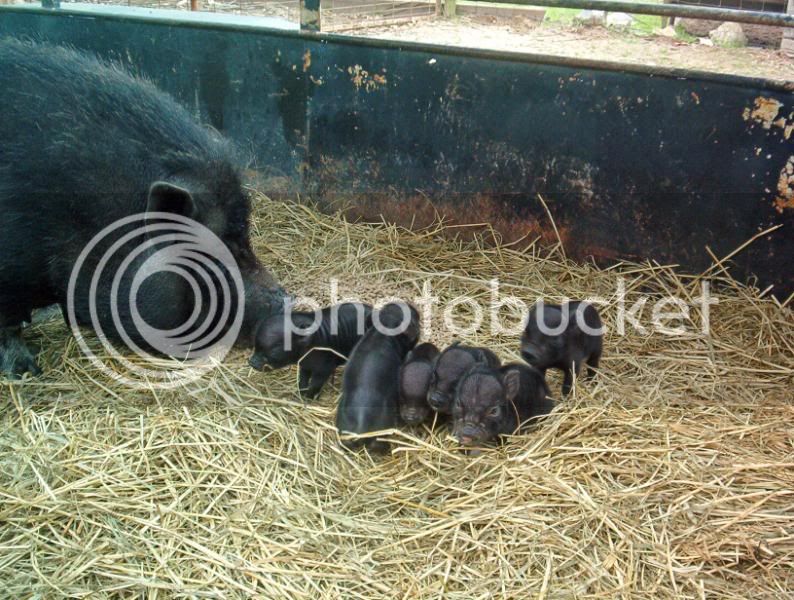 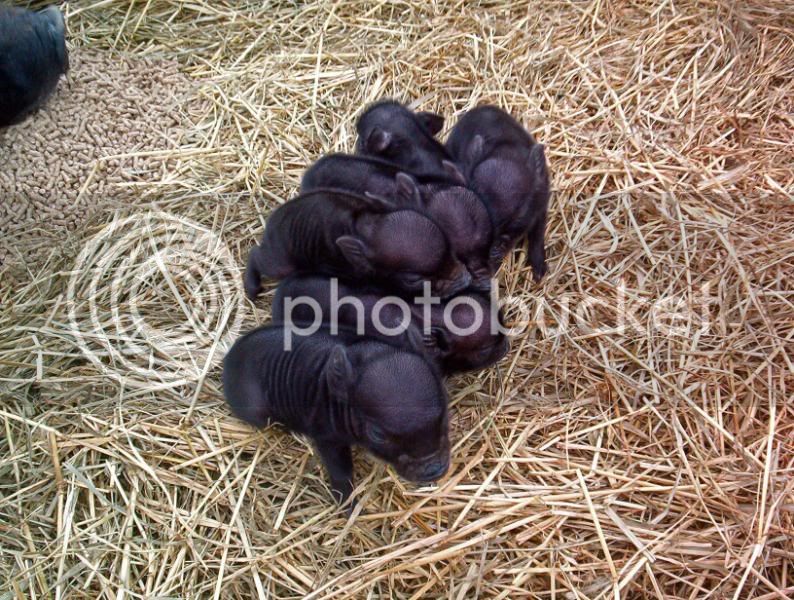 They are soooooooooo cute!

I think I just died from an overdose of cuteness, no joke.

I've wanted a house pot belly for ages... I'll have one eventually. Those babies are just the cutest things ever, I'm sure you love them. I'd love to just cuddle one!

I love pot bellys!
I just wish they didn't get so darned big. I would love to have a house pig, but not one that will get that big. Unfortunately, most of the smaller breeds aren't as nice as these guys.

Baby pigs are so cute!

There's just nothing cuter than a potbelly baby. We had a pb for several years.

Patty is the largest of my Pot-Belly pigs. She stands about 16 inches tall. She was grown when I got her & I know of three previous owners she had, so I figure she is at least 4 years old, since her last owner also had one of her daughters who had 1 litter of pigs. (We got the daughter too).
I am guessing that Patty weighs about 60 lbs.

She is as big as she will get (if I don't over-feed her)!
Her daughter, Buttons, is just a little over 13 inches tall, and the male, Spanky, is about 15 inches tall.
Buttons weighs about 40 lbs. and Spanky, weighs about 50 lb.

Patty will let me pet her only when I feed, and Buttons will not let me pet her at all. I'm amazes me she lets me in with her and the little pigs. The pics were not taken with a zoom lens, my camera's zoom is awful, so I have to get real close to get shots like these.

Patty will play ball with me. It's more like fetch.
Now, Spanky, since we raised him, is a different story. He will come when called, follow like a dog, and will fall over for me to rub his belly anytime I pet him.

The pigs pen runs along side the driveway and Spanky will get in the corner and run with the truck as we drive in.
He holds a grudge, too. He gets mad at DH when we have to give them a shot, so I let DH do the deed. Spanky will bark at him for days, and turn his back to DH when he goes into their pen. It is so funny to watch him.

I don't think I would want one in the house when full grown, but they have such personalities.

These babies will all be for sale.

Apr 5, 2022
proudpiggyfarm
P
A
Doe refuses to use nesting box