So I have been wanting turkey forever. I researched breeds and landed on the Narragansett. After months of searching for something local I finally gave up for now. Recently I had a pair of Black Spanish in the area that sold for a great price so I jumped on them. To my untrained turkey eye they look incredibly healthy. I suddenly realize I'm a little afraid (maybe more than a little) of "Steve" (my daughter named him and has NEVER given a name like that. Wth? Ha). His eyes are kind of cranky and he's huge. Now, I have seen a thousand turkeys and know they are big but I've never had one quite this close. Do toms always have kind of cranky eyes?

Tom's can be scary if you are familiar with them. Some do attack their keepers if the were raised improperly or they are just jerks. Tom's will display at you and follow you, but they should keep their distance, well to a turkey distance is about a foot or two.

Watch Steve around your daughter, hopefully they have a pen and run. Sit and watch them and become familiar with them which should help. You can also carry a walking stick around them for herding and directing them as well as to make you feel a bit more confident.

Turkeys do look at you, they are generally curious birds. As I've never had a Tom come after me I not familiar with any aggressive sign to look for. Just be confident and calm, and don't be afraid to move them away which is a dominant behavior.

Sure would love to see some pictures, I like blacks. The Narragansett that I had years ago were becoming too forward for my tastes and were butchered young, and in my experiences are more bold than other varieties, so I would prefer the blacks. 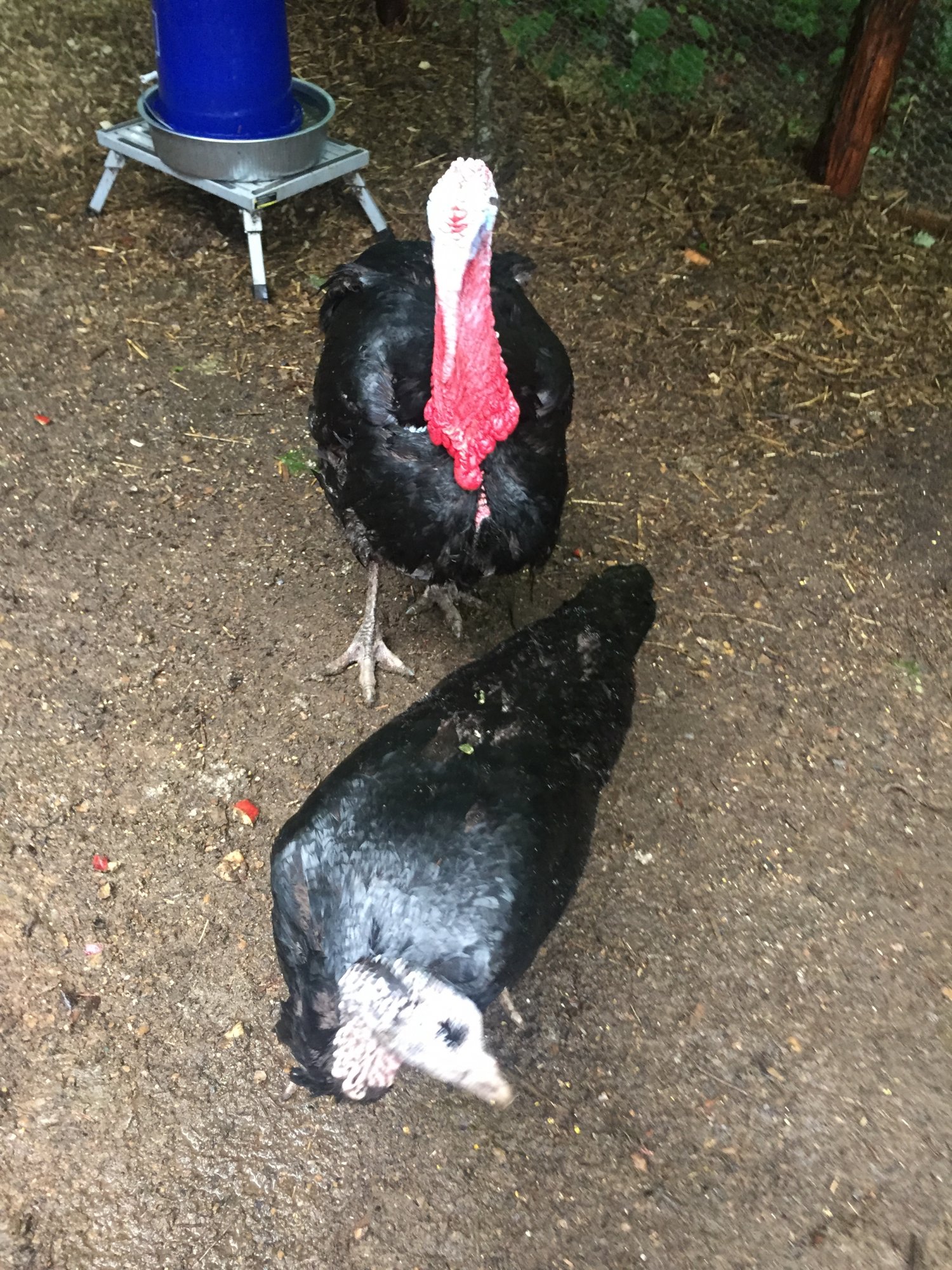 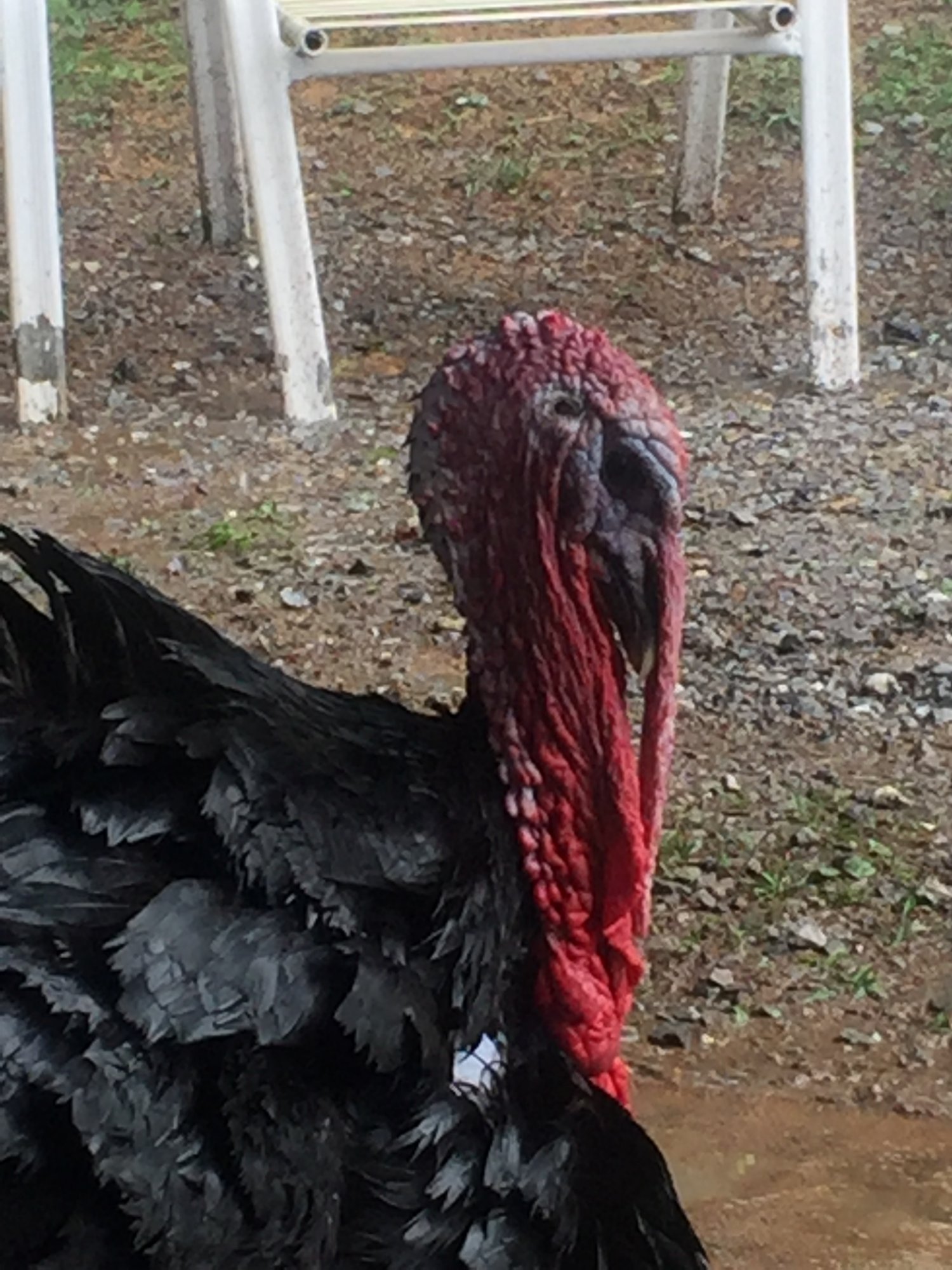 We have all been letting him know that we are boss. He quickly moves to the side for everyone, including out daughter so that's good. I'm just not used to these giant birds...ha. Ironically the only aggressive behavior I've seen was from the hen (not towards humans) but it shocked me. For some reason I assumed the hens were always pretty docile.

Hens can be the troublemakers out of the sexes. They are forward, pushy and loud, so watch they don't peck at your eyes or really anything shiny. Turkeys can be friendly to a fault, so don't be afraid of asking for that distance, otherwise they will be on you. Some people like that, I personally prefer my turkeys to respect me which isn't something they seem to know. They are big goofy birds.

Our Tom, Pretty boy, took a lot of getting used to. He's a one year old bourbon red and we got him about four months ago so he was good sized. I'd never been around a bird that large so I was very nervous. So far he's been a doll but his mate, cici, is a terror. She hisses any time I collect eggs or clean her house. She recently went broody and it took four of us to convince her to give it up after sitting on duds for weeks.

Nice looking birds..I have six young Spanish blacks, two month olds. Three Tom's, three hens. The Tom's already strutting their stuff. They seem to be very calm and loving.. I know two of the Tom's need to be removed pretty soon but they all seem to be getting along so far. My first choice when starting to raise turkeys were blue slate, I have five, Tom and four hens, after getting six blacks and six bourbon reds I think the blacks have become my favourites..they just seem to be so curious and more people friendly.. I hope they stay that way..my grand daughter loves spoiling them all, she sits in their yard, one by one will jump in her lap and want loving ( I told her this won't last forever as they get bigger) lol
She carries treats in an apron, they all know this..

Poult with dark and light gray spots? What color is this?

Why Did No One Tell Me…