(I hope! They shipped today/monday...)

I've got the brooder all set up and the waterer and feeder washed and air drying. The brooder heat lamp has been going since last night and we have the temp under the light stabilized at around 94 degrees Fahrenheit.

Although we've had two chickens (the youngest was 25 weeks and the other is several (at least 5 years) old) I am really nervous about this new batch. We just have the older chicken now and want a laying flock but have never raised chicks before.

The temp in the brooder's outer edges is almost 70 degrees (the brooder is 41 inches by 22 inches - we cut up and reassembled a bunch of cardboard boxes). It is out in the barn as we have 9 cats in the house and they would love nothing better than a chicken dinner and you can't go in and out of a room without at least one sneaking by. So now I'm freaking out about the temp and the height etc. The brooder is 16 inches high - can they get up that high when they're that young? We have about two inches of pine shavings in the box and I am putting paper towels down in the morning along with food and water before I go pick them up.

Any suggestions? Hubby and my dad both suggest directing light straight down so that they can huddle up there if cold, I originally had it spreading light over the whole thing by tilting it a bit. (In my version it wasn't directed straight down). Which is better? 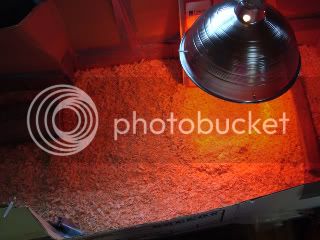 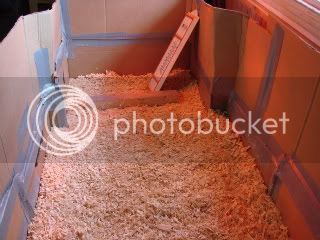 you have a nice setup.an youll enjoy brooding baby chicks.its so much fun to watch them grow.

Mine come tomorrow too (I hope)...My brooder light is a little too low I think. I'm pushing a little closer to 100.

Love the taped together boxes, we do the same thing, and add more as they run out of room, although we make different "rooms" by sitting a couple boxes along the side, and cut doorways in them, they have fun running in and out chasing each other.

Chicks in Garage— too cold?