Because this is the only place where people will understand what a big deal this is, I'm sharing pictures of the coop we just (almost) finished in our barn. Installed curtains on the nesting boxes today and was able to stand back for a look. It's taken a full year to get here!

Coop is 500 sq. feet inside barn built in 1832. We bought the property in February 2020, just before the pandemic hit. Creation of the coop involved taking down wooden walls, building a retaining wall, creating the 2x3 framework, hanging chicken wire across the ceiling, etc. My neighbor did most of the construction (I did a lot of the scut work

), and we designed it together as we went along. Much of the wood was milled on my neighbor's farm; the rest came from deconstruction of other portions of the barn.

A big shout out to two posters whose awesome designs inspired us: 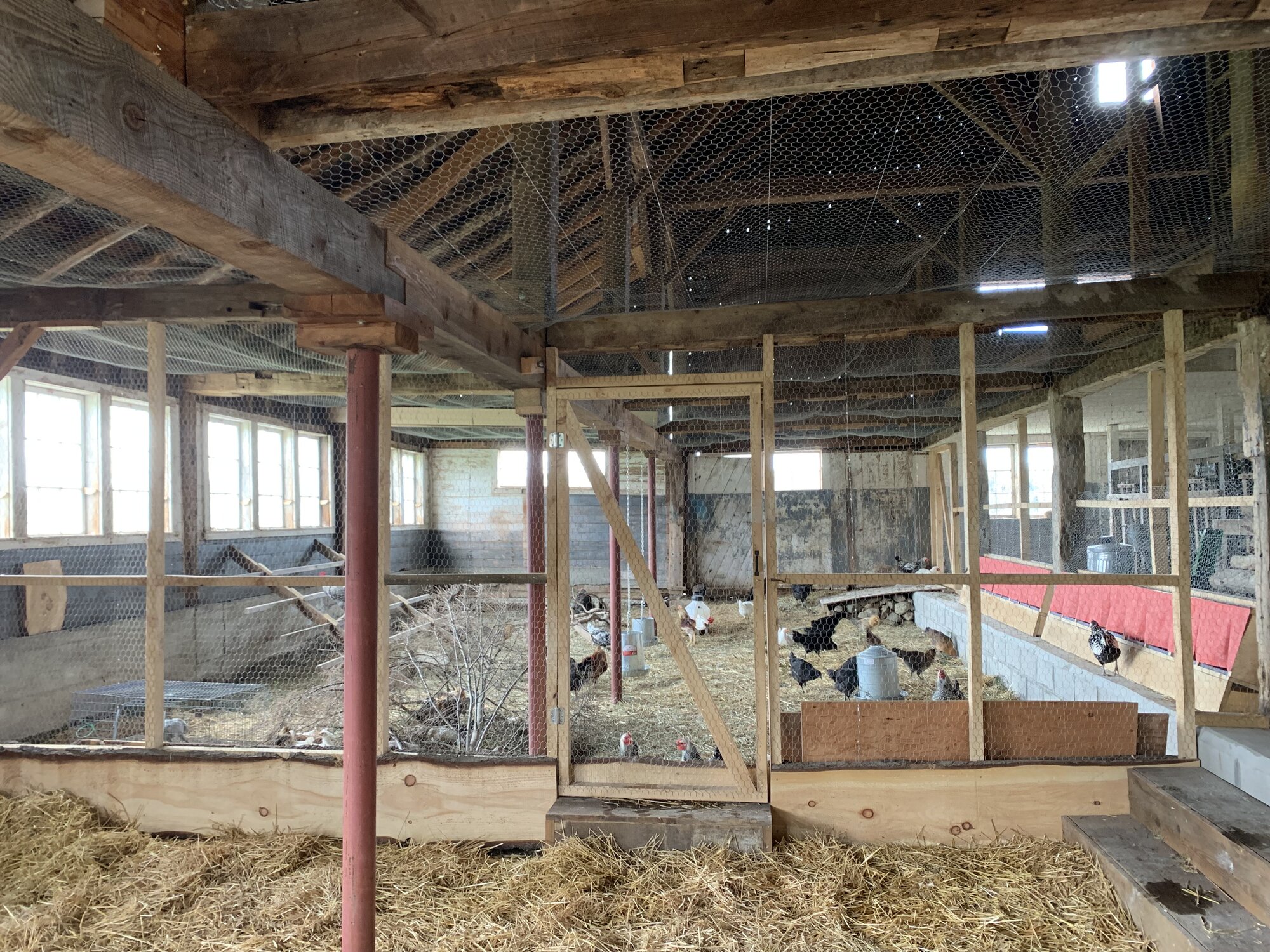 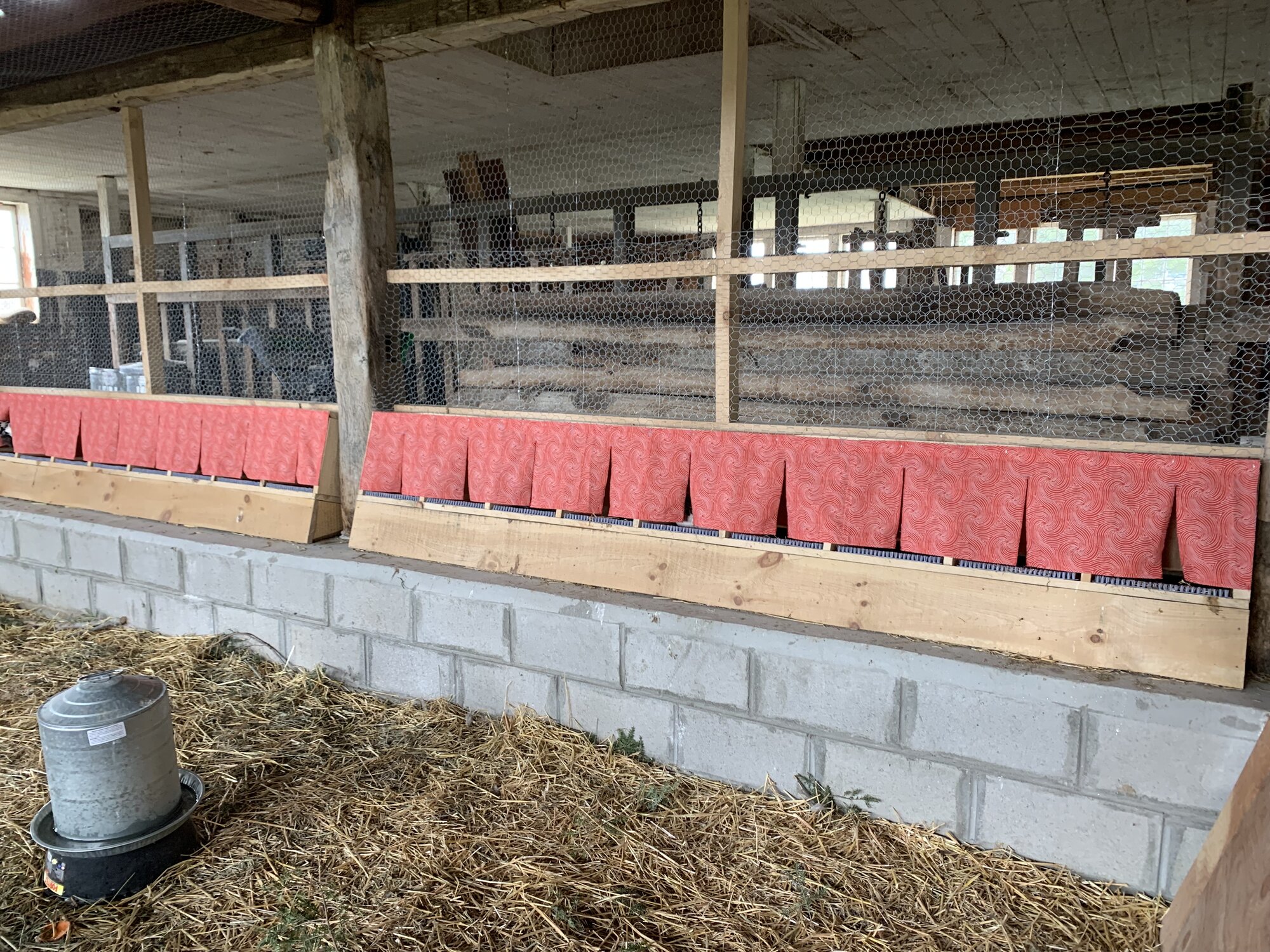 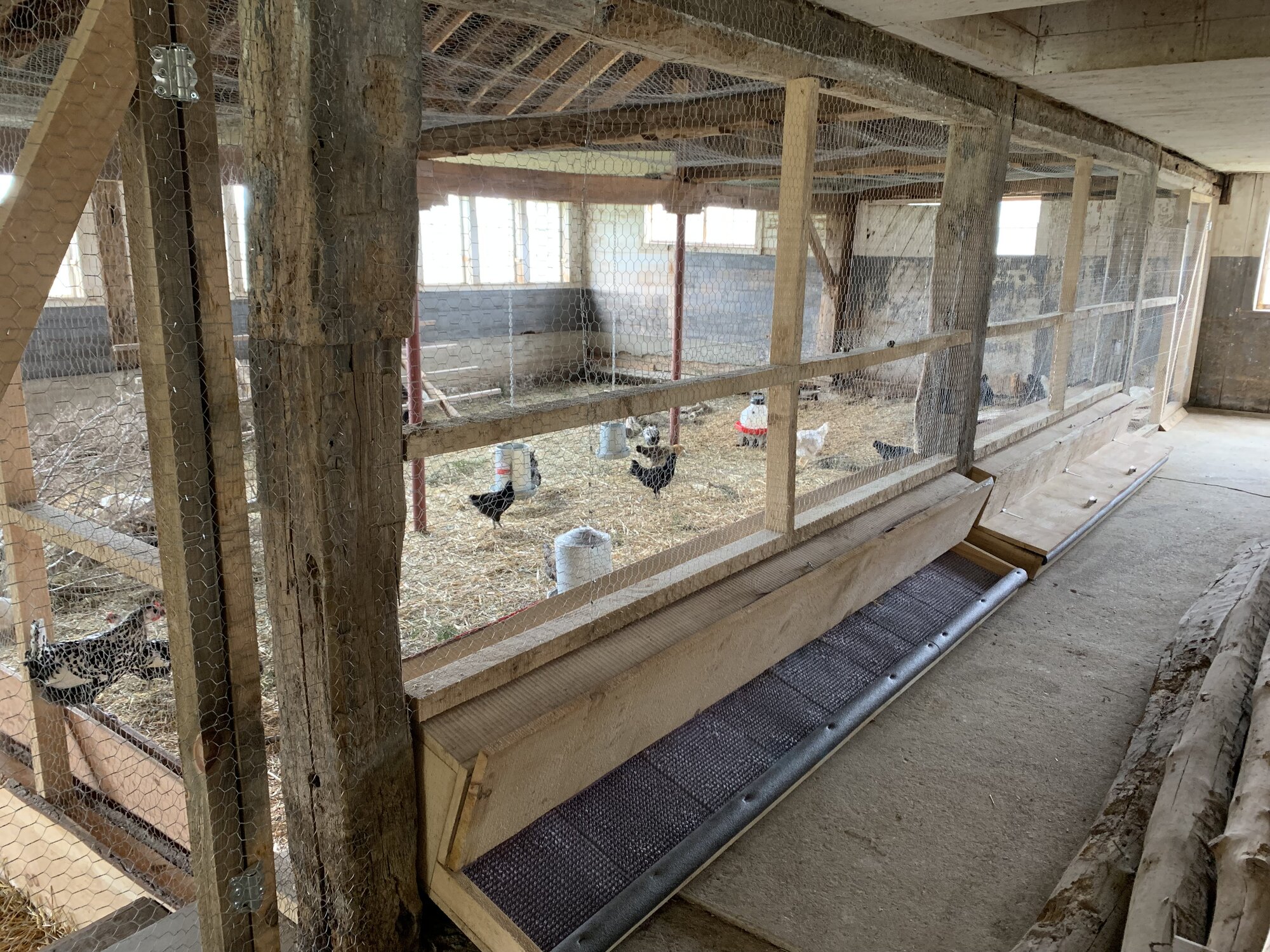 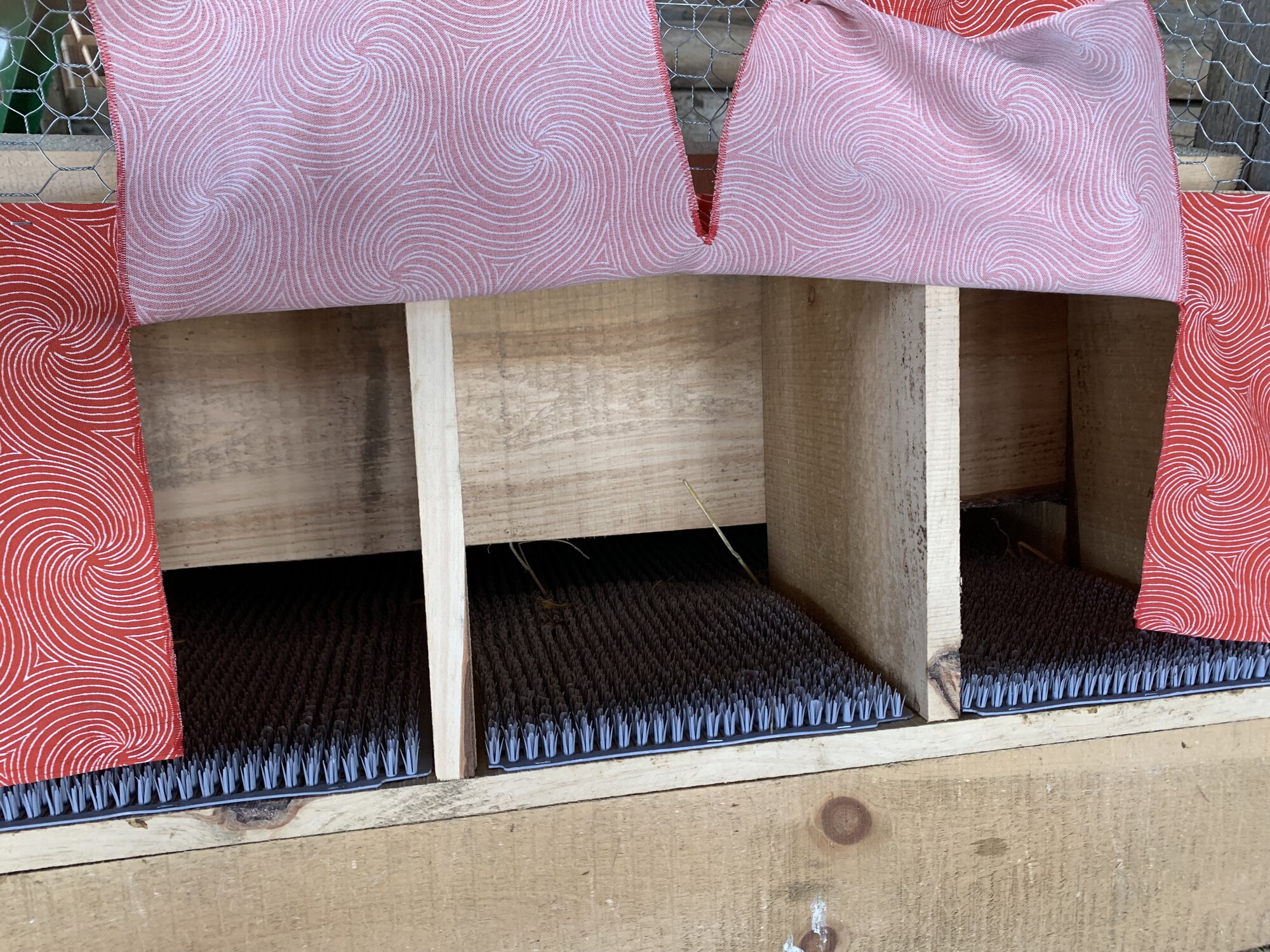 Rollout nesting box modifications:
No angled pieces creating the slant. We did keep the angle to 14 degrees.
Curtains have made all the difference! Birds were curious about the boxes, but until we installed the curtains, there were a lot of eggs being laid elsewhere...
Boxes sit on the cinder block wall, and the roll out portion is outside the coop, so I can collect eggs without entering the coop. 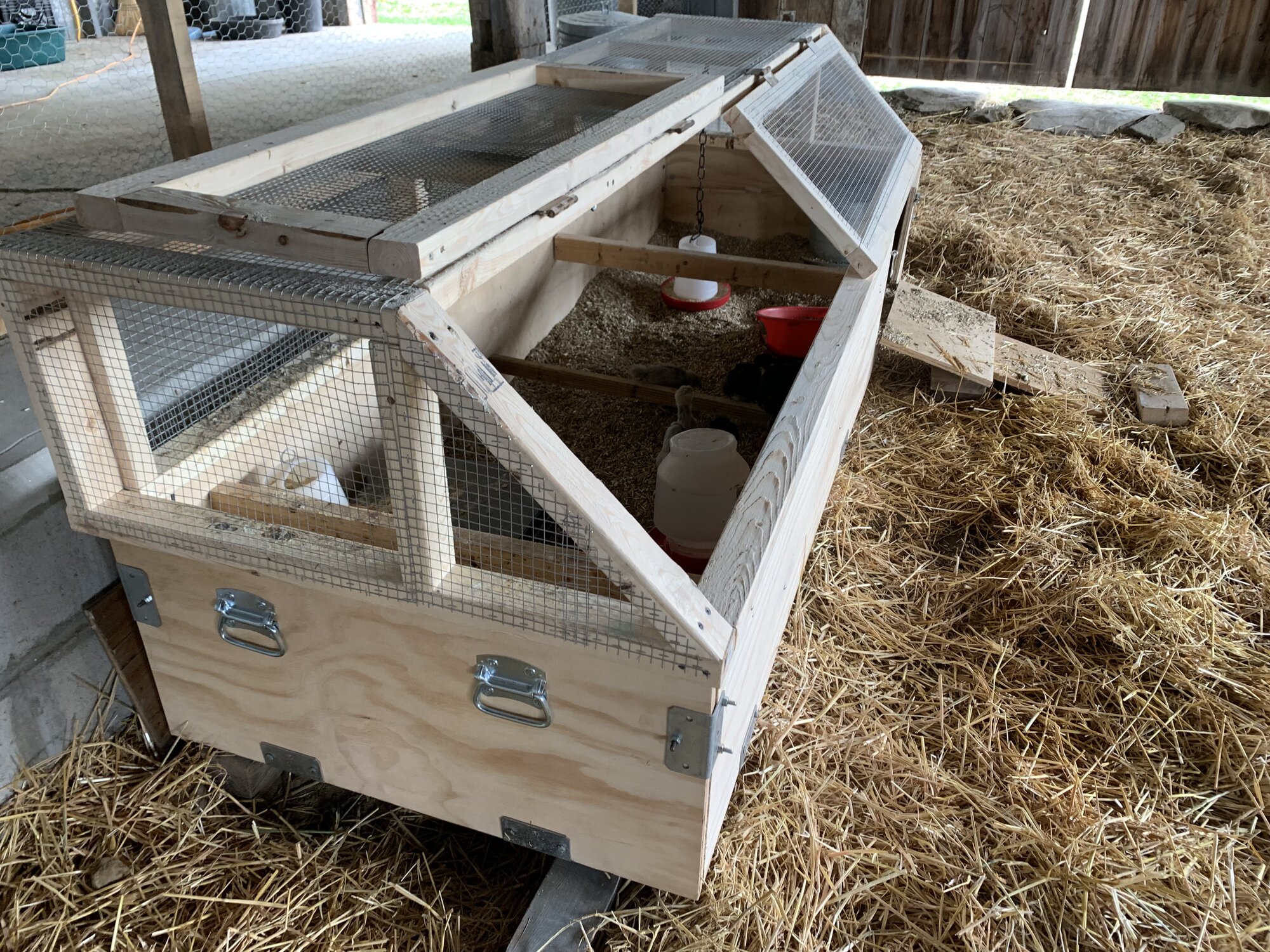 Brooder box modifications:
Box is held together with metal brackets and bolts so that I can take it apart for cleaning and moving. (I was SOOOOO happy to get this dusty mess out of our house!)
Two doors on top instead of one.
Multiple perches installed across width to give chicks a place to hang out. (These are screwed in and are easy enough to unscrew when disassembling the box.)
Entire top section simply rests on the base, no legs inside holding it up.
There's a door in the front (see upper right) that drops down to allow mama hens to take their chicks out for exploration.
You can't see it, but there's also a trap door in the floor to help with cleaning. When the box is on sawhorses (which it has been until the other day), I could just pop open the trap door and sweep out the dirty bedding into a bucket underneath. 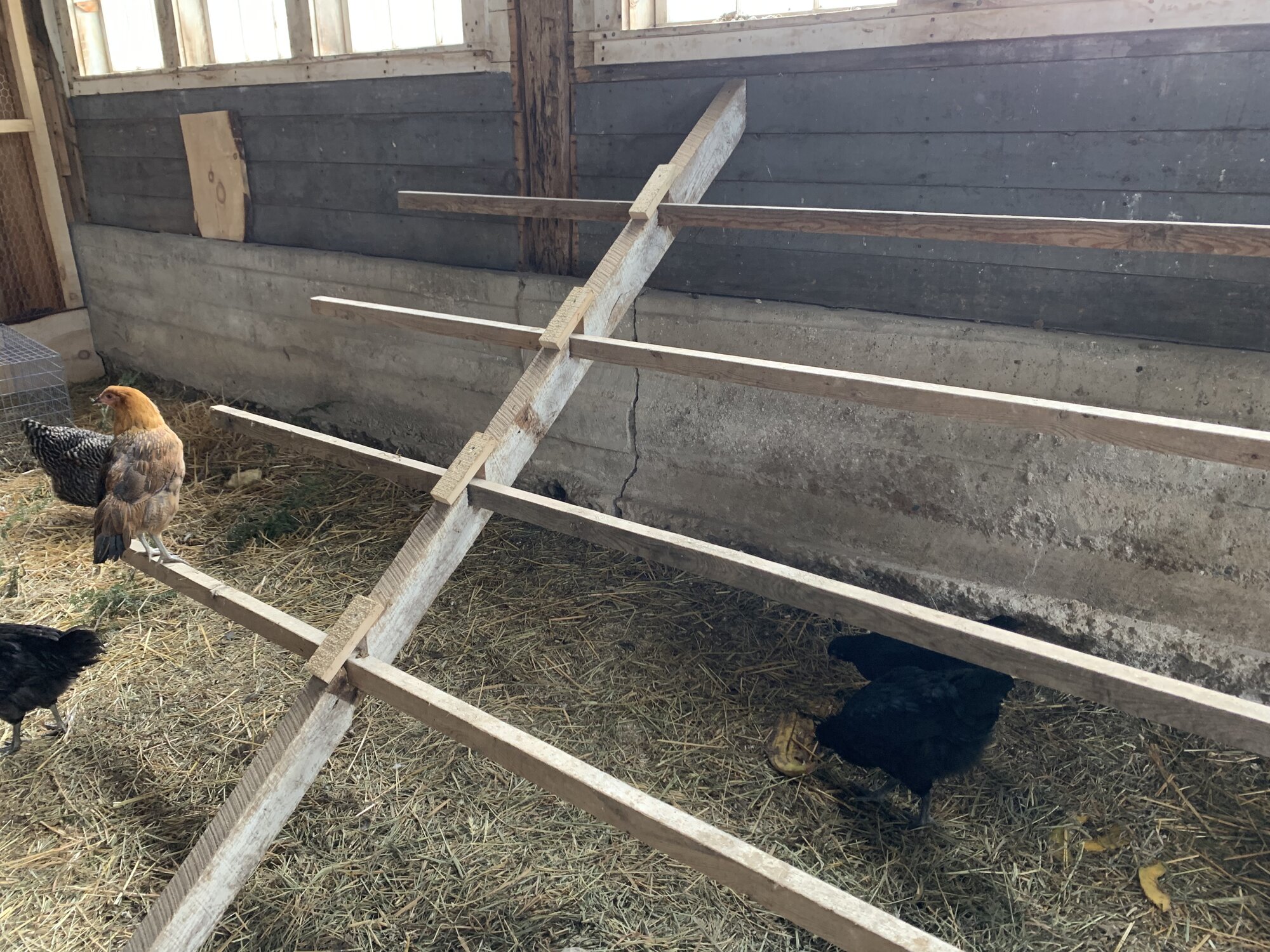 Removable perches:
The wooden blocks keeping each perch in place swivel, allowing the perches to be lifted out if we need access underneath.

While our chicken free range during the day, we've kept them in the coop this week to get used to things. Their door to the outside will be installed where the piece of wood is on the wall below. Yup, still need to make the ladder for them to get up to the door. 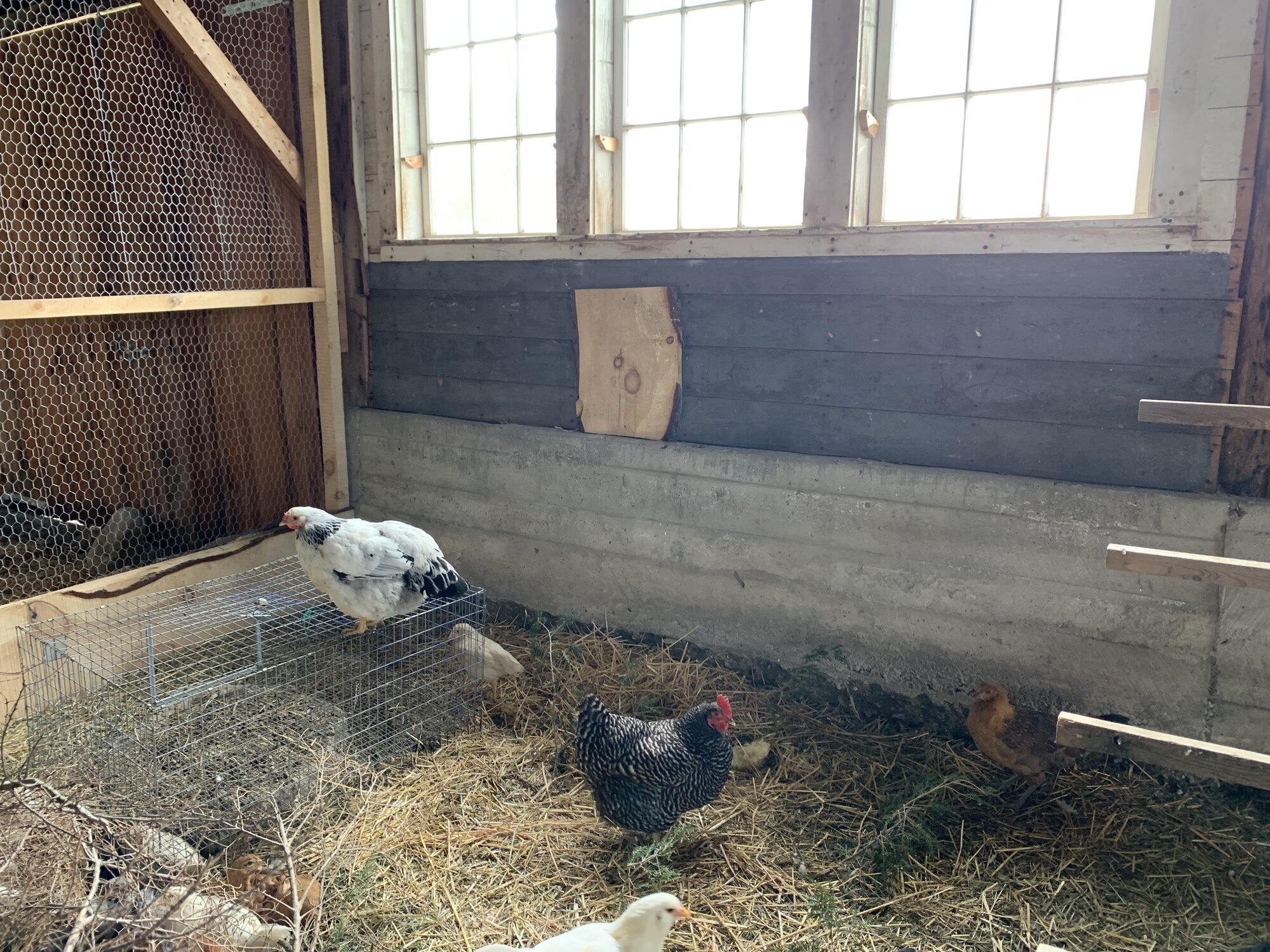 The bedding will be built up over time to a full 12". The floor is dirt, then old bedding from their temporary coops, plus wood shavings, hay, straw, hemlock boughs, and chopped hemp. Plus whatever compostable stuff we throw in. There will be a large box for dust bathing where the wire cage its in the picture above (plus they've created multiple dust baths in the yard).

It was quite a production the other night moving in three flocks from their prior homes on the property. So far, so good; everyone's getting along. Right now, there are about 20 hens laying eggs; that number will increase to about 90 by the early fall. Selling eggs won't be a money maker, but it's gotten our foot into the agricultural door, and it will be a draw for the small agritourism/retreat center we hope to open towards the end of the year.

Thank you for indulging me! I really appreciate having a place to share.
Patricia 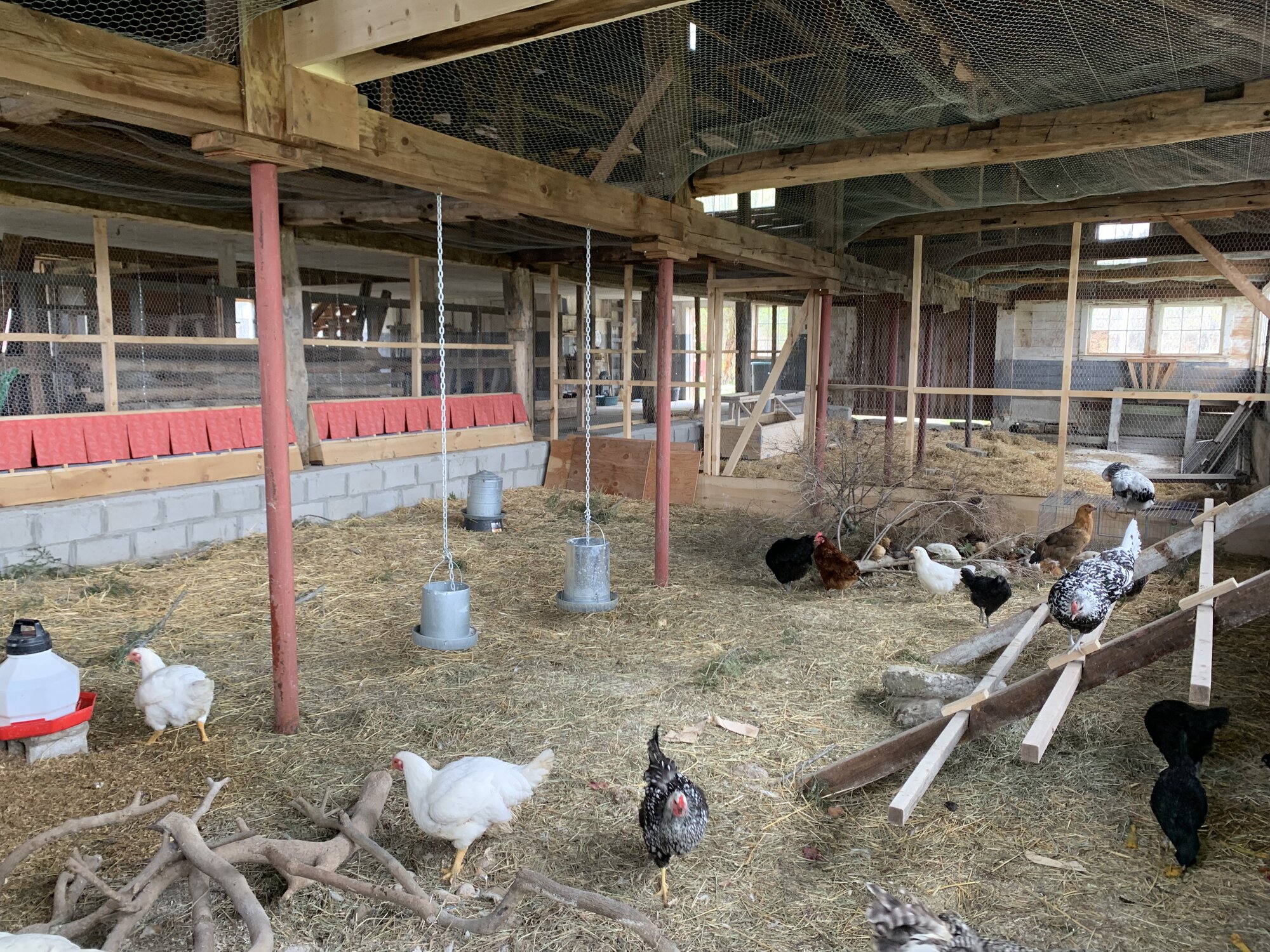 OMGoodness!!!
Look at that hand-hewn lumber!!! I understand your love of chickens and I hope you can make a go of the Agrotourism (going to add some goats & ponies???) I'm really interested in that too.

You've done a lovely job, but I'd have NO idea how to wrangle so many chickens when they start free-ranging LOL.

Thank you, everyone! I appreciate your kind words. What an adventure!
S

Wow. You will have very happy chickens. Excellent job.

So built the new coop
2