About a week and a half ago, I got 4 one-week-old female Buff Orpingtons from my local feed store. Last Friday I added 2 two-day-old Light Brahmas to the flock. That was the day I really started noticing that one of the Orps was developing slower than the others. She is smaller than the others, and has been getting her feathers slower. By now, she is QUITE a bit smaller and is starting to act a bit sickly. She is lethargic and spends a lot of her time away from the flock. She still will get up and eat and drink and peck around, but not the same as the others. She is almost as small as the Brahmas at this point, who are less than a week old!

I'm just wondering I guess what I should do. Do I need to worry about her having something that the others will get, or is it too late to worry about that? Or is it just that something's wrong with her making her not thrive that's not a disease? Do I separate her from the flock? Today I'm pretty convinced she's not going to make it much longer

Thanks for any input!

Here they were at 1 week old when we first got them. 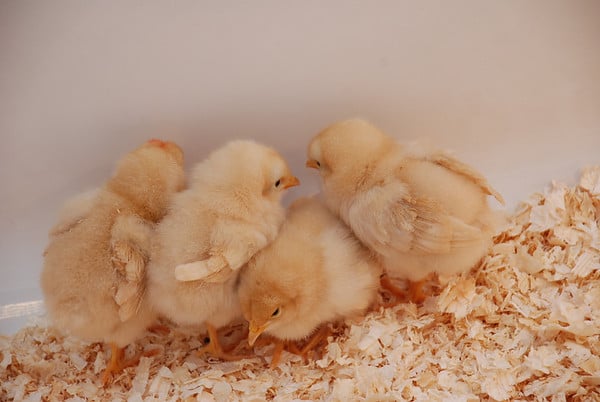 And here are the 2 Brahmas. 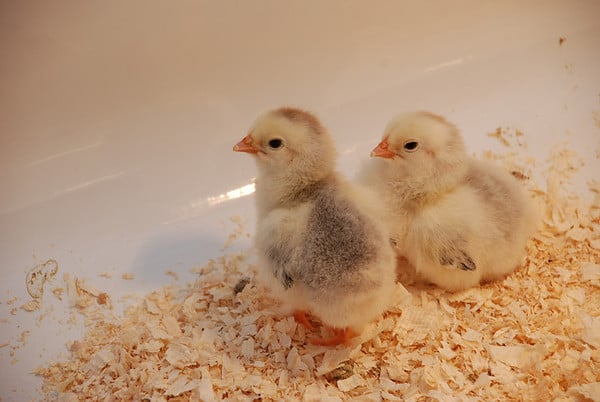 Here's the Buffs the day we got the Brahmas (last Friday). The small one is on the right but it's not very easy to tell. It's much more obvious now. The others have way more feathers coming in and the small one looks just the same. 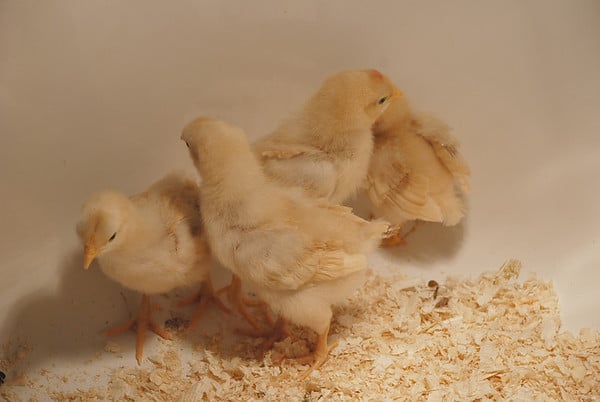 This shows the size difference between them as of today.

I would separate her if you are concerned she is not doing well. You may want to add a little organic apple cider vinegar into her waterer. Sometimes it helps the chicks immune system. The vinegar has to have "the mother" in it. It will say mother right on the front of the bottle so you will know what I mean. I don't know what size your waterer is but just search "apple cider vinegar" and plenty of info will pop up in this forum about it. The search button is on the top right. I hope she makes it.

contact your local feed store. what are you feeding them? I forget the name of it, but it goes in the water and it will pick the sickly ones right up in a few days.

One of my Dominiques was like that last week. I put her in a box of her own with a heat lamp, food and water. I started giving her some mashed hard-boiled egg with the chick starter feed (she loves the egg!). She has picked up a lot and is acting like a normal chick, although she is still a lot smaller than the rest. I've been putting her back with the bigger chicks for a bit a few times a day when I can watch them, and she seems to be doing ok. I suspect she was getting picked on and pushed out of the food/water because she's the smallest. She's still getting pushed about a bit, but she does get to eat (even if it is last in line) when she's with the others. I think she just got a slow start. Maybe yours is having the same thing going on?

She doesn't appear to be getting picked on, and is able to eat and drink without getting pushed out of the way. I really don't know what's going on. Yesterday she did seem like she really wasn't feeling well (was over against the side of the brooder kind of sleeping for most of the time while the others were wandering around) but then she got up and stretched and ate and drank some. Today she seems to be a bit perkier, maybe? Just small. I don't even know if she's grown at all since we got her! If she has, it's not much. Maybe I'll try giving her some ground up hard boiled egg. We're just feeding all of them normal chick food at this point (I'm not even sure what kind or anything, the feed store just gave me an unmarked bag full of it...it's little tiny brown pellets. Pretty sure it's just standard chick starter feed). The feed store gave me some chicken scratch too and said to mix that in for the first couple weeks to help "regulate" them, which I did, but I've stopped that now.
Last edited: Jun 3, 2010

I have a chick like that as well. They are all 11 days old but she simply doesn't look like it. I spent a lot of time babysitting her and watching her carefully. She does seem to sleep a bit more than the rest of the flock but other than that, she seems entirely healthy. The things I watched for were her BM's to see if there was either constipation or diarreha, of which there was neither. I watched for any mucus or fluids from the nose or the eyes. She seemed perfectly fine other than the sleeping. She's back in with her siblings now and is getting along fine. Perhaps some chickens are just smaller than their peers? She also has one of the biggest personalities of all of them. *laughs* I admit, she's one of my favorites and I'm considering naming her Miss Diva!

Is there a way possible to weigh your chick on a regular bases and start a growth chart for her? Perhaps you could compare her weight to another chick her age and see if the percentage of weight gain is similar? I'm a complete newb so I doubt this helps but I hope it does nonetheless.

i swear i have a dawf chicken she was like that on about a year ago... There year olds and her name is shorty! LOL Shes soooo much storter than the others! But shes my rooroo's fav. high in the pecking order... she's so bossy because of her shortness i give her every thing she wants all she has to do is give me that hello may i have a bug,or some scrach,or a scrambled egg...

I bought 2 cochins my first chickens. They were the same size when i got them. Now one has almost all her feathers "Flower". Dino my sons ckn is the other one. She is half the size of flower and has half the feathers she has. Dino has always acted fine, and always ate and drank fine. But dino had pasty but for a couple of weeks before i knew i needed to do something about it. I cleaned dino up and she never had that prob again but since then has always been half the size of flower. I dont know if that stunted its growth but dino has never acted sickly.

I have a small chick in a batch of week-old gold sexlinks...she seems to be doing fine; in fact, she's the first one to the feeder when I fill it up. I would kinda like to pull her out and give her some extra grub, but so far I have just been keeping the others away and letting her have a little extra time eating before they do.

B
First time outside and now more questions!