My name is Michelle. Or Pak Rat, because I so am.
I'm 26 and live in Washington, US. Not DC, but the great soggy northwest.

I grew up in a family that raised lots of chickens, and ducks and geese. I had a rooster growing up who was one of the sweetest creatures I've ever known. I also had a turkey, and since then I believe turkeys are among the best human companions on the planet. I thought ducks were cute, but they ranked last on my list of "farmyard favorites," so here's my little adventure...

Two little duckies! Well, not so little anymore. They're both about eight months old now. My girls are Marchesa the Khaki Campbell and Lilikoi the Welsh Harlequin. They live in the house with me! They have their own fully furnished duck room, and when they have diapers on, roam the home with my dog Toboe and my cat Kaydith, and occasionally the bearded dragon Milady. It's a very animal-friendly place, and yes, everybody gets along.

It's been a fun challenge to have indoor ducks, requiring constant troubleshooting and experimentation (and adaptability and budgeting), but it's getting easier and more enjoyable all the time.

I found BYC while doing research. It's one of my favorite resources, even though I just very recently joined. I'm really excited to be here!

Thanks for having me!
~Luvducks~

Glad you are here!

Welcome Michelle! It’s great to have you here on BYC! 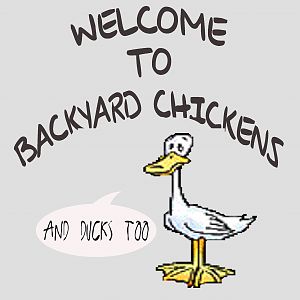 Hi Michelle, it's nice to have you here! Thanks for joining us, make yourself at home.

Welcome to our FUNomenal community! Best wishes and have lots of fun!

Hello Michelle and welcome to BYC!