I got four new Ringnecks yesterday at the auction, to keep my lonely "male" company, after his mate got taken by a predator when they freeranged.

I think I have two males, and two females, my guy looks just like the two I think are males, as all three coo 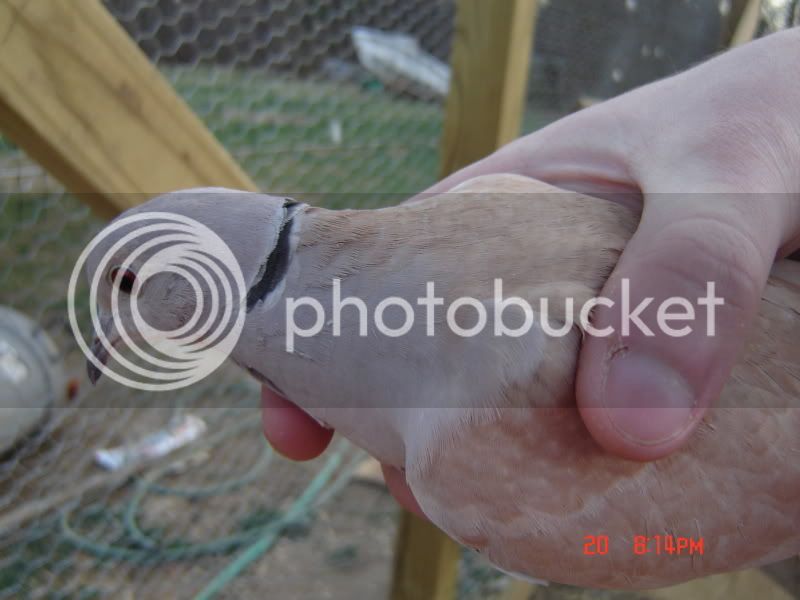 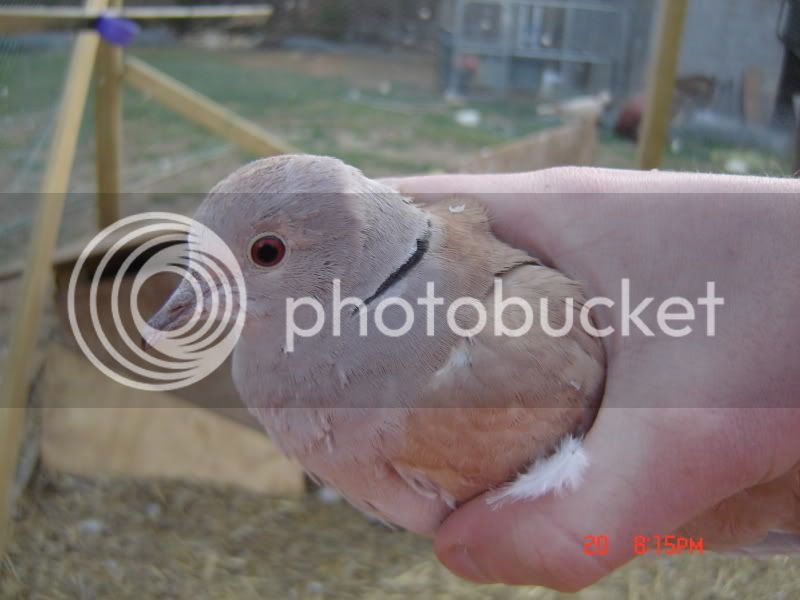 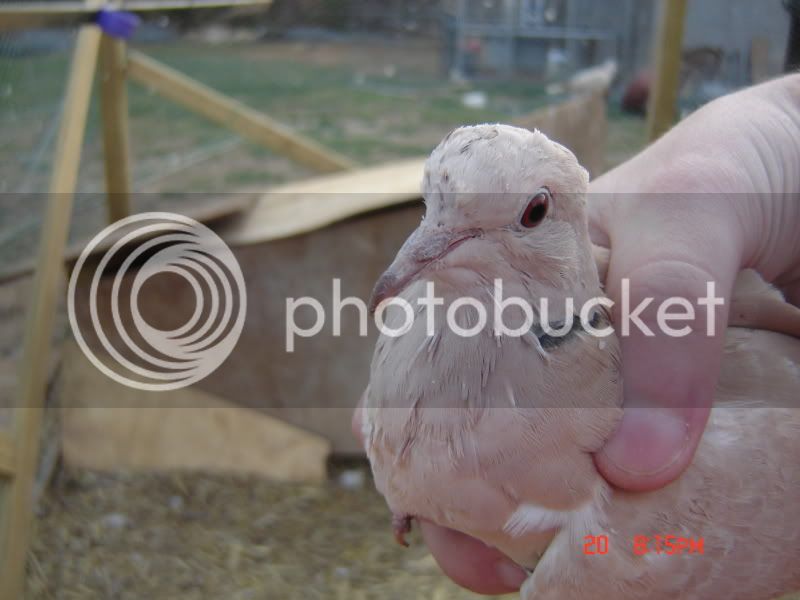 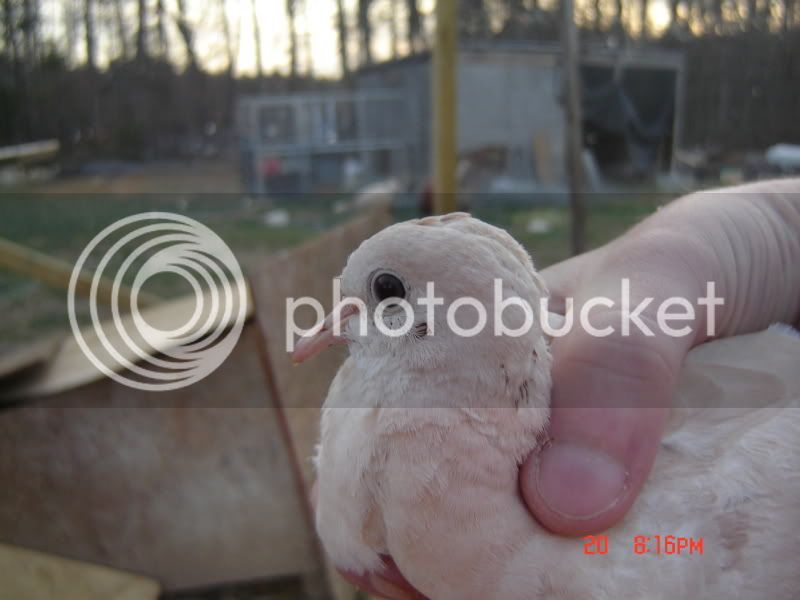 heres my guy with three of his buddies, he's the one with his head up, he was watching the surroundings, as well as the sky while the others ate, is that normal? 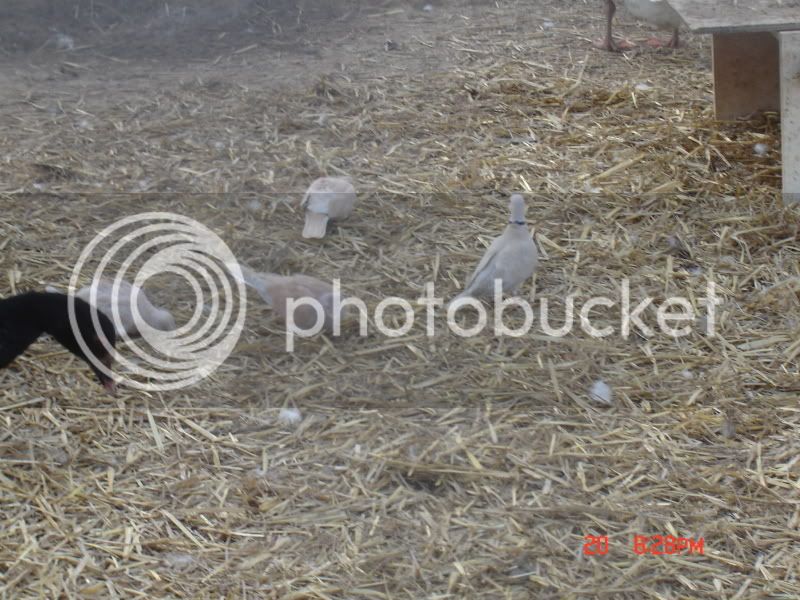 Squeaks checking everything out 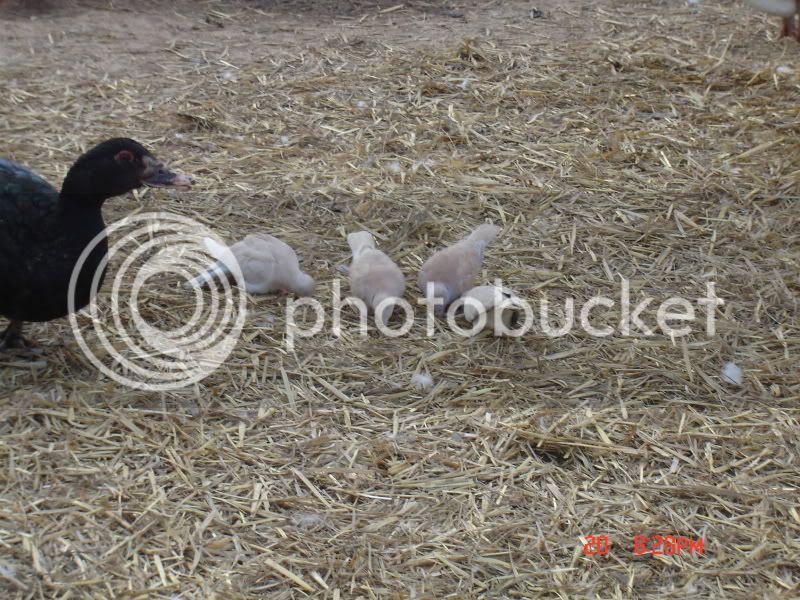 Wow they look nice, i have the same breed of doves too their nice birds to keep. Great pics, thats a nice flight pen you got for them, i like how you have straw at the bottom of their pen its looks great!! Wish i could have a nice setup like that.
Enjoy them

yup, the original pair lived in a big cage in our room, but I wanted something bigger, so out to the duck pen they went, then the male got out somehow, his mate followed, they lived around the house, and ate out of thier bowl in a tree, they even went over to the nieghbors to eat, then about 2 or so weeks ago, I stopped seeing the female, only the male was coming around, and I havn't seen her since, the male is now permanently in the duck pen with his buddies,no more free ranging for him!

he looks happier than I've seen him look for weeks!

andddd, he's already got eyes for one of the girls too

I have read you can tell by beaks pink girl black boy for this breed of dove... What I would like to know is how to tell with white doves? LOL

Quote:
well, then if thats the case, then I've now got three males and two females, yay

I am hoping a couple will pair up, and make lots of babies LMAO

The females are quite young, the last one still has no feathers coming down on beak, you got really lucky getting young birds! Best of luck with mating! Hope you get lots and lots and lots of hatches!

If any get loose around here, they don't stick around but for a day or two and then they're off. Greener pastures or hawk food, I dunno.

So....why does anybody keep doves anyways? I think their cooing is pretty neat, but I have to constantly purge the excesses or it gets way too loud.

As far as sexing them, I've never read of any easy way to differentiate. I figure I'll get some leg bands and observe them to see who pairs up and then band them at night.

the cooing is quite pretty, one of the males has a two-sylible type song

, he goes "coo-coo coooo" instead of the typical one sylible song, the other two have.

they are very fun to watch too, I witnessed one of the new males trying to mate yesterday, but it was with my male O_O, maybe he got confizzed, or my "male" is a female,but he coos?, so odd

Doves are such pretty little things! Congrats on your new birds! I'll bet he feels better having some company