Hey!i would like your guys opinions.what are thebest family kittens?any size,and color.the hair short to meduim.

One of the best cats I've ever had jumped into my car at the co-op one day when I went to get feed. I'm guessing he'd be called a domestic shorthair, I don't know. He's almost a blue color (like a light Russian Blue) with cream under his chin and a little on his chest and some faint Tabby stripes. He's an amazing mouser and a bit of a weirdo. He loves cracked corn, I'm assuming since that was a main part of his diet at the co-op while he was fending for himself? And he likes to hop up on my shoulder and ride around while I'm out doing chores.
I think the best breed of cat is one you can rescue and give a good home to. All of our cats have been rescues, and they all have seemed grateful. Well, at least as grateful as a cat can be

My cat is a Russian blue named melody. She is awesome. I got from our humane society and I live her to pieces!
-Liv

I love tabbies, Manx, and siameses.

We have a Lynx Point Siamese and he's' the best cat I've ever had - all the Lynx point Siamese I've had, have been great with other animals, kids, and even the same gender cats. 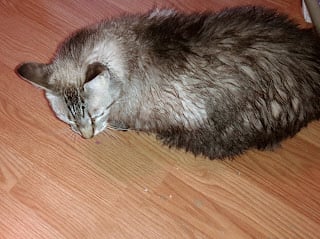 (this is him after getting his nails trimmed, and a bath.)

He goes limp when I bathe him and doesn't viciously attack you like some other breeeds (and ALL my male lynx point siamese i've had over the years, have had a similar attitude about nail trims and bathing.) 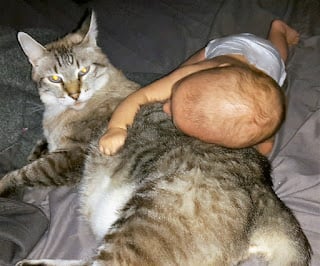 He's great with babies of all species. And will come find me and howl at me if the baby is crying and I walk into another room. He's' a good "daddy" cat.

He's also lazy, and fat - we put him on a diet and he started getting into the trash and dog food... The other lynx point siamese I've had, aren't as into food as he is - but he was a rescue I got between 6-9 months old and he'd been nearly starved as a kitten - so his being fat now has a lot to do with that. (He's still on a diet and is still over 25lbs. Lynx point siamese average 8-16 lbs... He just is an over achiever. Even if I slimmed up way up, he's be closer to 20lbs.)

I'm a fan of big cats that kids can hug and if you trip over them you don't hurt them.

I'm a big fan of Ragdoll cats. I've met a few over the years and they are very nice, don't usually shed that much, and great family cats.

I would avoid long/medium haired breeds if you have a family, it is hard to find time to brush them and as much as you think you'll have time its one thing less to think about. Good luck
S

I think ragamuffins are good family breeds although, they are fluffy so hair might be a problem... I don't know much about cats, I only have dogs.

cats hate each other?
2

B
For cat lovers