I have a 25-week old Crested Cream Legbar that is part of a mixed flock of 4 girls that were raised together. She's been doing the submissive squat for at least a month but hasn't laid an egg. She's also a loner and not as active as the other girls. For example, she's been sitting in my lap for the last hour while the other girls run around the yard. Two of the other girls (Silverudd's Blue & Olive Egger) are laying consistently and the third (the youngest, Buff Orp) seems about to start.

She's not being picked on and appears healthy. A couple of weeks ago she was acting "down." I thought maybe she was egg bound so I brought her inside for an Epsom salt soak and lubed her up with petroleum jelly. She perked up after a couple days. I'm afraid she is "down" again, hence the sitting in my lap while her sisters run around eating everything.

I feed a layer feed. Probably too many treats but it's mealworms, a bird seed mix, & they love cheese. They free range 1-3 hours a day. I just ordered some oyster shell in case it's a calcium deficiency. 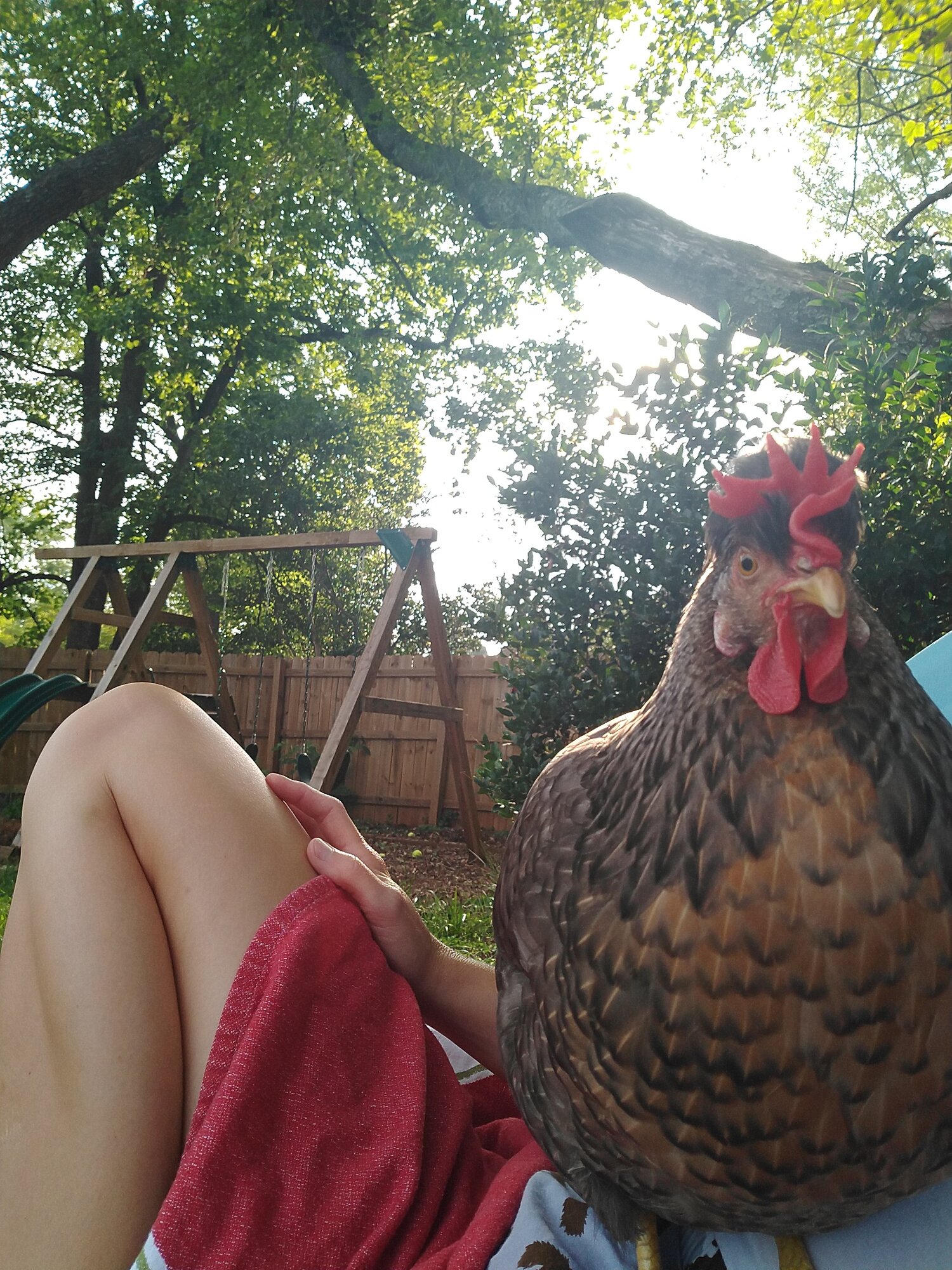 Well she looks as healthy as can be. Looks can be deceiving though. Have you looked for a hidden nest?
G

That picture was a week ago. This is her this morning. She's been kinda sleeping on me for an hour. I've thought about a hidden nest but haven't really looked for it other than glancing in their favorite bush. They don't free range at the same time everyday, if that makes a difference. 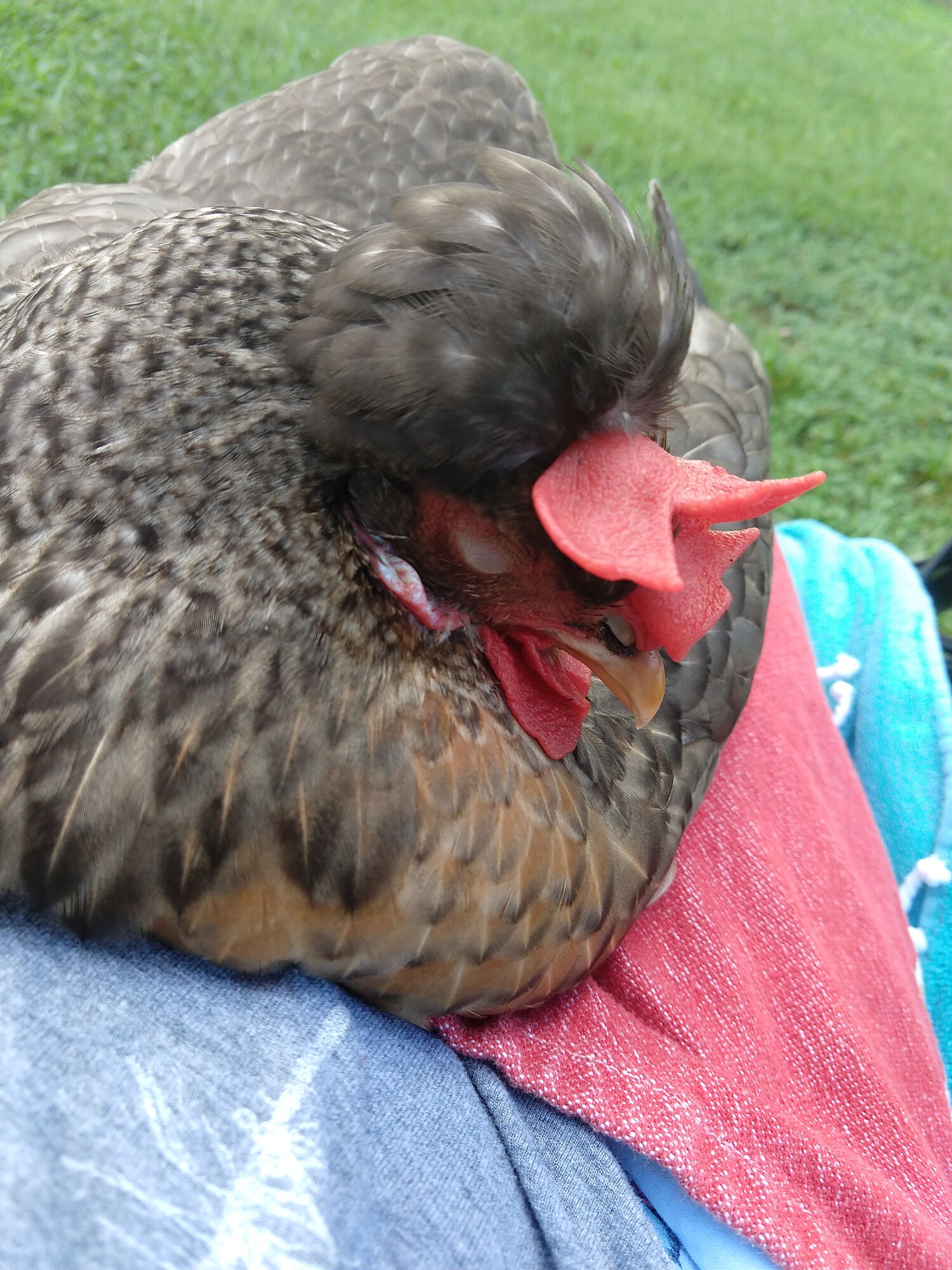 girloscruff said:
I feed a layer feed. Probably too many treats but it's mealworms, a bird seed mix, & they love cheese.
Click to expand...

I would cut out the treats, except the meal worms.
Have you checked her pelvic point spacing?

When I have a bird that is acting 'off'...
I isolate bird in a wire cage within the coop for a day or two....so you can closely monitor their intake of food and water, crop function(checking at night and in morning before providing more feed), and their poops. Feel their abdomen, from below vent to between legs, for squishy or hard swelling.

Best to put crate right in coop or run so bird is still 'with' the flock.
I like to use a fold-able wire dog crate (24"L x 18"W x 21"H) with smaller mesh(1x2) on bottom of crate under tray.
Then you can put tray underneath crate to better observe droppings without it being stepped in. If smaller mesh is carefully installed, tray can still be used inside crate.
G

Thanks for the detailed reply. I am going to call the vet tomorrow to ask if they'll run a fecal test for coccidia. Unfortunately the closest chicken vet is 1.5 hrs away so fingers crossed the regular vet will take my money, lol. Would it be terrible to just blindly treat them all for coccidia?

I have not found an outdoor cache of blue eggs but she's been doing the egg-squat longer than my other 3 that are laying. For the most part she looks ok but something just seems off about her. She's super sweet though.

girloscruff said:
I am going to call the vet tomorrow to ask if they'll run a fecal test for coccidia. Unfortunately the closest chicken vet is 1.5 hrs away so fingers crossed the regular vet will take my money, lol. Would it be terrible to just blindly treat them all for coccidia?
Click to expand...

Of course they'll take your money, but I wouldn't give it to them unless they told you they could fecal test for avian parasites(not just coccidia), giving species and counts in their report.
You could just treat for coccidiosis, it wouldn't hurt them, but why treat for something they may not have?

Examine her yourself, crate to check check crop function and observe her poops.
I you use crate as I've described above it's easy to get fecal samples if vet can test them. Take pics of poops before gathering samples so we can see.

Oh, and...Welcome to BYC! @girloscruff
Where in this world are you located?
Climate, and time of year, is almost always a factor.
Please add your general geographical location to your profile.
It's easy to do, (laptop version shown), then it's always there! 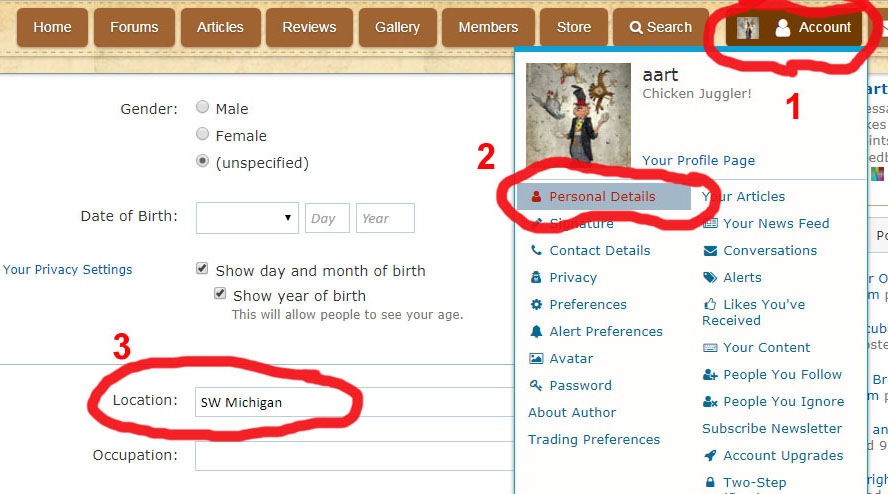 I am in Greensboro NC.

Her poop isn't bloody but she does have diarrhea. I'll set up her isolation crate later today.

Welcome to BYC! Sorry I don't have any advice. Hope she will be okay.

A Couple of Behaviors