No more tarp over run, Now has a Roof

Since hubby had gotten sick and was on life support for 9.5 days the end of May(22nd) figured our plans for the run roof would have to wait until next year. Found he has Chrons, he is doing good, and it is being controlled with Humira and Methotrexate, also has to take Folic Acid.
Hubby saw on Craigslist some PCV roofing panels and a couple of metal roofing panels for $30. I asked him why. He said I have been stashing some money (learned my trick...

) to do the run roof, it's your Birthday present. Had me contact them to see if they still had them on Saturday. They still had them. We said we wanted it, if Sunday was good for them. Said sure. There was 7 brand new 12ft PCV Panels and 2 12ft metal panels, 5 used PCV Panels (had used as some skirting). Picked them up Sunday morning.
Then after unloading hubby said let's go to Home Depot and get the wood, corner braces, screws and waterproof stain. He cut the angles needed and I cut the length on Monday, then I did the waterproof stain. It was a lighter colored stain than what we used on the run panel, but I said that is alright. Did finishing touches today, put on kick panels. Hubby put the weather vane and flag pole holder (and put our NFL Team flag up). Here is the roof upgrade...no more tarp over the run! There are panels like the sides under the new roof. The sign on the coop says Kings Klucks. We have Blue and Green LED light strings around the fenced area, stapled on the run & coop on a remote, push of a button and area is lit up.
Have the 2 new metal panels, 4 used panels(all 12 ft length) and smaller pieces left. 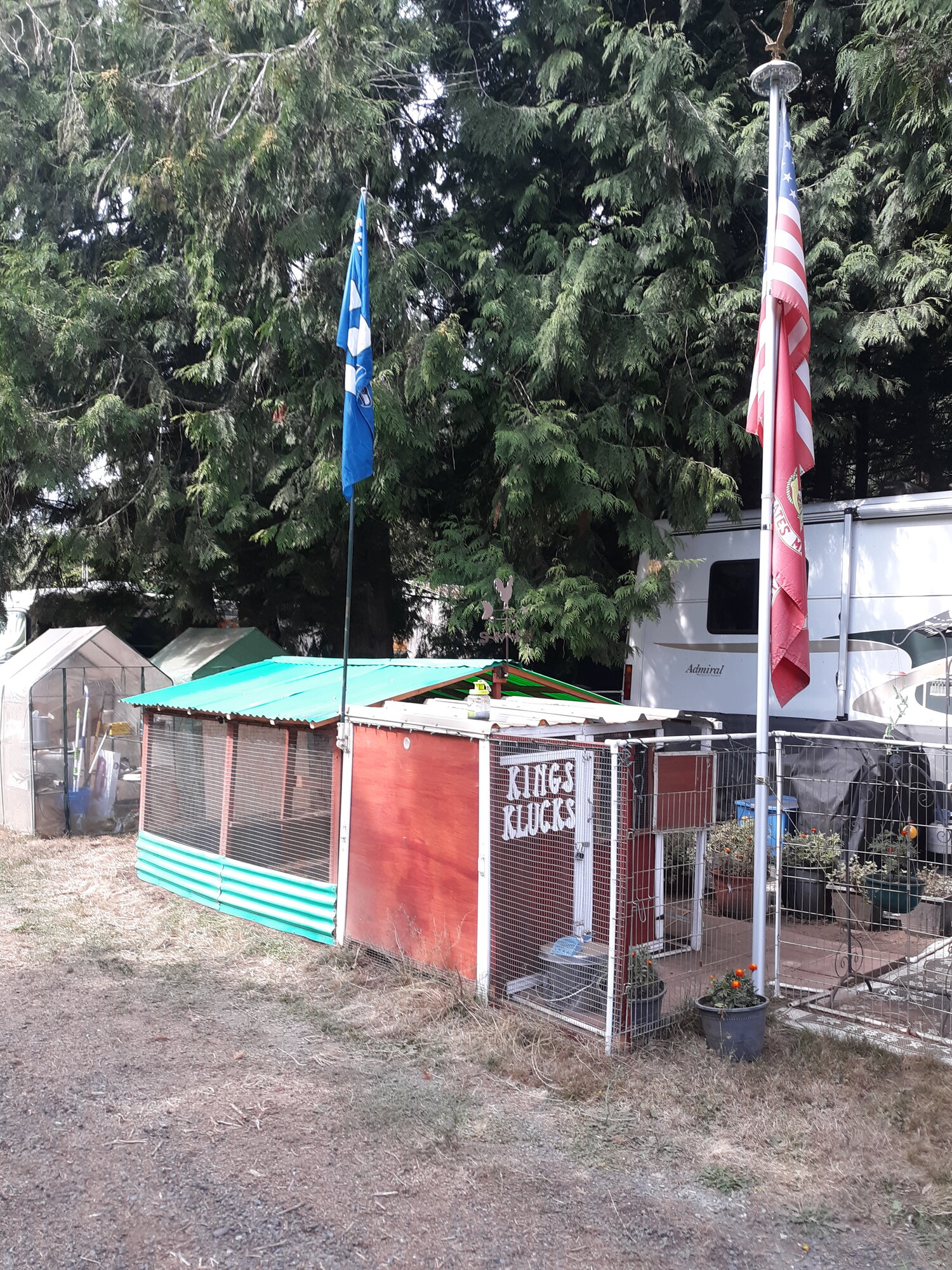 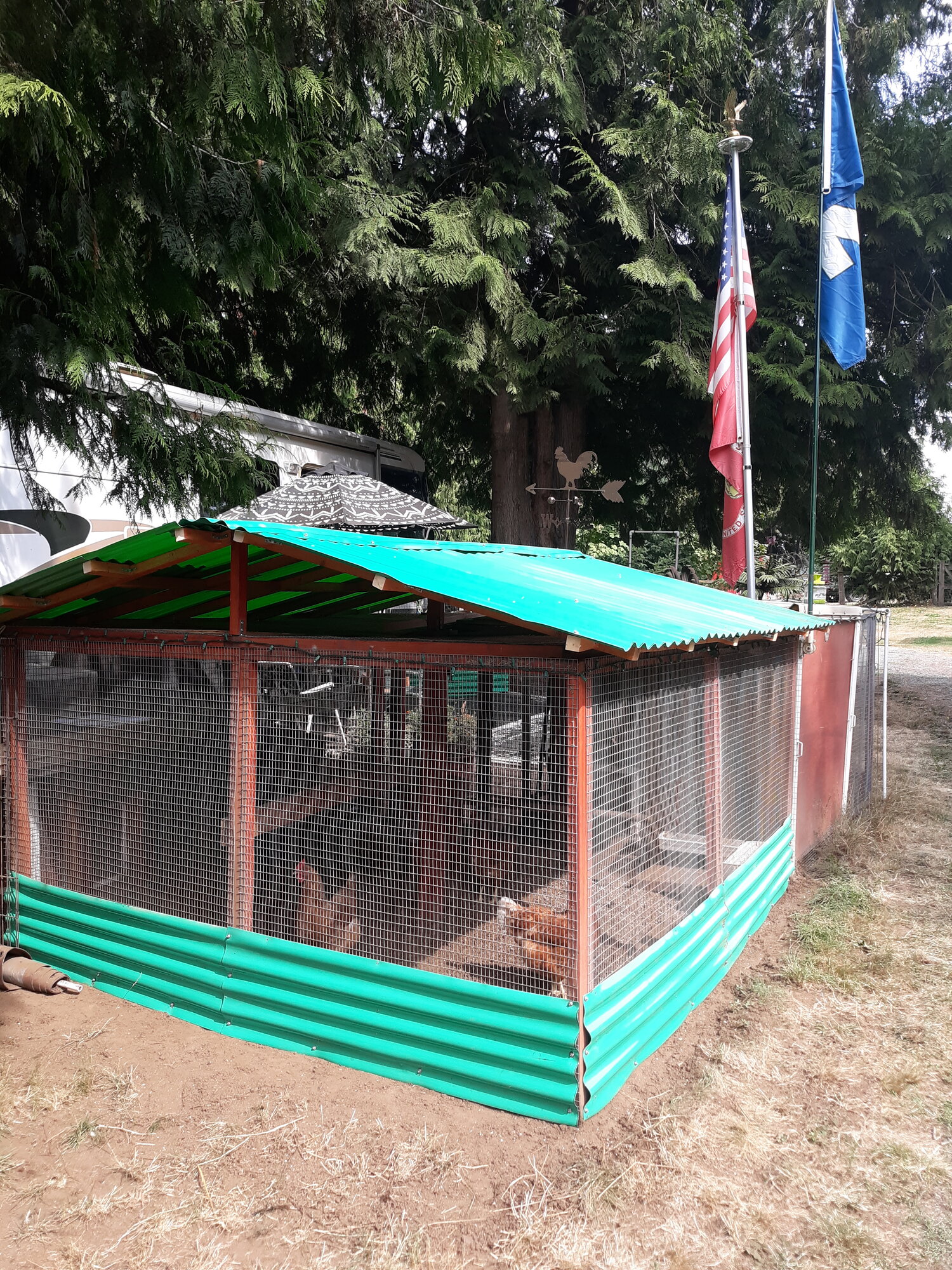 Good to hear things are looking up!

I am sorry your hubs got so sick. That had to be very stressful. Very good news that he is doing well.

Your run roof is a great addition.

That's looks so nice! Glad your hubby is doing better.

Prayers for hubby's health, and 3 cheers for an awesome job done together. what a nice birthday surprise for you and your girls
Last edited: Sep 7, 2019

Good thing we worked on it all week to get it done by today. Had a chance of rain they said slight. Slight my hiney... thunder, lightening and coming down good. Not complaining we need the rain.

Well done! Isn’t it such a relief to have a solid roof?!? Good to hear your husband is improving, hopefully these meds will keep any flare up from Crohn’s disease in check!

fldiver97 said:
Well done! Isn’t it such a relief to have a solid roof?!? Good to hear your husband is improving, hopefully these meds will keep any flare up from Crohn’s disease in check!
Click to expand...

It sure is a relief , no more going out and having rain puddles on top and getting wet getting it off. And putting on kick panels, no more shoveling buckets of dirt and putting back in run.

Thank You for the continued well wishes for hubby. Knock on wood. He hasn't had a flare up since starting the meds. Friday he got the heart monitor off, sent in, now have to wait to hear if the afib is gone or minor to where he can get off the Warfarin. Cardiologist thinks the afib was caused because he was so sick. Since he didn't have it when admitted

We got a thunderstorm last night. Run nice and dry except at the door where the rain splashed in from the walkway. Have next upgrade. Going to put kick/splash plate on the door side. Put a new matching roof on what was the brooder, now storage and put a skirting around it. We have plenty of roofing pieces to do it. Thinking of putting skirting on 2 sides of the coop, over the apron. Hubby said let's change the coop roof to match the run roof, since there are a lot left over.
I said admit you like the chickens. He won't admit it, said I like their eggs