NOT a Mille Fleur!!!

This Tuesday will be Three weeks since I picked up my Mille Fleurs from Meyer Hatchery. I had ordered 8 Mille's. They had my 8 milles waiting for me. I left with 17 chicks, one silkie passed away the second day.

The remaining 16 chicks are supposed to be 8 Mille Fleurs, 1 Black Silkie, 3 Buff Silkies, 3 Creoles, and 1 Buff Brahma. Now I knew which ones were which, but now I am thinking one of my 8 mille's is actually a Buff Brahma!! Her comb is not a single comb like the Milles and her feathers are coming in more buff with a bit of lacing to them.

These are the best pics I could get. Am I right? Is she a buff brahma??

And this is the best pic I can get of her feathers, I will try to get another one later.

I won't be disappointed if she indeed turns out to be a she, as I think the extra Buff Brahma I picked out that day is a HE. Her comb is small and she is a lot smaller than the other buff brahma in there.
Last edited: Sep 21, 2008

That is what my buff brahma looked liked. Not what mt Mille's looked like. Ask the realsilkechick. She breeds them....at least I think she does, that's where I got my eggs from.

i think millies come out more white w/ black dots, then the brown fills in. i could be wrong, but the few millie colored birds i have usually feather out that way.

What breed did you order in Mille Fleur?? D'Uccles? I bred Mille fleur D'Uccles for 2 yrs and they first feather in rusty buff and with each molt get more and more white/black tipped feathers.

Also as a friend of mine who bought a pair for her son to keep, she hatched 2 eggs and the chicks are tiny, half the size of her same age silkie chicks. She had never seen chicks so tiny.
They drove her crazy cause they kept getting out everywhere. She also asked me if they are crossbreeds because their chicks first feather out all solid orange. I told her to wait another month and then the first tipped feathers started to molt in.
Last edited: Sep 21, 2008

Here is a pic of my Mille as a chick. Hope this helps...

Here is one of my 12 week old Mille Fleur Roo's 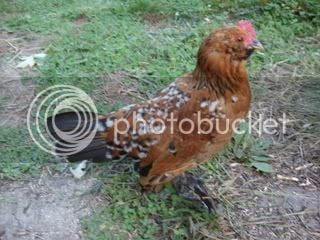 I know she is NOT a mille because she does not have a single comb, she has a pea comb.

Even her tail feathers are coming in the same way my Buff Brahma's that are now 5 months came in.

It's ok either way with me. She is a gorgeous little chick!

Are my chicks old enough to sex?

Supposed to be a mille