Ode to Old Hens... Pictures of the Seniors in Our Flock

My original flock of ten hens and Hawkeye are all gone. Sunny was the last, passing on a few months ago at the age of 6 1/2 years. She would have been 7 in January. The next wave is a full year younger. Some of those are also gone, including our beloved Suede, who died in September. He would have turned 6 in January.

However, Suede's four hens are still kicking, including big red Meg. Meg will turn 6 years next month, Dusty and Nugget will be 5 in a few months and Hope is the "baby" at less than 2 years old (she hasn't laid in months due to some reproductive malfunction and is probably dying). My Buff Brahma, Caroline, raised with Suede, will also turn 6 in January, and is my last remaining hatchery hen. She has earned her place in a rooster-less coop so she lives with the elderly, arthritic, Barred Rocks, Becca and Amanda, also about to turn 6, along with my black Ameraucana hen, Gypsy, who just passed her 5th birthday, Fern who will be 4 years old soon and lives with the old hens because Isaac hates her, LOL, and my black Rock, Emily, who has a bum leg and doesn't need a rooster hurting her. Becca, Amanda, Gypsy and Fern are laying regularly so never pay attention to anyone who tells you that hens quit laying after the age of two.

Here are the pics I promised, first of Suede's lovely girls. Beautiful blue Dusty started crowing yesterday, my first ever crowing hen! I thought someone was dying in that coop until my DH saw her stretch out her neck, flap her wings and belt out a deep throated crow. She did it 7-8 times and it scared me to death thinking someone was having a seizure in there. Guess she misses her big old blue man more than we knew. She hasn't laid an egg since he died in September; in fact, none of his hens have, and Dusty and Meg were laying prior to losing Suede.
Click to enlarge: The old ladies in the special coop: Caroline, Queen Bee of any flock she is put into; she was laying early this year. We call her the Queen of Sneeze-she has always been a daily sneezer, at least for the last five years of her life anyway. See that white barred feather in Gypsy's tail? That is what we call her "Zane feather". She has had it since she and my late, crippled Barred Rock rooster, Zane, became best friends. It's the weirdest thing. It's one wide white bar, always on the same feather, like she has a hidden barring gene, but of course, she can't-she's a pure black Ameraucana hen out of good breeder lines. The bond they had was touching and amazing, though she was always in the main flock with whatever rooster was in there at the time. These are not all the old girls, however. Two Ameraucanas, Nora and Snow, are in the main flock. Panda, Zane's daughter with an Ameraucana hen and Gypsy's half sister, is in Zane's old cage as she is molting badly and very out of sorts. They are all going on 5 years old now.

ETA: Felt bad for leaving Snow and Nora out so here they are. Snow is the splash, Nora the blue Ameraucana you see in the second photo below. Isaac and his two Delaware hens aren't so young anymore themselves-he, Ellie and Georgie will be 4 years old in February. Also shown in the first pic is Georgie on the nest edge and in the forefront, Neela, one of my 2 1/2 year old blue Rocks. I think someone forgot to tell them that they are "senior" as they look fantastic.

Thanks! I felt bad for leaving out Snow and Nora so I added their pictures to the original post. And I also forgot my EE hen, June, a gift from a good friend years ago. June is going on 5 years old now. Not sure I even have a current pic of June.
Last edited: Dec 2, 2012

Speckled hen, your birds are soooo beautiful. Does Snow have any offspring out there? She is really lovely.

Thank you! As a matter of fact, Snow has one son, the only chick to ever come from Snow. She is an expert at rooster-avoidance, but Isaac managed to get her at least once. Her son is owned by Cetawin and his name is Storm. He would be considered a Delawegger, but he is the most unusual one we've ever seen. I'm sure she can post a picture of him for you on the thread if you're interested.
Last edited: Dec 2, 2012

I need to to get a new pic of him but this is Storm at almost 8 weeks old. He is black with white markings...the white and black cockerel in the back right is his half brother,Zilla..both are sired by Isaac ... we lost Zilla a few weeks ago during a terrible storm. 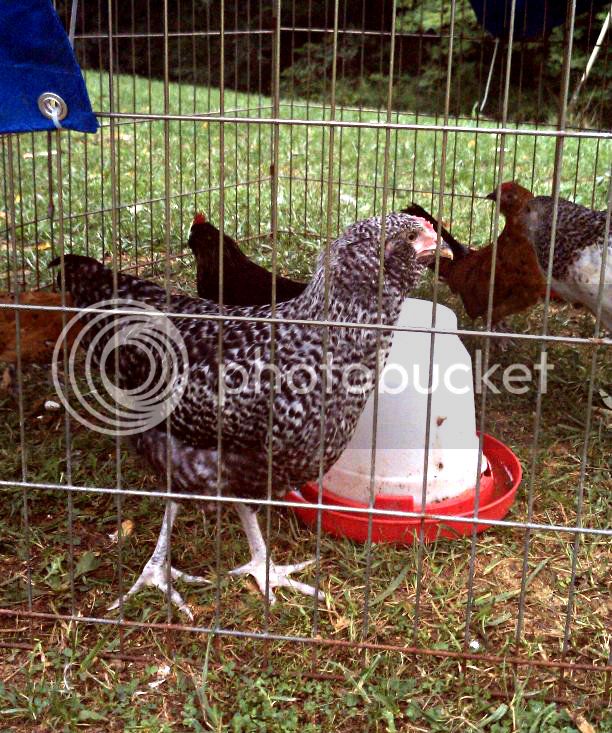 Such beautiful birds. It's hard to see our beloved pets getting older, but it sure beats living without them!

Lovely flock of old gals you have there.

They are beautiful, all of them.